I am frequently asked for salmon fly patterns for use on Carrowmore. I generally give the same answer – whatever you have in the box that you have confidence in on a size 8 hook. That may sound like a cop out but the truth is that I have seen salmon caught on so many different patterns it is hard to say which are the best ones. I remember being in the boat with Rocky Moran one day when the lake was not fishing at its best. In a small ripple he rose and hooked a salmon and as he was playing it out I asked him what he was using. He smiled and said ‘you will see’. Sure enough, the grilse was duly landed and there in his scissors was a variation of a Green Highlander of all things! I would never have tied that on the end of my line in a thousand years but it just goes to show that you can’t be too dogmatic on Carrowmore.

On a bright day something with some yellow can do the trick, especially if it is cold as well. I don’t carry too many flies with yellow in their make up as I almost invariably turn to a Lemon Shrimp if I want a yeller’ pattern. It is a handy one to have in the box for spring fishing and I dare say it works for the grilse during the summer too. I vividly recall fish a wee spate river during a falling spate one May many years ago. Salmon were running through and I had already landed a couple that day. I was fishing a tiny pool, only a few yards long and I turned a fish to the cascade I had on. He didn’t touch the fly, just rising like a trout to it instead then rolling away showing his side to me as he turned. I chucked the fly back at him a few more times but without response so I went back upstream a few steps and changed to a Lemon Shrimp. For once everything came together perfectly and the fish took the Lemon Shrimp with an ostentatious head and tail, a lovely fresh salmon of six pounds.

The Lemon Shrimp works on Carrowmore too so here is how to tie this fly;

Rear hackle: GP red breast feather, wound. Some anglers prefer the tail to be made of bucktail dyed red.

Eyes: Jungle Cock (Optional in my opinion, I have caught salmon on flies with and without JC eyes)

The exact shade of yellow is up to you. I have seen some which are almost golden olive the yellow is so dark but I much prefer a bright lemon shade for the floss and the middle hackle. I have also seen this fly tied with the front body formed of bright red floss but I haven’t tried that variation so can’t say if it works or not.

I mentioned the colour green earlier. There is a fabulous version of the Green Peter which catches a lot of fish on Carrowmore each season. The pattern itself is simply a standard Green Peter, the big difference is the hook it is tied on and the number of hackles used. Here is the tying I favour:

Hook: A size 8 long shank. Something like the Kamasan B830.

Body: Pea green seal’s fur. You can add a butt of red seal’s fur if desired.

Body hackle: Red game, palmered. Give it plenty of turns.

Wings: A bunch of brown squirrel hair as an under wing to give strength and then hen pheasant tail tied over the hair.

Head hackles: red game cock. Tie in and wind as many hackles as required to cover 1/3 of the hook in front of the wings. 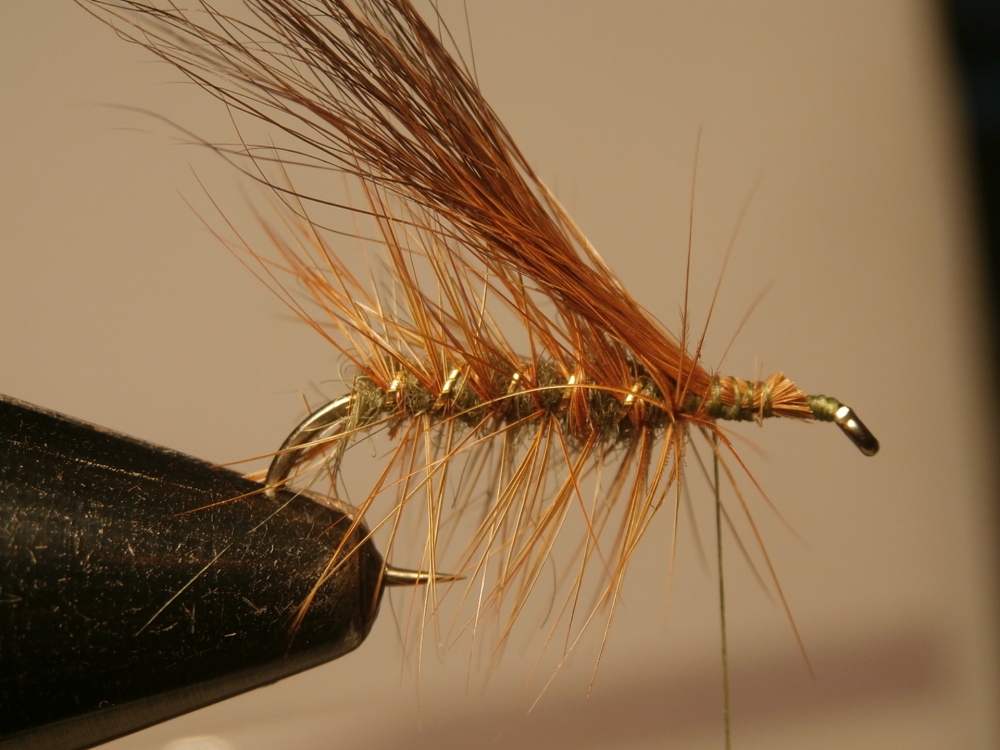 This is an easy fly to tie but pay attention to the proportions. This fly works because of the disturbance it causes in the water so the multiple turns of cock hackle at the head are vital.

I fish this fly on a different Leader too. I prefer to fish only two flies when using the long shank Peter, with this fly on the dropper. I then add a tail fly relatively close, say about 16 inches behind the Peter. The tail fly is always a small size too, maybe a size 10. Fished on an intermediate or slow sink line and retrieved vary fast, this can produce explosive takes so I use a minimum of 12 pound b/s for the leader.

This fly also catches sea trout just to add to its general usefulness. I can thoroughly recommend you tie up a couple of each of these flies and keep them handy when on Carrowmore.

PS: latest reports from Carrowmore are they are still waiting for the first fish of the season. With strong winds yesterday and today I expect the water to be churned for the next few days. On the plus side there should be fish coming in with each tide now.