The pier at Roonagh is a favourite spot to fish and each summer I try to get over there to spin for Mackerel (macks). The great thing about Roonagh  is the views across to the islands, so even if the fishing is slow you can still be captivated by the ever changing vista.

Yesterday evening seemed to be a good one for such a trip. What constitutes optimum conditions for Mackerel? I much prefer calm seas and good water clarity. Mackerel hunt by sight so dirty water makes it harder for them to locate my lures.

Off we set and arrived to find the pier deserted – not a good sign! The word spreads like wildfire when the macks are in and the locals throngh the short pier, heaving strings of feathers into the sea. Trust me, venturing on to the pier when the fishing is at its height is not for the faint-hearted. The empty pier which greeted us was a clear sign the fishing would be tough.

Tackling up I decided to try a bait ledgered on the bottom as well as spinning, so the 4 ounce beachcaster was strung up and a sandeel cast out. Happy that everything was as it should be I turned to the spinning gear and perched myself in my favourite spot at the end of the pier. The old rythym of cast, snap back the bail arm, retrieve was repeated numerous times, each cast being completely ignore and shiny lure made its jerky way back to me totally unhindered by the fish.

Even as I had been tackling up my attention was drawn to a tiny boat out in the bay. It was too far out for me to be sure exactly what kind of craft it was but somehow it didn’t look ‘right’. As I was fishing the blue dot in the middle distance came a little closer and I could see it properly. Two men were fishing off of an inflatable dingy barely 12 feet long and with a freeboard which could be measured in millimetres. The sea calm enough for Clew Bay but even still there was a wave of maybe a couple of feet running. The bright blue dingy could be seen flexing in the middle with every wave which passed under it. I personally would not have got into that thing in a bath, never mind on the Atlantic! The closer the two anglers came the clearer I could see them and it became obvious they were not wearing life jackets. I was both stunned and angered in equal proportions, stunned at the stupidity  of not wearing life jackets but also angry that if they got into trouble the press would have been happily reporting two ‘fishermen’ were in difficulty. None of the fishermen I associate with would ever do something this foolhardy. Even the wash from the small ferry would have been sufficient to overturn that joke of a boat.

The beachcaster gave a languid nod, no more than that. Tightening up the line I could feel a very faint bite so I struck with an upward sweep of the 12 footer. There was a considerable weight on the end but not much of a fight as such. Out of the crystal clear waters emerged a mass of thick, brown weeds. Somewhere below a dogfish was wriggling so I hoisted fish and weeds on to the concrete. A lesser spotted dogfish, very dark in colour, had swallowed the sandeel. Far from the most exciting catch, he was none the less a welcome sight on an otherwise fishless evening. Unhooked, I lowered him back into the water and he swam off, none the worse for his adventure and probably thinking that was the last time he was going to eat a sandeel he found lying on the bottom!

At least I caught something!

We fished on but the macks were simply not there to be caught. Having failed to locate them on the north Mayo coast and now at Roonagh the next venue will be further south. Sunday may be a good day. 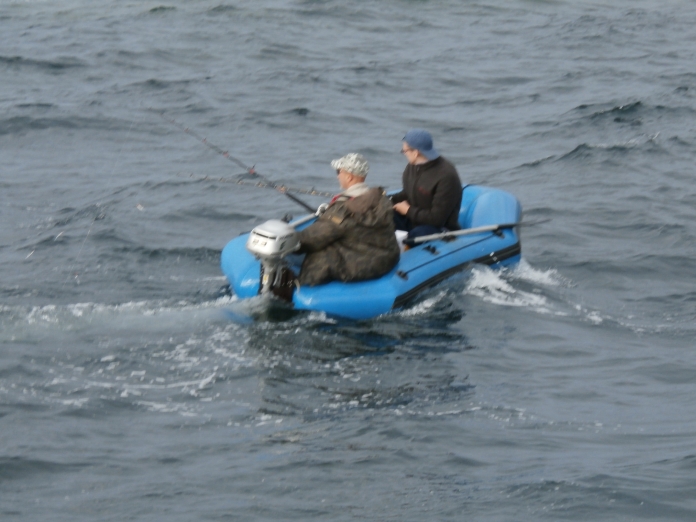