Just for a change there was some drizzle this morning. You could not dignify the gently falling moisture with the title of rain, it was just descending wetness which barely kept the dust down. Today was going to be a good day, today I was fishing in North Mayo.

High tide at 2pm meant a leisurely start to the day. No need for an alarm, strong black coffee in bed, thick slices of hot, buttered toast. Bliss! Then an hour or so spent sifting through the sea fishing gear to make sure I had everything to take with me. Don’t you hate it when there is a little, niggling voice in your head questioning if you have packed this or that? Today I had time to eliminate all of those negative thoughts and the battered black tackle box was stuffed to overflowing with all manner of goodies to tempt the fish.

Ben was going to be my companion on this jaunt and we rendezvoused at 11 am as planned. The road was quiet as we drove up that well trodden road to North Mayo. The heat was building already so we motored with the windows down, the bird song brightening the journey for us as we sped through the gorgeous countryside. It takes the guts of an hour to get to Portacloy, past the foot of Nephin, across the bog to Bangor then down the ever narrowing roads until the lovely bay comes into sight.

The plan was for Ben to spin and fly fish from the beach while I tried bait fishing from the inner pier. Ben was targeting sea trout and Bass while I was hoping for flat fish on the sandy bottom. Tackled up, we went our separate ways. Ben worked the waters close to the sand, methodically casting and retrieving all the way along the strand to the rocks at the far end. He repeated the exercise by returning to his starting point but the fish were not responsive. Meantime, I set up a pair of beachcasters and hurled sandeel baits as far as I could, then waited………………… And waited some more…………………. Nothing!

Now this was more than a little perplexing as Portacloy is quite possibly the most productive mark in the whole county. I have never landed a big fish here but there are usually plenty of smaller fish to keep you busy. Today there seemed to be no fish hanging around at all. Even a cormorant which was fishing right next to us came up with an empty bill each time he dived. He swam off in the end and I couldn’t blame him. By now Ben had come back to the pier and explained he had managed to wade too deep for his boots and was soaked. He removed the offending socks and promptly went to sleep. I fished on, grimly determined to show Ben and that bloody cormorant that there were fish there. I was wrong. 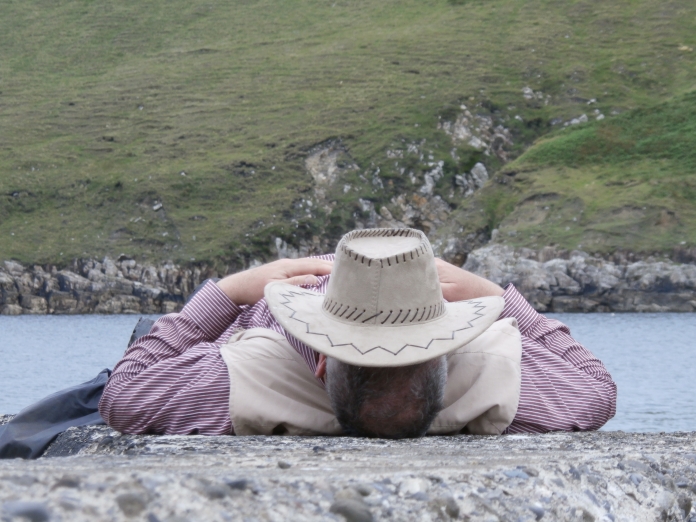 The tide reached high water and I roused Ben from his slumber. We needed a plan B. He suggested a mark he had seen but not fished, Carrowteigh. It was only a short drive away so I agreed. Let’s give that a lash so. 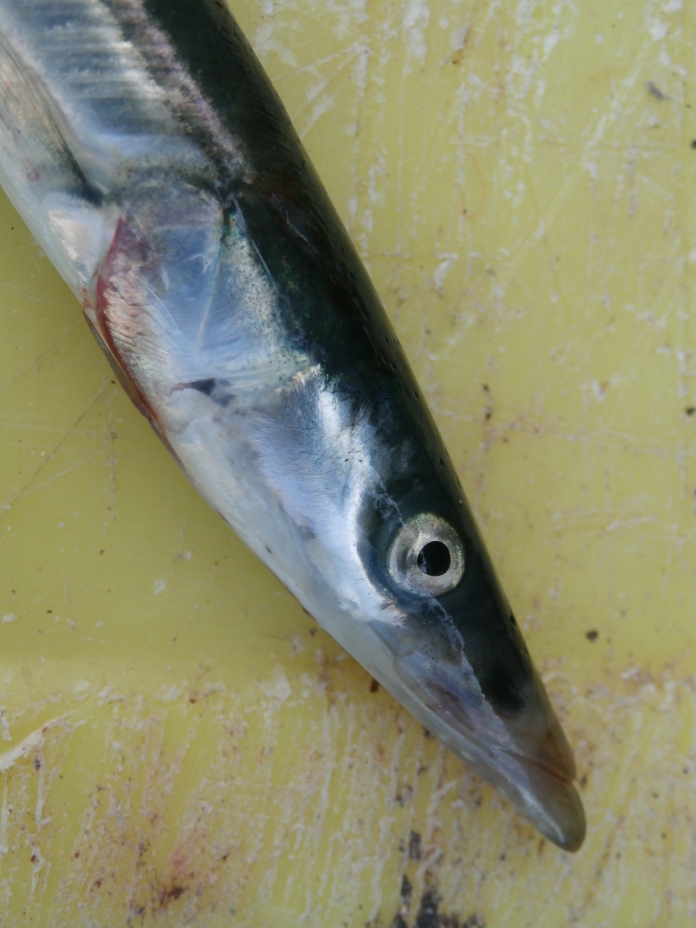 Head of a Launce

It was only the work of a few minutes to load up the Jeep and drive over to the new mark. Rods re-assembled, we were quickly back fishing again in crystal clear waters. The scenery was breathtaking, golden beaches and azure waters, Surely we would have more luck here?

Well, yes we did. We actually caught lots and lots of fish. The only issue was that they were Launce (Greater Sandeel). They are superb for bait but catching them on medium spinning rods cannot really be classed as sport. We fished the tide down the afternoon punctuated by the silvery eels grabbing our tiny feathers. I reckon we landed about 20 of them, enough for a number of baits as some of the Launce were huge. 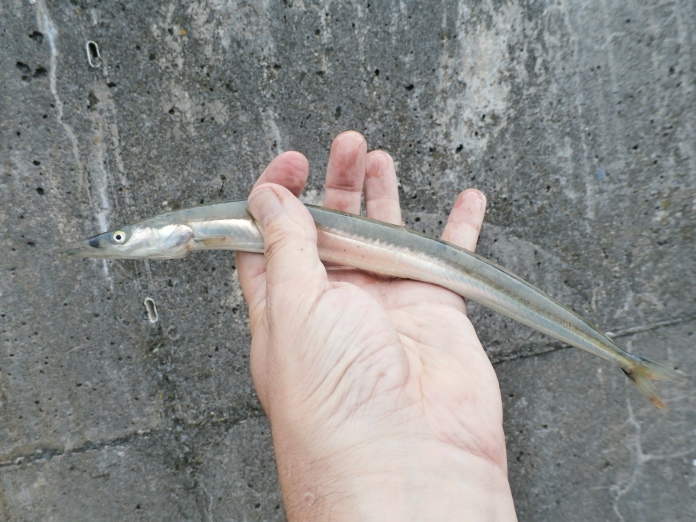 The photo does not do this gigantic sandeel justice, it was well over a foot long

I tried a small, rocky mark located across a field but only succeeded in losing lots of gear on the tackle hungry rocks. So I returned to the pier again my pockets lighter now as a few traces and lures were lost to the underwater rocks. All afternoon I was plagued with crabs stealing the bait. In the blink of an eye they could strip all the hooks of bait and even avoided being caught themselves. Until the very last cast!

A sandeel after only a few minutes attention by the crabs

We called it a day at 6pm, having not registered a single bite to the bait rods all day. Only the Sandeels saved the blank but we both enjoyed the fabulous weather and the fresh air. Shore fishing is often like this, a process of eliminating the places where the fish are not until you find where they are. I will be back on the edge of the sea again very soon, only this time I will head for the other end of the county. Until then…………….