It looks increasingly likely that my planned time off work will come to a shuddering halt way too early so I have been packing in some fishing over the past two days. Last Sunday I did some trolling for salmon. 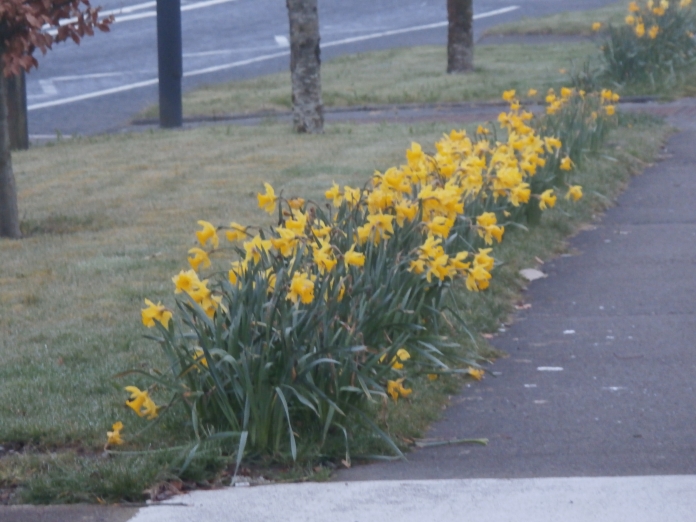 It started of grey. Very grey. A thick mist had turned the world silvery and damp as I waited to be picked up. At least the daffodils are blooming. We were dropping a boat off on the river and had agreed to fish during the morning. These simple plans were predicated on the rise on water levels due to recent rainfall. Salmon have been nosing into the Moy system in small numbers for a couple of weeks now so there seemed to be a chance they had penetrated far enough upstream for us to intercept them. With dry, settled weather forecast for the coming week Sunday looked like the best opportunity to catch a fresh springer.

We launched the boat and tackled up. The river looked perfect, high but dropping and clarity was even better than we had anticipated. Confidence high, we motored off upstream to cover the best lies. The winter spent re-equipping my trolling gear now stood me in good stead, new rod, line and lures were all at hand and ready for action. Unfortunately nobody had informed the fish that we were properly armed. The stillness of the weather was perfectly reflected by the comatose fish.

Next I tied on a Zebra Toby

And finally a gold Toby Smash got a swim

The early mist lifted to leave a lovely Spring day. The trees and shrubs are still a long way behind where they should be but with the increase in air temperatures there should be a spurt in growth over the next few days. Now is wonderful time to be out and about in the Irish countryside. New life will blossom very quickly as winter finally retreats. The swallows will return this week after their arduous journeys from Africa and the trout will start to feed on the newly hatched flies. That dread coldness which has haunted the country since last October will lift and warmth from Europe will envelope us in Ireland. Optimism is returning along with new plans and ideas. It is amazing what benefits some good weather can bring! 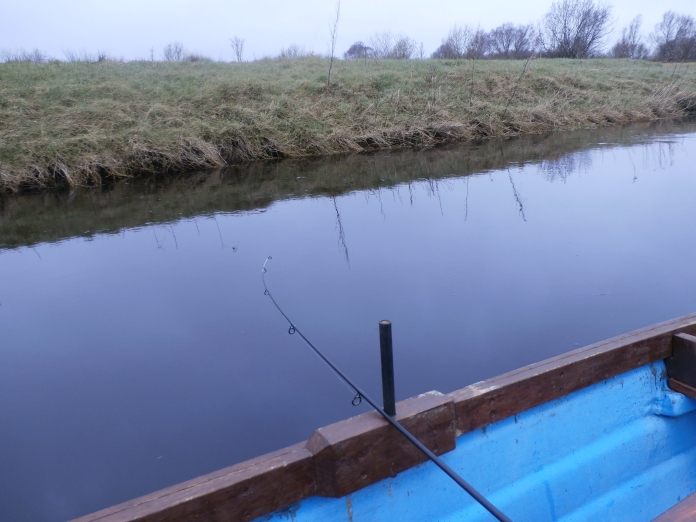 Even the improved climatic conditions failed to liven the salmon for us this morning though and we returned to the launching site near the bridge empty-handed. This is not unusual for the river these days as the runs of salmon grow smaller and smaller each year. By noon we were bumping along the road home.

This is not the most taxing way to fish but on days like Sunday it gives you an opportunity to sit back and take in the wonders of the natural world around you. A kingfisher flashed past us at one point, a blur of petrol blue and burnt orange. Larks were high above the fields and a huge cock pheasant broke cover close by us on the bank. Some days it is about more than  just catching a fish.

The afternoon was spent doing family stuff then off for a walk along the beach out at Mulranney. Tired, I went to bed early. I planned to fish the River Robe on Monday., maybe the trout would be more responsive!