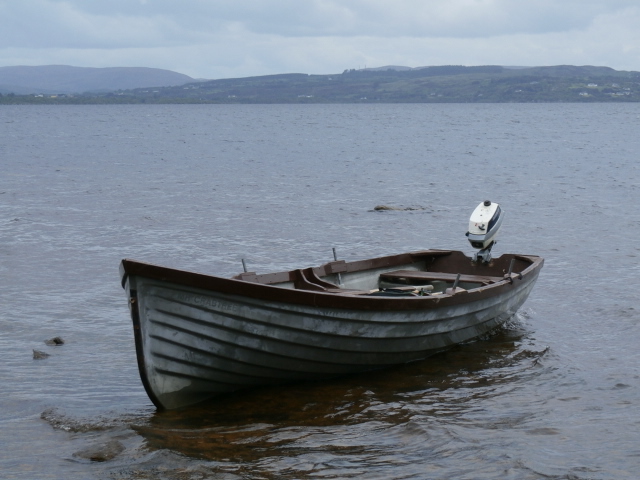 Saturday, 21.30 hrs: The modern version of jungle drums were beating a few minutes ago when I received a text to let me know that 7 or 8 salmon had been seen jumping on Lough Conn earlier today. That makes sense as I know there have been fresh fish running the river Moy for the past 2 weeks now. The gear is already stacked in the hall ready for the morning. I’ll need to buy some petrol for the outboard in the morning but apart from that small chore I will be good to go tomorrow.

Sunday, 6am: I am awake as usual and get up to do some odds and ends around before going fishing. Shirts for next week are ironed, dishes from yesterday evening are washed and dried, the pets, all that sort of thing. the weather looks good today with a stiff breeze out of the south-west and good cloud cover. The occasional showers which passed over Ireland yesterday have gone, leaving damp and cool conditions.

Oasis on the CD player as I drove out the quiet road to Pontoon. I was never really a fan but they had a couple of good tracks so I cranked up the volume and enjoyed the guitars as the green, green countryside slipped past. The boat required a little teeming (is that an Irish word or does everyone use it? Must check dictionary………….) after the recent showers but she was good to go apart from that.

looking south towards Pontoon Bridge from the Massbrook shore

All loaded up, I pushed off and motored around the pin and started drifting across the mouth of Castlehill in a nice 6 inch ripple. Once again, the most obvious problem was the all too evident lack of fly life. No olives, buzzers, peters or mayflies were on the water. with no response to the wets I set up a trolling for and turned her into the stiff wind and chugged down the Massbrook shore, over the salmon lies which I had hoped would be tenanted today. 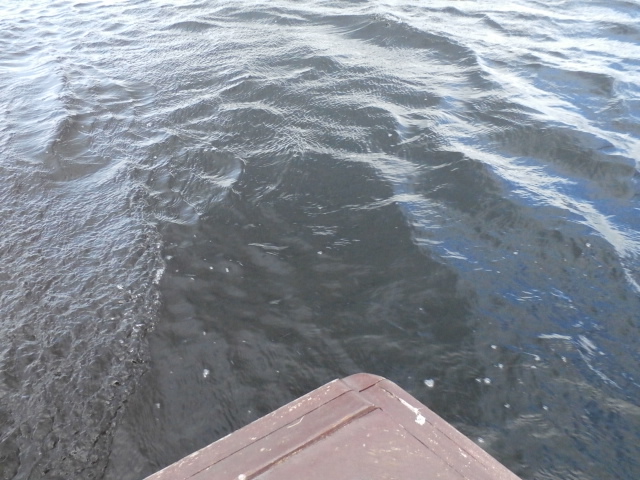 The drop off (Yes, I know you can hardly see it!)

There is a major drop off which I like to troll over and I tried to capture it for you but as you can see it is not too distinct. On one side of the boat there is about 3 feet of water and the stones on the bottom are clearly visible; look over the other side and you are peering into an abyss, only inky blackness to be seen. here is a great place for pike as the patrol this edge but salmon and trout also favour this border between two worlds. 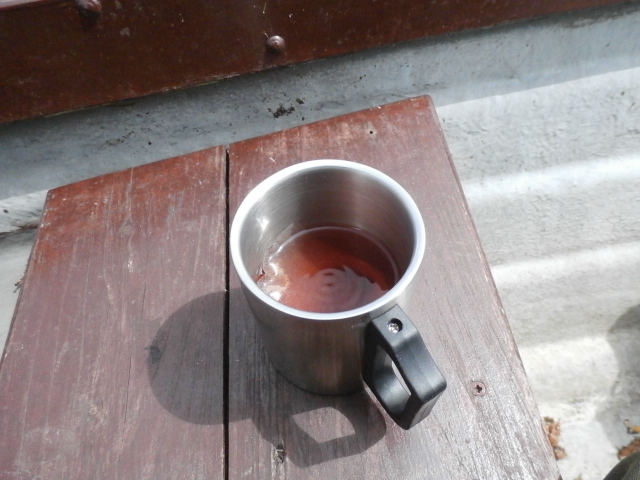 A nice cup of cinnamon tea kept my spirits up as I ploughed through the waves a couple of hundred yards off the Massbrook shore. Still no flies to be seen and certainly no silvery salmon leaping clear of the water! Trolling is a dull game but it gives you a chance to look around and plan drifts with the fly rod. the wind direction and strength made the lower part of Massbrook a good location to try the fly so I killed the engine and set to it with the 11 footer and a team of three. 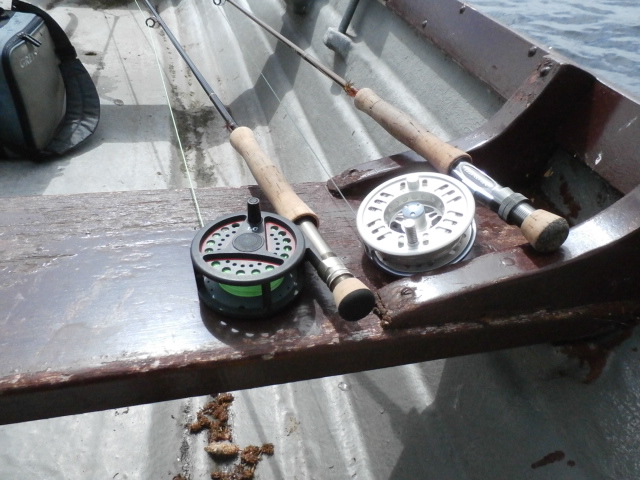 I had only dropped the flies over the side at the start of the first drift when it was taken by a small lad of 8 inches. He fell off as I swung him in, saving me the problem of handling an undersized fish. Next cast and a repeat of the same with a similar sized fish. the drift gave me 4 of these small trout but no trace of large game. 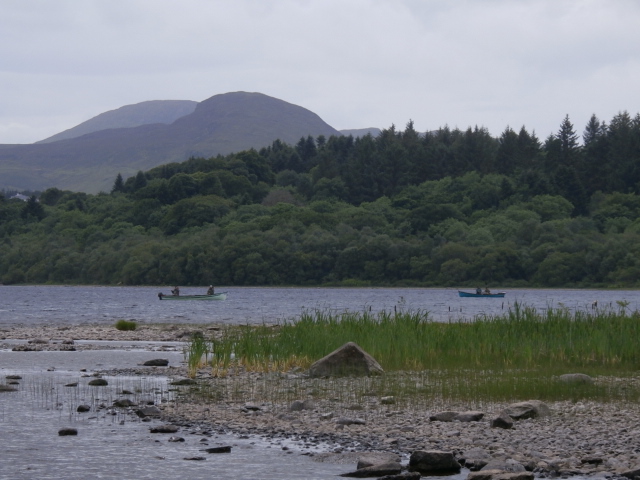 other boats were finding fish in the area

I rowed close in for the next drift, dodging occasional rocks with the oar and still catching immature brownies. A bright green bumble was doing most of the damage on the bob. I finished the second drift well out in the main lake as the shallow water here stretches out a fair distance from the shore. Still no signs of salmon though and since it was salmo salar I was really wanting to catch it seemed prudent to go back to trolling again over the usual spots where they lie. I changed to a gold spoon and dragged it 30 yards behind the boat for the next couple of hours in excellent conditions. 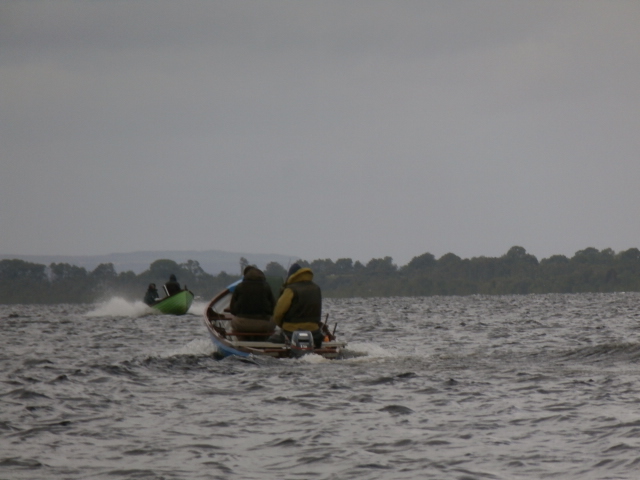 boats on the move

Other boats wee constantly coming and going, a sure sign the fishing is hard. I pulled in to stretch my legs at one point and contemplated possible options. 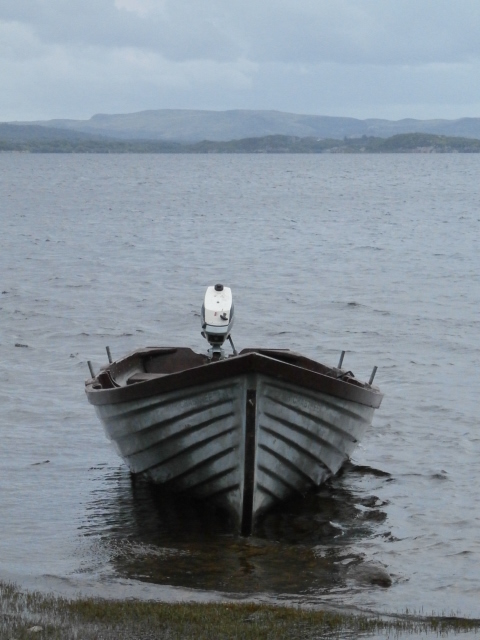 The reports of salmon jumping offered only a slight comfort. Once salmon get in to lough Conn there are no barriers to them and within hours they can be anywhere in this large body of water. Most will head right for the mouth of the river Deel and that certainly seemed to be what had happened this week. 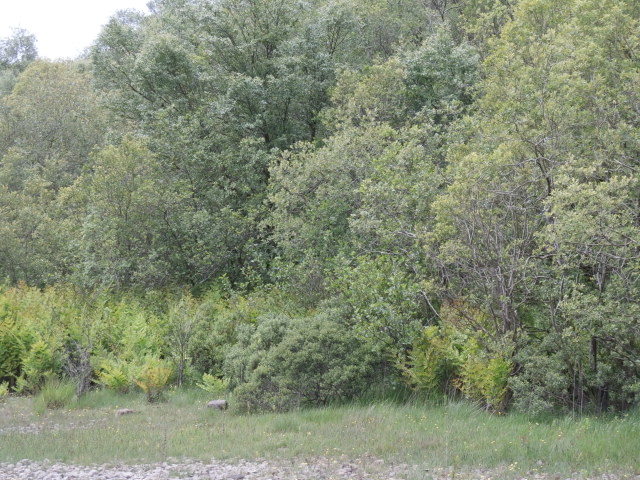 Time always speeds up when I’m fishing and a glance at the phone showed I had better think about starting for home. Still the other boats were dashing too and fro, 15hp engines straining and white wakes snaking across the surface. 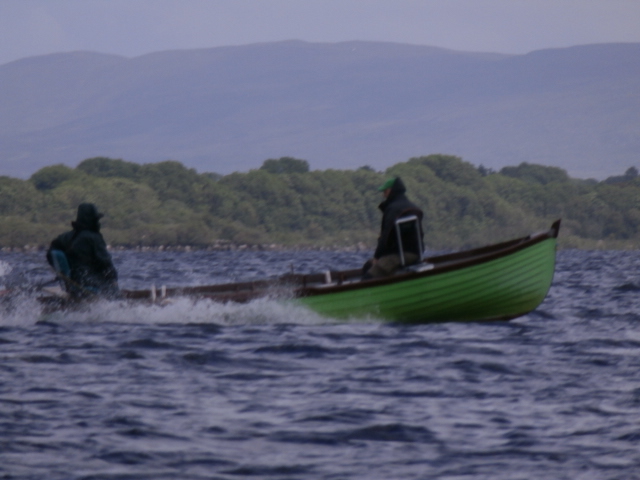 I took a leisurely spin back to Pike Bay and tried a few casts around the pin with the salmon rod but by then my enthusiasm had waned considerably. I pulled the starter cord one last time and motored back to the reed bed where the boat is berthed.

The highlight of the day came on the road back home. Out of the grass on my side of the road, about 50 yards in front of me a Pine Martin appeared. Without even looking in my direction he hopped across the tarmac and disappeared into the trees on the other side. I saw him very clearly and I am positive it was a Martin. It’s unusual to see them in broad daylight like this. It’s great to see these marvelous creatures making a comeback after years of persecution. 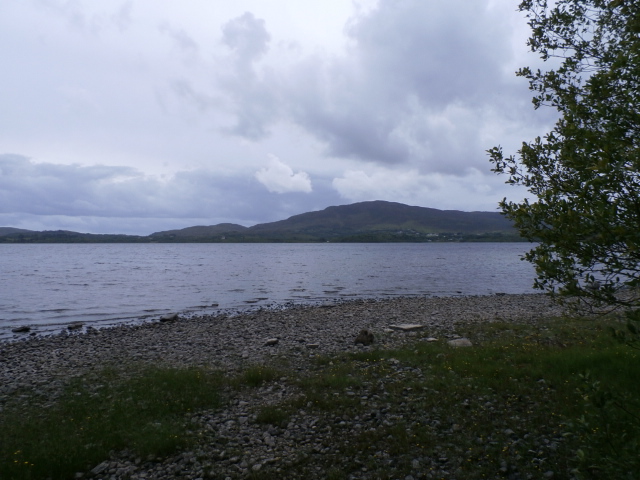 2 thoughts on “A quiet day on Conn”