It is just over a month until Lough Beltra opens (20th March to be exact) so I thought I would share some thoughts about tactics and tackle for this wonderful fishery. I fish it from the Glenisland Coop side, so I will restrict my comments to fishing from that side of the lake but as far as I know the same will hold true for the other side too.

Let’s start with the basics, when will there be fresh fish in the lough? Geography comes into play here and specifically the Newport River which drains the lough and up which all the salmon and sea trout have to pass. The Newport river is not big but it is relatively deep in most parts, meaning that the fish can move upstream more easily than is sometimes appreciated. A small rise in the water level usually encourages fish into the system and with only 8 miles to travel fresh salmon can be in the lough a few hours after the spate. Beltra acts as a buffer for fresh water after rain so the river is not as ‘spatey’ as you might expect. By the start of the season in late March there will have been a few spates and fresh salmon will be in the lough. Maybe they won’t be there in great numbers but there will be a few. Each successive rise in the water should bring a few more fish to top up the stock and this pattern will continue through the spring months. March, April and May are usually the best months of the whole season. 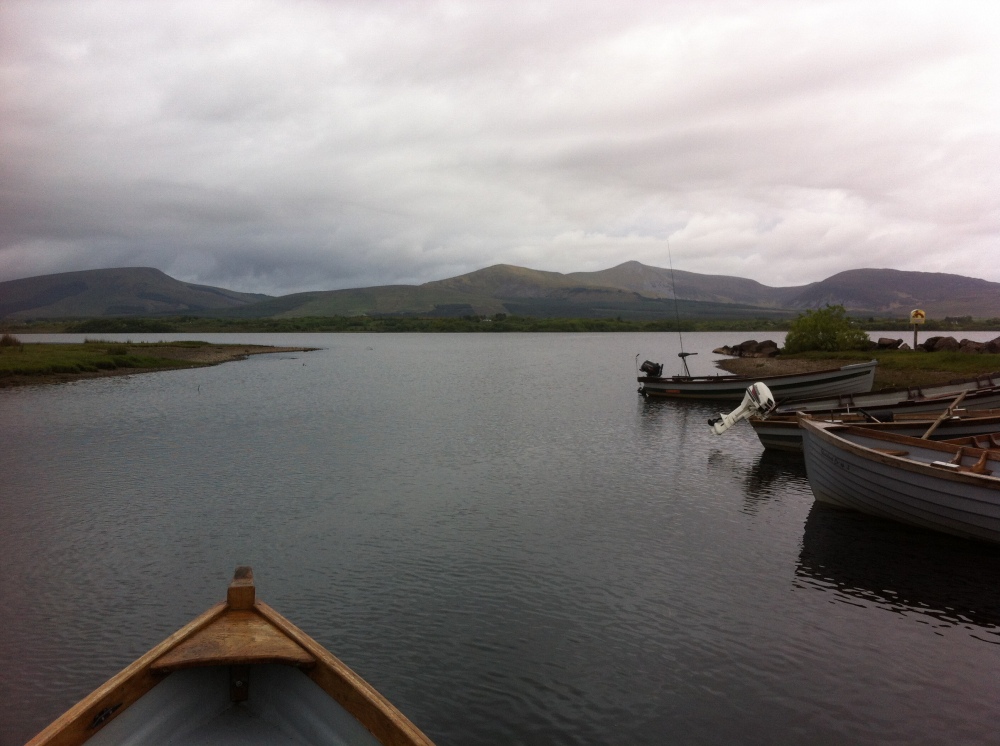 Grilse begin to arrive in June with the sea trout coming in from July onwards. While there are fish in the lough until the last day of the season it is lightly fished after July unless there is a big spate. So from this you can see that Beltra is primarily a spring fishery.

Non-anglers will never understand why us fishers need so many different rods. We do tend to go overboard I guess, but the huge range of different scenarios we face do provide a degree of mitigation for our excesses. Lough Beltra is going to provide you with a challenge because it has been my experience that to be consistently successful on the lough in Spring you will need to use a sinking line and a heavy one at that.To put his into perspective, most loch/lough angling for salmon is a top-of-the-water game with relatively light, floating lines and smallish flies. I am thinking about AFTM#6 or 7 floaters and size 8 to 12 flies dibbling and bobbed through the waves. A raw April day on Beltra is no place for such pretty fishing. Instead, we use AFTM 8 or 9 full sinkers and a cast of 2 or even 3 meaty irons in sizes 4 down to 8. Add in the best conditions are a strong South Westerly wind whipping up a 3 or 4 foot wave and you can see that delicate tackle is not going to be up to the task in hand.

Having established that heavy sinking lines are de-rigour for Spring time on the lough you now need to consider the rod required to lift and cast it all day. Many Beltra regulars avail of the power of a double-handed rod, between 12 and 13 feet in length. Rods which would not look out of place on the banks of the Dee or Spey can be seen in action here and they certainly are great weapons when lifting a heavy sinker out of the water in front of a fast drifting boat. They also keep the flies that little bit further away from you too which is no bad thing as size 4 salmon irons are not nice when they are whizzing around your head in a semi-gale. I personally have tried both single and double handed rods on Beltra and have settled on using a heavy single-handed rod over a double handed one. This is purely a personal choice and I would encourage first time anglers on the lough to bring both types of rod with them until they find which one suits them the best. I find casting with the double-hander from a boat uncomfortable and instead use a 10 footer with ‘a bit of backbone’ and the power to cast a 9/10 line. Think of the type of rods used to hurl big lures on the English reservoirs and you get the idea.

Let’s turn to the lines themselves now. As I said earlier, full sinkers are widely used and are very successful. Some anglers opt for sink-tips and these catch fish too. Then again I have seen full floaters used with 9 foot fast sinking tips added, and I must admit I have one of these spooled and ready for use on a spare reel. I would be lying if I said I knew exactly what the difference in depth these different set-ups can achieve. I suspect they all get the flies down to roughly the right depth. Ah, but what is the right depth I hear you say? I believe it doesn’t matter too much beyond the need to get below the surface of the water. All the salmon I have seen hooked on this type of set up take without showing, meaning they are at least a foot or so beneath the surface. They could be three or four feet down but it is hard to be exact due to the ever-changing dynamics of angle of line to drift of the boat + speed of drifting boat + rate of retrieve + sink rate of the line + height of wave + depth the fish is at + upwards movement of the fish to intercept the fly (I could go on). My point is that the salmon will take the fly as long as it is below the surface in the cold water during Spring.

Does this mean that you will never, ever catch a salmon during the Spring on Lough Beltra on a floater? No! Maybe you can. I just trust in my experience that sinkers are better. Look, once the water warms and we get into May/June a floater and smaller flies are both nicer to fish with and more productive, meaning you can scale down the rod and reel to match. But for the Springtime think big and strong and down below the surface. You wont go far wrong that way.

I have written before about fly patterns for the lough so I won’t bore you all by going over that again. As regards to lies, there are well-known spots where the salmon take up  residence and these are marked on the map. For those new to the lough I strongly suggest using the services of one of the excellent boatmen who will put you over fish. If you out on your own then simply stick to within 50 yards of the shore. Some spots you drift over hold fish and others don’t but the ‘hot spots’ are all close to each other so don’t waste time motoring around looking for fish, just drift along the shore as best you can in the prevailing winds. Beltra is a safe lough to fish with no hidden rocks to worry about. There is shallow water as you come out of the river mouth at the boathouse but no sharp rocks to damage the boat. Don’t drift too far out into the main body of the lough as it deepens quickly and the salmon prefer the shallows to the inky depths.

The weather here in west changes very quickly so if the wind rises to gale force or drops to a zephyr leaving the surface glassy calm just motor ashore and take a break. The chances are the wind will change soon and fishing can resume. My final advice is to enjoy your day. Too often I see anglers becoming frustrated with a lack of success. Try to relax and soak up the amazing sights a day on Lough Beltra provide. A spring day spent fishing for salmon is something to enjoy, even if salar is uncooperative! 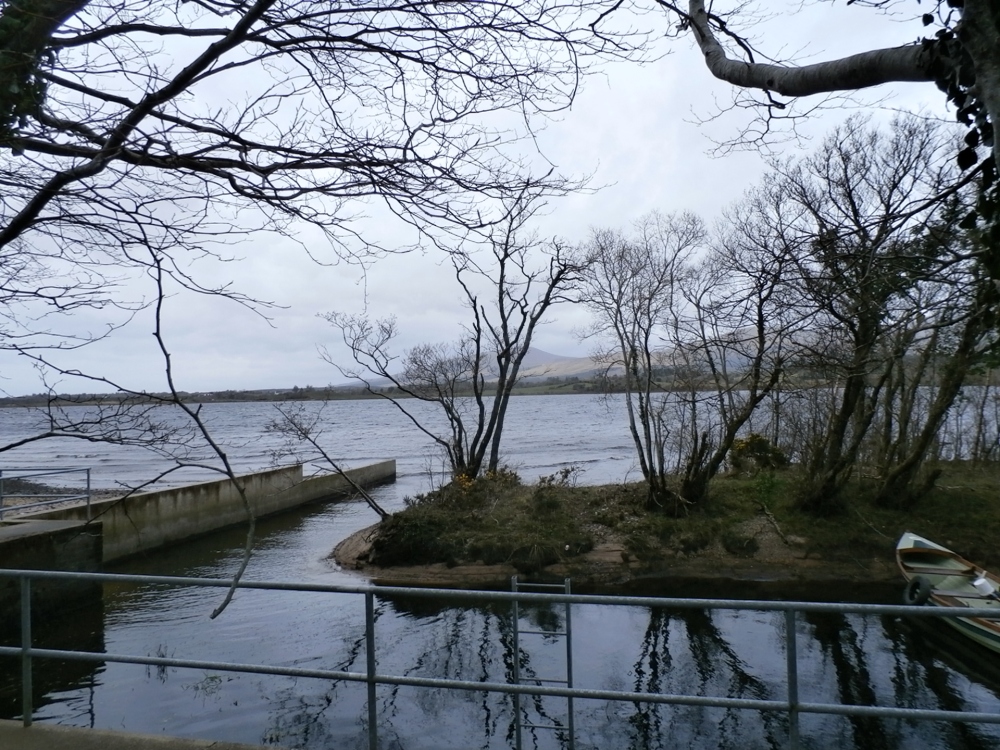 I will write a bit about boat handling and drifts on Lough Beltra in my next post.