The boat came with a trailer you see. It was part of the deal when I bought it second-hand (or pre-loved or whatever they say these days) but it was far from ideal for the job. It was one of those boat trailers fashioned in someone’s shed buy an enthusiastic welder from bits of mild steel channel and box section. Over the years I only used it a couple of times to move the boat from one lough to another but otherwise it lay in splendid isolation in the yard. This week that peace was rudely broken. It was time to divest myself of the whole shebang, the trailer had to go. 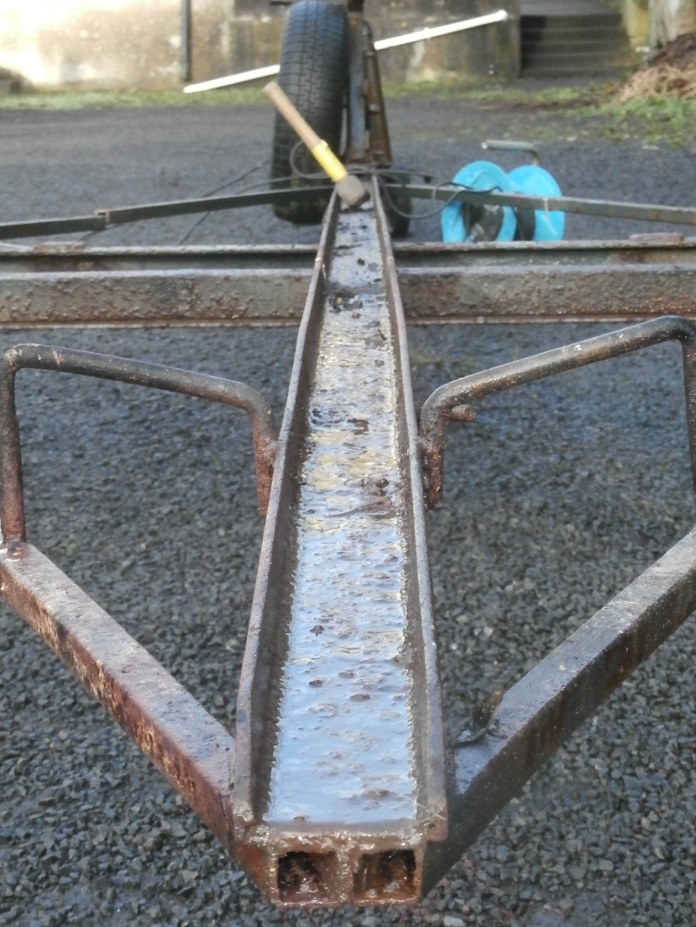 Tools were gathered, gloves and eye protection dug out out the darkest recesses of the shed and copious quantities of WD40 unearthed then loaded into the car for the short journey to the yard. The idea was to cut the trailer up into three parts which could then be moved around with ease. A local scrap dealer would take the remains off my hands. All I had to do was chop the steel up.

An angle grinder made short work of the 25mm box sections but the heavy central channel was a tougher nut to crack. Discs burned out rapidly and new supplies were hastily purchased. Sweat dripped, curses flew and the grinder grew hotter and hotter. Eventually, the tail end was sufficiently weakened to bend it until it snapped off. Phew!

back part cut off

Closer inspection of the winch showed that while there was some surface rust the unit was basically in good condition, so I unbolted it from the frame and took it away to be fully reconditioned. The same went for the hitch mechanism but it was well rusted in place and some mighty effort was required to shift it. The 19mm bolts had been there for years in all weathers and needed a lot of ‘persuasion’ before they could be unscrewed.

Chopping off the front end was even harder than the last part. To stiffen the trailer additional box section had been welded underneath meaning even more cutting, swearing etc. I would hate to have to work as hard as this every day! At last the final cut was made and the main channel gave way under pressure, reducing the whole trailer to three roughly similar sized chunks.

I’m glad that job was finally carried out, it had been talked about for a few years now but somehow I never got around to doing it. There was no sentimentality attached to the trailer, I hardly ever used it. No memories of successful days or bitter disappointments were attached to its rusting hulk. It was just a sad looking old fossil of a trailer, like hundreds of others lying abandoned in backyards or on the shores of loughs across land. I am glad it is gone now, one less piece of clutter in my life.