16th of March. A Monday, blessed with an overcast sky and light winds from the North East. By 11.30am I have cleared the desk and can hit the river for a few hours. A west wind would be better but beggars can’t be choosers at this time of the year so any day that is not frosty or stormy can be considered a fishing day. I make my excuses and check the gear is all in the car. Then it’s on the the N84 and the short trip to the River Robe.

The wet fly accounted for a nice wee trout in the first pool I fished and a couple of others splashed at the flies without holding on. A sprinkling of Large Dark Olives were hatching, always a welcome sight at this time of year. I fished down through the next pool and then the one blow that without further action despite the trickle of duns on the surface. Out of the lee of the bridge the temperature dropped as the wind cooled the air and I felt this was what was putting he fish off. I re-traced my steps and headed off upstream to find a warmer spot.

A trudge across a couple of fields brought me to a good pool which has given me big fish in the past. A few minutes watching for signs of life revealed some LDO’s and also a hatch of stoneflys. A small trout was rising steadily below me and another fish was taking flies off the surface some yards upstream. Time for a change.

On went a dry fly, a size 14 Olive Klinkhammer to be exact. I managed to fool the trout in front of me and he was carefully returned to the water after a brief fight. Great! My first trout on the dry fly this year. I worked my way up river looking for more rising fish but none were forthcoming. Searching the water with the dry fly produced nothing and after a promising start I was beginning to struggle. I had not fished this part of the river before and the going became harder as trees and fences barred my way. 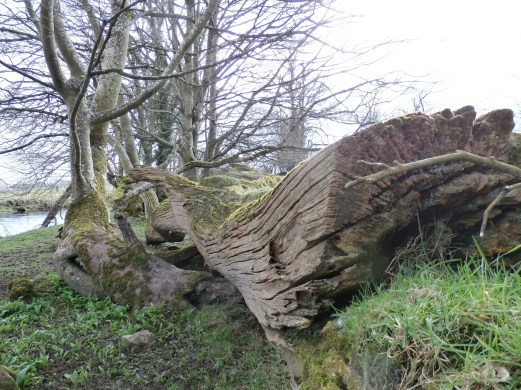 Perseverance brought me to a nice pool which I fished through with the dry fly without response. A change to a nymph was equally unsuccessful and since there was no sign of rising fish I wound in and pushed on upstream once more.

Time to change the setup again so I swapped back to the wet fly and a three fly cast of Olive Partridge, Plover and Hare’s Ear and a Beaded PT occupying the tail position.

By now the wind had swung East and it was cold. Fly life has ceased too, so things were not looking too optimistic for me. However, the team swung around perfectly in the current as I worked down the pool and eventually the line tightened as a perfect Brownie grabbed the PT.

The very next cast produced another trout to the Olive Partridge and one more fell to the charms of the Plover and Hare’s Ear right at where the water breaks at the tail of the pool.

Enough was enough and I plodded back to the car going over the days events in my head. The trout were keen to take but only in certain pools. Other spots failed to produce a single take. Maybe I had stuck with the dry fly too long today and I should have gone back to a team of sunk patterns sooner. Ah well, we are always wiser after the event.

The fields were well populated with new lambs and the daffodils are in full bloom now adding a splash of colour to cheer the heart. So ended a typical spring day’s trouting. No monsters but a few problems to solve and the old familiar tug on the line and a wink of bronze under the surface. Spring is here at last!

This post is in memory of Ally Skinner, a great fisherman who would have been 40 years old on this day. His loss at such an early age is keenly felt by all who knew him. Rest in Peace Ally. 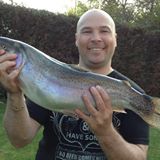