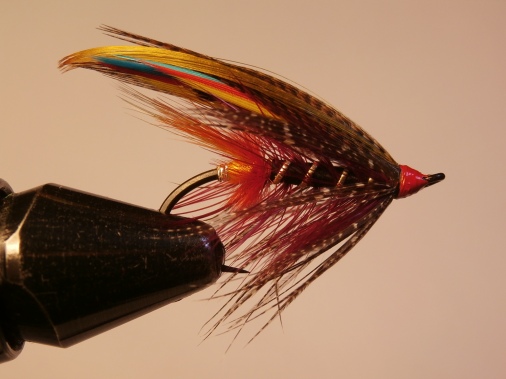 I think I would right in saying this is a fly which does not get used as much as it used to. More modern patterns has taken its place on the cast of most anglers and it is slowly but surely slipping into oblivion. This is a shame as the Black Doctor can still fool a fish on its day and I like to have one or two tucked away in the corner of my fly box for those times when I am unsure which dark pattern to try. Note that I like my Doctors with a claret body hackle instead of the more usual black one, I think the contrast between the black body and the claret hackle is important. I also retain the red butt, a detail which many commercially tied doctors seem to lack. I use dyed ostrich herl for the butt, accepting that the first fish will probably tear the butt asunder and render the fly beyond repair. Any fly which catches a springer has earned an early retirement and one which has been wounded in battle can still raise a smile when you come across it while poking about in your fly box during the long winter nights.

Look, there is a bit of tying involved when creating a Black Doctor but it is worth the effort in my opinion. A well tied Doctor nestled in the scissors of a large spring salmon is a thing of beauty and worth the cussin’ and swearin’ as you try to get those wings to sit just right. Make up a couple on biggish irons, 4 and 6 are good sizes, and stow them in the box for your next day out on the lough.

There are silver and blue doctors too, so maybe I will get around to adding them in a later post.