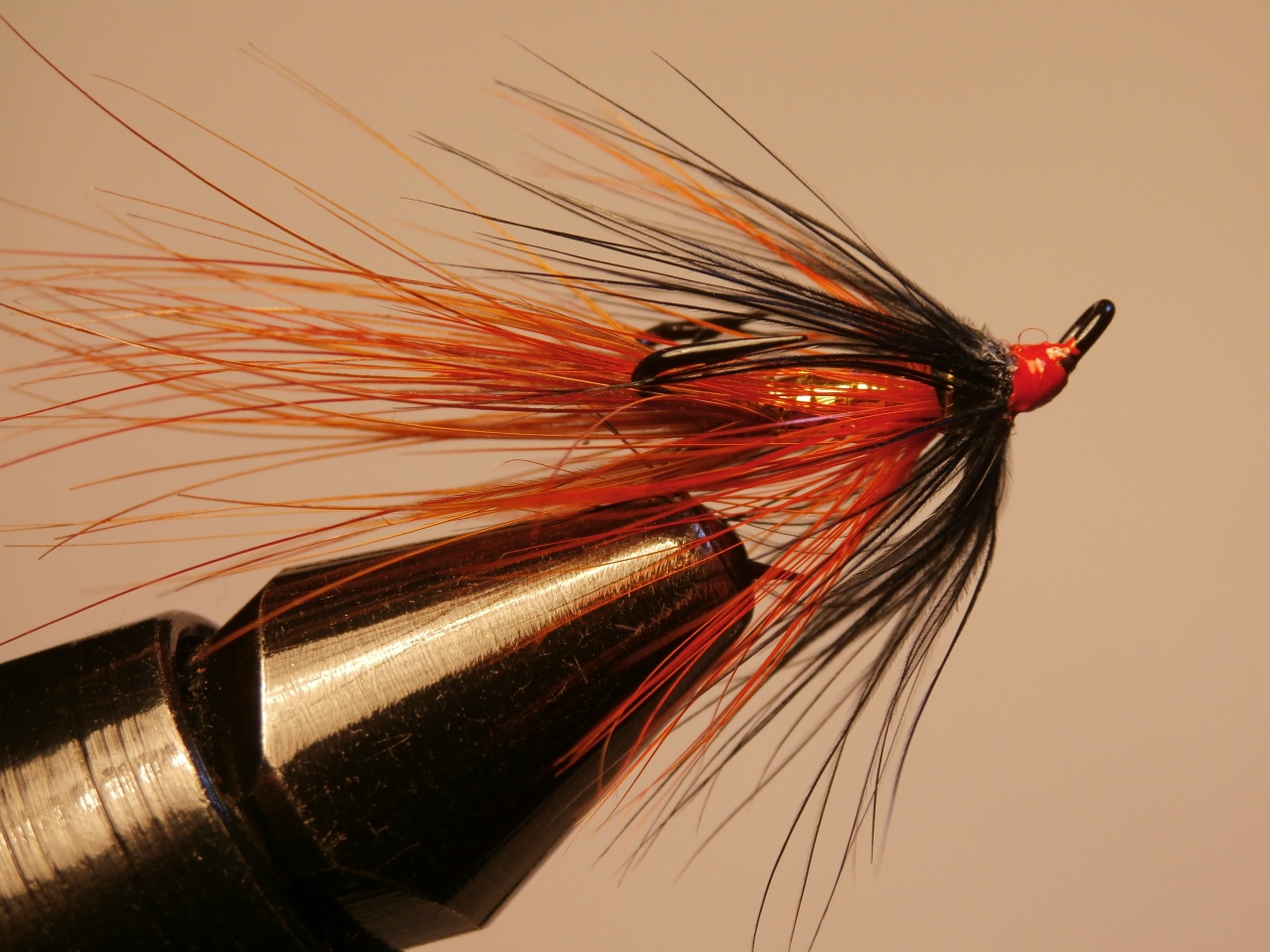 I tie hundreds of flies every year. I used to tie much, much more but these days a few hundred come off my vice and most of those are tied during the quiet winter period. Due to the nature of the fishing in the West of Ireland these flies fall readily into groups, trout: river dry, wet and nymph, lough trout dry and wet and finally salmon river and lough. I have never really thought too much about the distinction between the salmon flies I use in flowing water as opposed to the ones for the loughs but they are fundamentally different and here is my reasoning.

A large part of my reasoning for using differing lough vs river patterns is due to the movement of the flies in the water. On rivers there is a flow which acts on the hook and materials and causes the fly to move both in the current and within itself. Lough flies have a different role in that they will be moved largely by the angler drawing in the line and also in the ‘Z’ axis as the waves in the lough rise and fall. 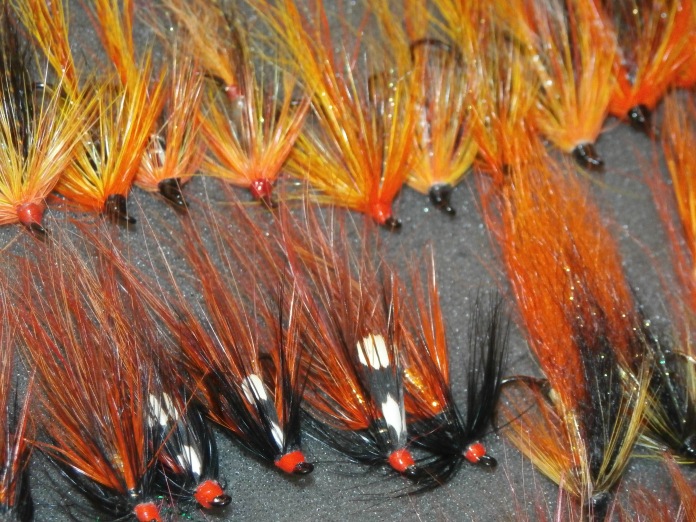 Perhaps the greatest difference is the hooks I use. On the river I still favour trebles and doubles with a small single occupying the dropper position on the leader. I like the weight of the trebles and doubles and the way they ’grip’ the water much better than singles which travel much higher in the water.

An Eany Tailfire tied on those lovely Loop doubles

I normally fish with two flies on the river and accept I may lose the occasional fish when the trailing/dangling free fly snags on a bush /tree/bottom (in practice I find this happens so rarely that it can be disregarded). I like to be able to offer the fish two different patterns on the same cast and will take a lot of convincing that this is more effective than the normal single fly approach. The only downside of fishing a dropper for me is the inevitable tangles suffered when casting into high winds.

Now picture the scene on a typical west coast spate river. Small, often deep pools, occasional long deep canal like stretches and short fast runs connecting these features. River width can vary from 3 to 30 yards and there will be lots of obstacles like trees and bushes. All in all, a world away from the beautifully tended, wide, smooth running ‘classic’ rivers of the Scottish East coast. As you can imagine, this has a big bearing on the flies I use here. 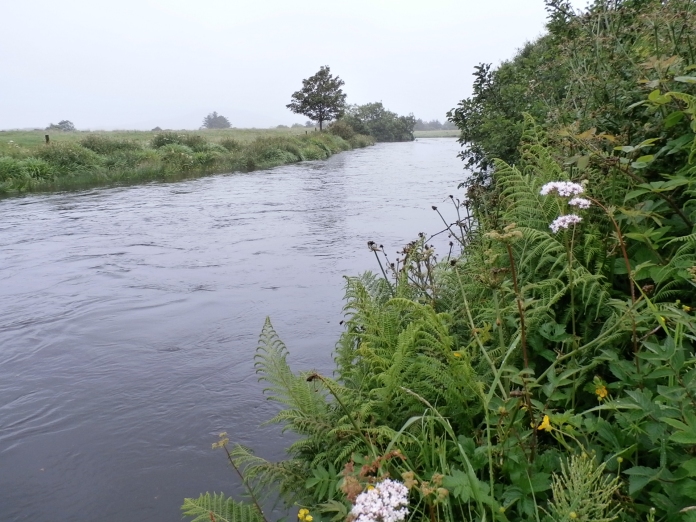 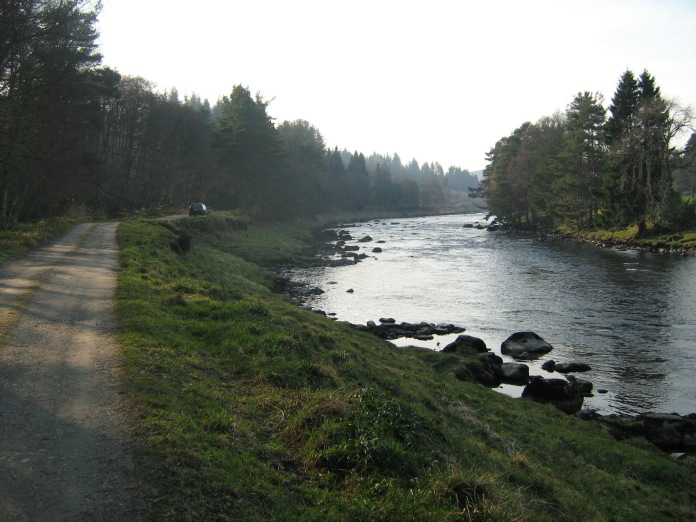 The Dee at Cairnton, a world away from my local spate rivers

There is very little in the way of spring salmon fishing here, so grilse are the target from May to September. Always on the move, these fish are often encountered is small groups and sport can be brisk when you bump into these pods of fish. Your flies need to be presented at a level in the water to attract their attention and the received wisdom is that needs to be in the top foot or so of the water column. There are minor tactics like skating flies but generally speaking you present the flies sub-surface. This is why I prefer my river patterns dressed on trebles and doubles. These flies sink immediately they hit the water, unlike single hooked patterns which have a nasty tendency to skate on the surface due to their much lighter weight. I have experimented with weighted flies and even adding weight to the leader but met with poor success so far.

Sinking lines or sink tips are useful to a degree and I admit a fondness for homemade sink-tips. My argument against them is based on that critical first few second after the flies hit the water when I need them to sink instantly instead of waiting for them to be dragged under by the line. On narrow, heavily overgrown spate rivers fish are often found lying hard against the bank, so casts need to be accurate and the fly simply must sink immediately it hits the water. I have experimented with small brass tubes in the past and found them to be pretty useful but I still prefer trebles or doubles for this work.

So my preferred set up on spate rivers when fishing for salmon is a small treble on the point, usually a size 10 down to a 14 with a small single hooked pattern on the dropper. Dropper length is roughly 4 to 6 inches. I will talk about patterns in another post. 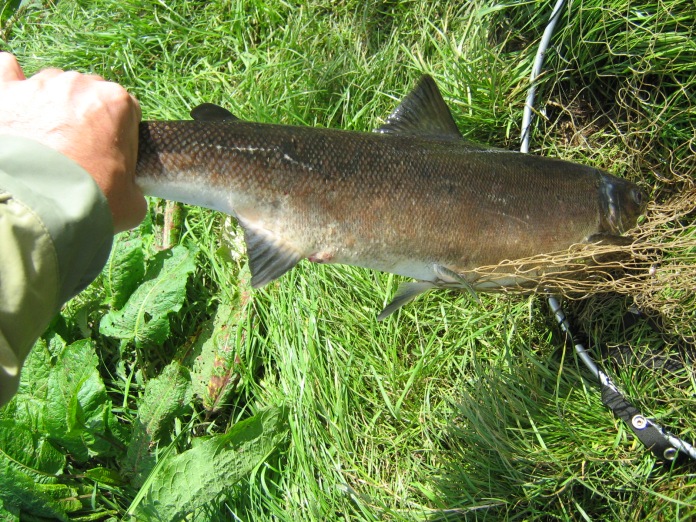 A small,coloured grilse from a spate river about to go back