I was due to be fishing Carrowmore today but that got cancelled as this is the first day of lockdown here in Ireland. We all have to stay at home and only venture out for the bare necessities of life. The new rules are in force at least for the next two weeks and it seems highly likely they will stretch beyond that. One of the new rules is you are not allowed to be more than 2km from your home when exercising so that rules out all fishing for me.

Wakening this morning I decided to sort through my baits which have been scattered across a number of different boxes and bags for ages now. It took me a while but I finally sorted them out into some kind of order and I now have a box for trolling, one for the river Moy and a couple of boxes of spares. I thought I might have some ‘gaps’ that needed filled but to be honest I don’t need to buy another spoon or plug for the rest of my natural life.

For the next two weeks I’ll post a different fly pattern each day here on the blog. It will give me something constructive to do and hopefully the patterns will be of interest to you guys and gals. Let’s start off today with a twist on an old favourite, the Thunder and Lightening.

Here is one tied on a slightly larger size 12

This is a salmon fly which hails from the hayday of scottish fly fishing. It still catches its fair share of salmon each season but I like to use it for trout on small lochs. Now here is the twist – I tie it on very small hooks, usually size 14s. Over the years I have caught a lot of small loch trout on this fly, usually fishing it on the tail of a three fly cast.

I use a heavy wet fly hook for this one, something like a Kamasan B175. Tying silk is black 8/0. Start the silk at the eye of the hook and catch in a cock hackle dyed hot orange. No need to go mad here with highest quality genetic hackles, Indian or Chinese hackles will do just fine. Run the silk to the bend of the hook catching in a golden pheasant topping for the tail, some fine oval gold tinsel which will be used for the rib and a length of black floss silk. 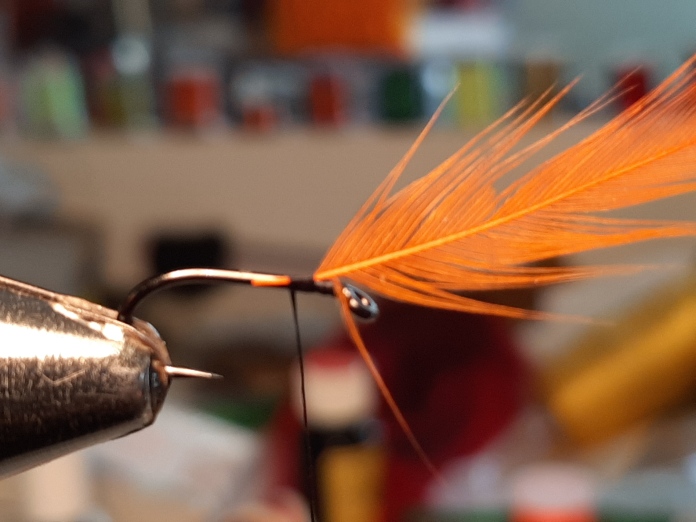 silk started and the hackle tied in

Take the tying silk back up to where the hackle is tied in then form a neat body with touching turns of black floss. Tie down the floss and remove the waste end. Form the body hackle by winding the orange feather in open turns down to the tail where it is tied in with the oval gold tinsel. Make 5 open turns in the opposite direction to the hackle, binding the hackle down as you go.

Body hackle tied in, now its time for the beard hackle

There is a small beard hackle composed of a few fibres of blue jay or guinea fowl dyed blue. I reverse the hook in the vice for this, offering up the blue fibres under the eye of the hook and whipping them in place with the tying silk. Remove the waste ends of the bread hackle and return the hook to the normal position.

Wings are made from matching left and right slips of bronze mallard. I know some tyers find these feathers torture to work with but I am afraid it is all a matter of practice. Tie in the wings and remove the waste ends. Now for the really tricky bit, the cheeks. These are made from the tiniest jungle cock feathers, the ones and the very end of the cape. Strip the fluff from the ends of each feather and tie them close to the wing, making sure they are the same size and length. Once you have calmed down doing the cheeks make a neat head, whip finish and varnish as normal.

This is a super wee fly and well worth the effort it takes to get the wings and cheeks just right. The small ones are great for loch trouting and bigger sizes suit the salmon.

Look after yourselves out there, I’ll post another fly pattern tomorrow. 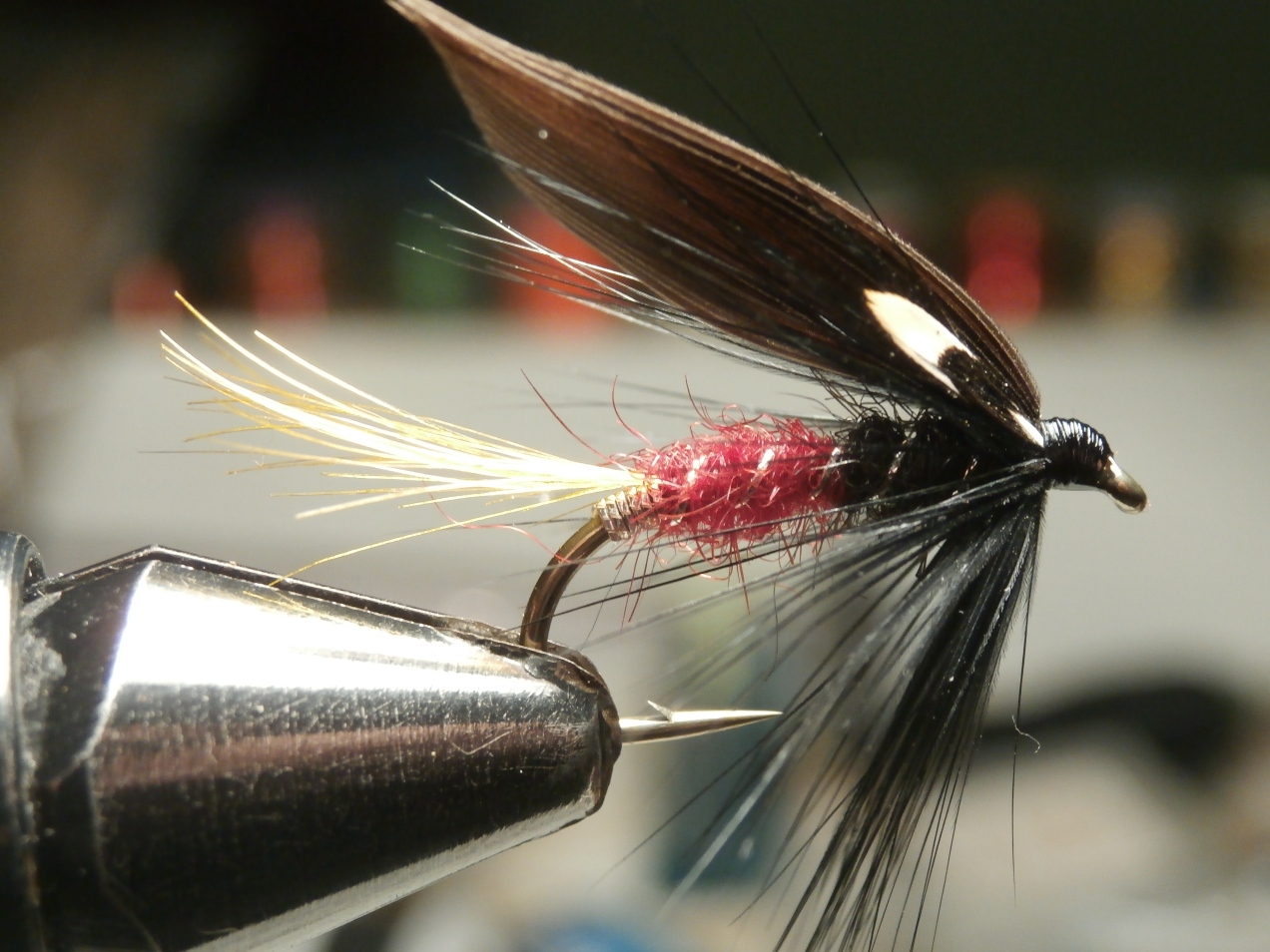 A few small spaces remain to be filled in the fly boxes and I made a couple of big Waton’s fancy this afternoon and the heavy mist turned the garden a silvery mossy colour outside the window.

The Watson is not a fly I have caught a huge number of fish on but I find it seems to be attractive to larger trout. I used to fish them tied on size 12 or 14 hooks early in the season for brownies but these days I prefer them in much bigger sizes for sea trout and even salmon. I’m thinking here of dark days after a summer spate, high water and grilse running hard. A Watson on the tail and something brighter on the dropper above it have been a winning combination for me over the years. For this job I like to use a size 6 or 8 hook.

This is an easy fly to tie once you have mastered wet fly wings. In smaller sizes the Jungle Cock cheeks can be a bit fiddly but apart from that this is a good pattern for beginners to cut their teeth on.

Only a few small gaps to fill now and I’ll be ready for the new season.

Fly fishing is a strange sport when you think about it. We deliberately set out to make the process of catching fish as difficult as possible so we get the maximum pleasure when we actually hook something in the face of the overwhelming odds we have placed upon ourselves. I am sure we all agree that the occasional red letter day is welcome, but if we hauled out bags of fish every time we went fishing, or if every trout/salmon we hooked stayed on the line and never came off at the net we would rapidly take up another sport. Imagine soccer if the goals were 30 yards wide and 20 feet tall, no one would go to watch a game if it was too easy to score. We humans are an odd bunch.

Taking the soccer analogy further, we anglers also delight in dropping our star centre forwards, ie our flies, in a very cavalier manner. Each season some new ‘wonder fly’ using synthetics which were probably invented for astronaut’s jock straps, appears on the scene and last season’s prodigies are relegated to the spare fly box or unloaded on ebay. When I was knee high to a grasshopper the killing fly was the Grey Monkey. Nowadays this great pattern is almost forgotten, which is a shame as it still fools trout. So let’s take a look at this venerable old campaigner and try to give it a new lease of life.

My introduction to the Grey Monkey took place in Somer’s tackle shop in Aberdeen. Not the fine establishment in the west end that is doing such great business these days. No, this was in the old shop at the end of Thistle Street, run by Jim Somer (may he rest in peace) and his side-kick Horace. I was in my mid-teens and as keen as mustard to improve my fishing. My fly tying was pretty good and Jim asked me if I would tie some flies for the shop, an opportunity I grabbed with both sweaty paws. Soon I was making Greenwell’s, Dunkelds and the like, mainly on size 16 double hooks for use on the local sea trout. Jim would give me the materials and tell me the patterns required. One day, not long after I had started this ‘job’, Jim gave me some rather odd materials and explained he needed some Grey Monkeys. What the hell were they!

Somers Fishing Tackle shop on Bon Accord Street in Aberdeen

It turned out that the Grey Monkey was THE pattern that season and they were disappearing from the shop as fast as Jim could buy them in. It is an easy fly to tie with one exception, the Jungle Cock cheeks on each side of the wings. Back in those days though Jungle Cock was impossible to come by, so I was tasked with making them without cheeks. A few days later I dropped in the couple of dozen Monkeys and received a repeat order. So it continued for the next 3 or 4 seasons as the GM seemed to be the only fly Aberdeen anglers wanted to use. I confess to being heartily sick of tying those damn Monkeys.

The odd name is derived from the material used to make the body. Apparently the original dressing asked for fur from a grey monkey to be dubbed on to the silk but this, quite rightly, is unobtainable so some substitute fur dyed light grey does the job in these more enlightened times.

The reason for bringing up this fly when I live and fish in Ireland now is that it works well here too when the Grey Boy buzzer is hatching. I mentioned earlier about omitting the cheeks but over here I regards the Jungle Cock as vital.

To construct the fly start by securing some yellow tying silk behind the eye of a number 10 or 12 hook. Prepare and tie in a grey cock hackle and continue to wrap the silk towards the bend, stopping opposite the barb.

The tails are made of a few fibres of teal breast feather and after catching them in cut and tie in a length of gold coloured floss silk. At the same time catch in a piece of oval silver tinsel.

Wind the tying silk towards the eye and stop at a point opposite the hook point and then wind the floss to make a tag; tie in and remove the waste end of floss.

Dub the grey fur thinly and wind up to just behind the eye, leaving sufficient space for the hackle, wings, cheeks and head. I don’t like a heavy body on this pattern, so don’t overdo the dubbing.

Run the oval tinsel up the body in open turns, tie in and snip of the waste end. Now wind the hackle, about 3 turns is sufficient. Prepare matching slips of blae coloured primaries and tie in wet fly style. I like Jay for this pattern as it is lighter than other wings such as moorhen or starling.

Now we come to the cheeks, a pair of matching Jungle cock are prepared and tied in by doubling the stems back to stop them pulling out. Trim the waste and form a neat head, then whip finish and varnish.

Fished in the traditional wet fly manner from a drifting boat and cast to rising fish this fly will work from April right through to the end of the season. I have toyed with the idea of tying some on bigger hooks than the 10 – 14’s I normally use and trying a size 8 during the mayfly hatch.

There is also a green version of the monkey, tied originally with fur from a green monkey no less. Now you can use dyed substitutes and green highlander shade seems to be the right colour. I have never used the Green Monkey but it should work during a hatch of olives you would imagine.