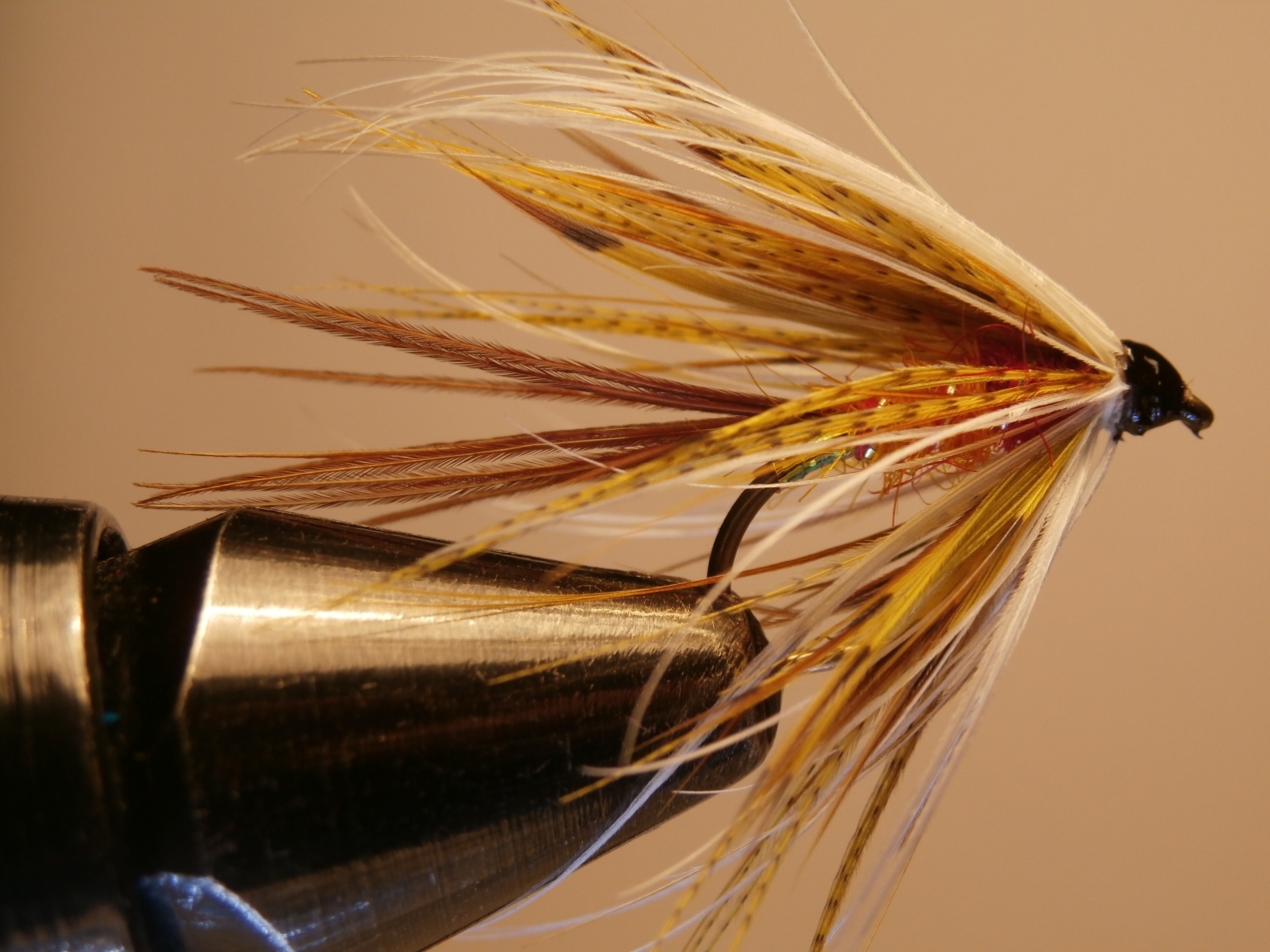 The rugged coast of Erris Head

The day we walked the Erris Loop provided me with a couple of new fly tying feathers. As we neared the end of our walk I spotted two snowy white breast feathers from a gull just lying there on the sheep nibbled grass. Picking them up I pondered the possibilities and the seeds of an idea for a mayfly pattern were sown in my imagination. The feathers were slipped into a jacket pocket for safe keeping.

The pair of white gull feathers

Adding a white hackle to the front of lough flies is not a new idea. The White Hackled Invicta has been around for years, a proven killer to some anglers and a waste of bloody time to others! The White Hackled Green Peter is way more reliable in my opinion, a great fly for both trout and salmon here in Ireland. I turn to the WHGP on dark, scoury days when I like to imagine the head hackle stands out in the inky black water. Both of these patterns feature white cock hackles but I thought that using the highly mobile gull feathers might be just as good (if not better).

The White Hackled Green Peter; a cracking fly. This particular specimen is sporting a pair of   pheasant tail legs.

What I had in mind for this new pattern was a fly to use on the top dropper in a big wave when the mayfly are hatching. I know that the last thing the angling world needs is yet another wet mayfly pattern but I get huge enjoyment out of just tying flies so even if this one is not an instant hit with the fish I’ll have some fun at the vice.

There is a bit of tying goes into making this one but the secret is to leave plenty of space at the head for winding all those hackles.

Tails: some cock pheasant tail fibres or moose main hair, either natural or you could dye them black

Ribs (2): a length of oval silver tinsel. This is closely followed by a piece of Glo-brite red floss (no. 4)

Body: In two halves. The tail half is dubbed golden olive seals fur. The front half is crimson seals fur.

Head hackle: white breast feather from a gull or tern 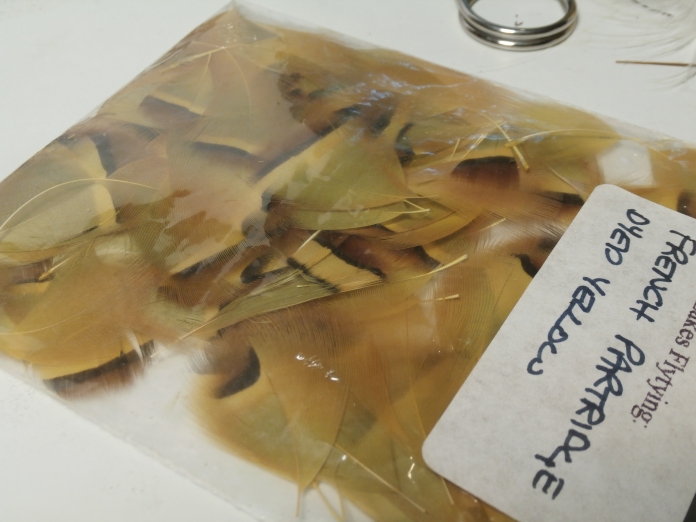 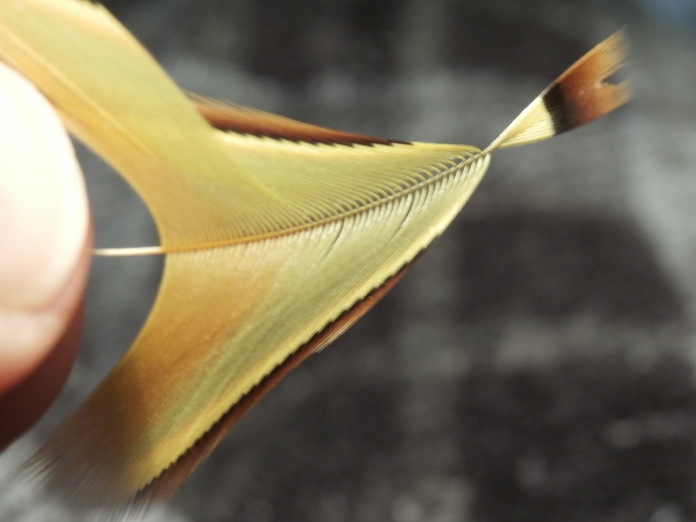 This is how the partridge feather should look before tying it in. 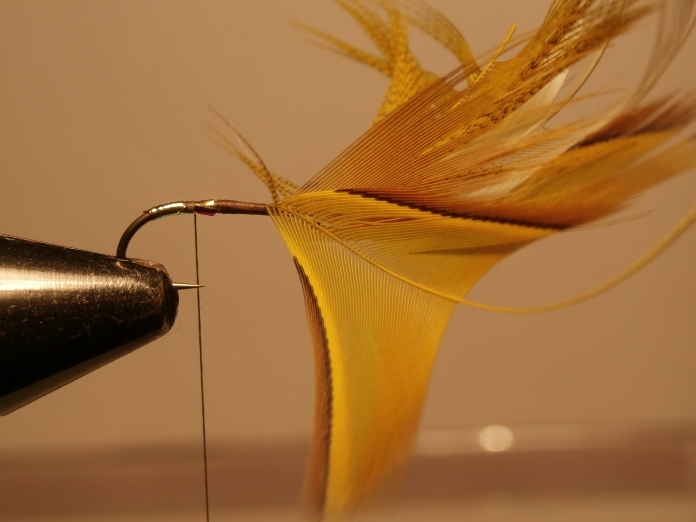 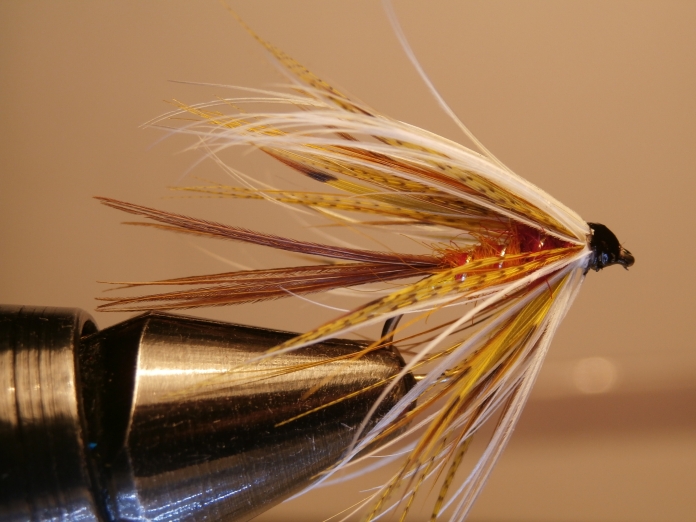 With nature running so late this season due to the cold spring I’m expecting the mayfly to start hatching in about two weeks time. I normally see the first ones on Cullin during the last week in April but the water temperature is still too low for the nymphs to make the hazardous journey to the surface.

This fly is very much intended for classic Irish wetfly fishing, ‘stroking the water’ with a team of three flies. I will fish it on the bob, trailing it through the waves to leave a wake which will attract the fish. That gentle rhyme of the waves, the warm, soft Irish air and the swish of the fly rods as you drift over shallow water is a balm to any fisher’s soul. I’ll curse at the fish who miss the fly and smile when the rod bends into a wild fish. Any day now……………………. 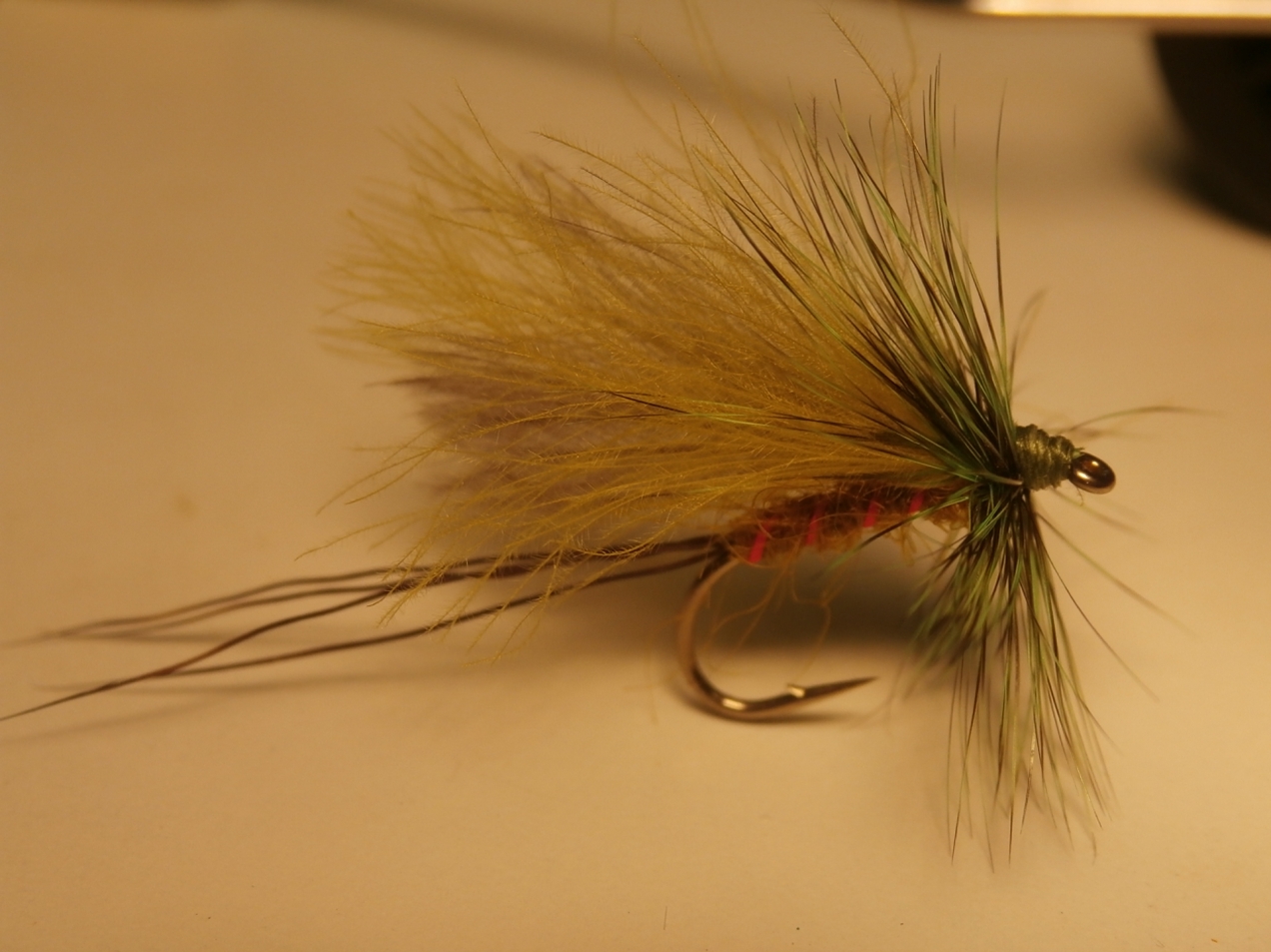 May came and went with unreasonable haste. I hardly wet a line during the merry month, a combination of work commitments and Mediterranean weather kept me occupied and the fish unmolested. Reports suggest the mayfly was late but is still hatching in good numbers as I write in the first week of June and as usual some trophy-sized trout are being landed on the big loughs.

So in keeping with the time of year here is a pattern for a dry/hatching mayfly imitation which I dreamt up a few seasons ago. It works well when the fish are mopping mays off the top and Lough Conn trout in particular seen to like this one. Tied on a size 10 hook, different colours can be used such as yellow, olive and green to meet the requirements on any given day. I will show you the yellow version here today.

Tying silk can be either olive or fl. yellow. If you use the yellow it creates a very bright fly so it pays to have some of both in the box.

Floss for the rib and fl. yellow tying silk

Run the silk down the hook to the bend where you tie in 3 or 4 fibres from a moose mane. I much prefer this material for making tails to the more traditional pheasant tail fibres because they last so much longer. Even up the ends of the moose hair before tying them in and aim to flair them out (a small ball of the body fur under the tail can help here). Now fix in a piece of rib which is globrite no. 4 floss. Dub a body of seals fur in the colour you desire. Leave plenty of space at the neck of the hook for tying in the wings and hackle. Wrap the floss forward in even spirals and tie it in at the head.

Now for the wings which are made of 4 CDC feathers. These are tied in over the back of the hook, almost in wet fly style. Tie in a matched pair of grey CDC with yellow or green CDC flanking them. I especially like the ‘dirty yellow’ CDC from Veniards. Take time to get these wings sitting just right, nice and straight.

The hackle should be good quality

The hackle is made from a good quality grizzle cock hackle dyed green or yellow. Tie it in and make at least 5 turns before tying it off and snipping off the waste. Form a head and whip finish. I make the hackle quite thick because this is a pattern which will be fished in a wave so it needs to be fairly robust.

The fly can be fished either well greased and riding high on the waves or ‘damp’ with just the CDC keeping the fly in the surface imitating a hatching insect. I use it on the loughs but there is no reason why it wouldn’t work on the rivers during a hatch. I like to fish this one on a cast with a spent gnat imitation in the evening. Sometimes the trout will prefer one fly over the other but often both will take fish in equal proportions.