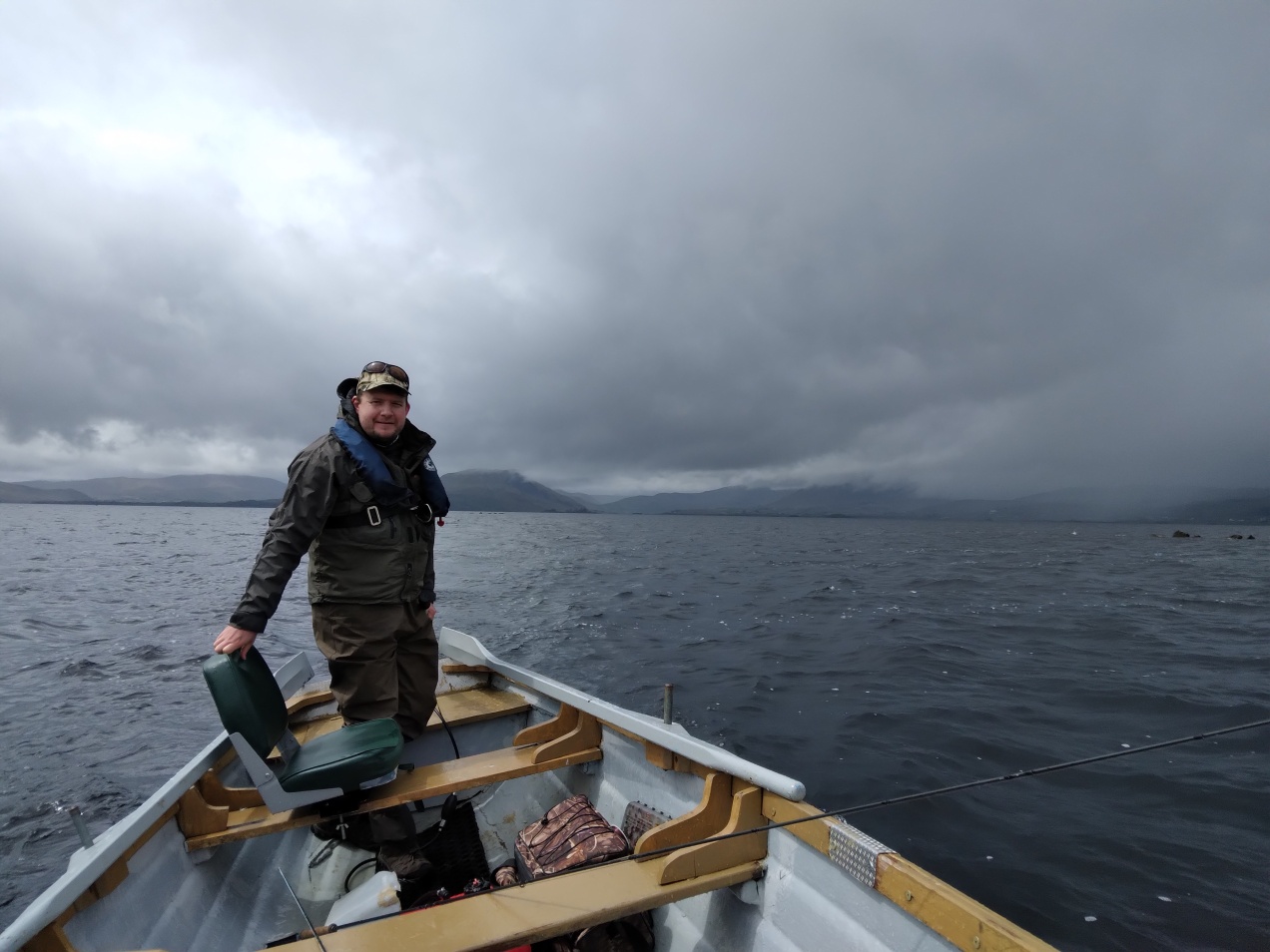 This trip had been planned for a while but had to be put off for various reasons. Mike works at the plant in Westport where I had been on contract and we talked often about our fishing exploits, eventually agreeing we would fish Lough mask one day. After numerous false starts we finally made it out on the water yesterday.

Mike keeps his boat on the western shore of the lough and we arrived there just around 10.30 this morning. The weather forecast was for light winds and we were concerned we would be greeted with a flat calm, but no, there was a nice wave and a wind from the south-west as we tackled up. Both setting up on wet flys, we headed off for the Schintellas where Mike had been very successfull a couple of weeks ago. Since then though the water level has dropped and it seemd like the fish which had been there in numbers had moved out now.

On the first drift Mike saw a fish rise and casting to it, he set the hook in a small trout but it quickly fell off. A promising start, but 3 or 4 drifts went by we had not seen any other fish let alone hook anything. Low cloud and rain squalls did little to encourage us so we pulled into an island for a reviving cuppa and to figure out a new strategy. The lack of fly life was my biggest concern and we felt we should move to try and locate a hatch. Mike had heard reports from other fishers that the mayfly were up but the hatches were very localised. With no signs of life here we would need to go looking elsewhere. Back in the boat we headed east and then south to the well known waters off the mouth of the canal.

For those unfamiliar with Lough Mask let me explain a little about this area of the lake. During the mid-nineteenth century a plan was hatched to link Lough Mask to the sea via a canal to join it to Lough Corrib. The two loughs are separated by a thin strip of land so this did not look to be too big a problem. Unfortunately the engineers had not bargained for the porous nature of the limestone rocks around here and while they dug out a channel in the normal fashion they simply could not keep the water in it. Fractures and chasms in the rock allowed the water in the canal to drain out and no matter how often the engineers tried to staunch the flow their efforts were all unsuccessful. The canal was abandoned and left alone except for the fish which used it for a breeding area. Where the disused canal joins lough Mask is known as the mouth of the canal and it is a very popular fishing area with a reputation for holding big trout.

We set up on a drift and I soon turned a fish which stayed on only for a few seconds before shaking the fly free. The wind dropped and we set up on the next drift, a tad closer to the canal mouth. Mike had by now switched on to dry fly as the conditions were ideal. There were even a few mayfly hatching out so we both felt much more confident. I managed to put a knot in my leader and as I was sorting it out I looked at my middle dropper and thought it was not right for today (it was a red-tailed Invicta). My Golden Olive Bumble variant might be a better option, so I ferreted about in the fly box and found one on a size 10 hook.

I had only made about 20 casts when the line tightened and I was into a fish which fought really well before sliding into the net. A fine fish of a pound and three-quarters with wonderful markings was my prize. It had taken the newly added bumble. It was great to land a fish but even more satisfying that it took the newly tied on fly.

We drifted on, both fishing hard now on the back of the success. Once again my line tightened and a good trout took to the air, ran to the right, turned around and shot off to my left, leaped again and finally threw the hook. Who could grudge such a doughty fighter his freedom? The brief encounter was huge fun and I felt no sense of loss at the fishes escape. On down the shore we drifted and yet another fish took me. The rod bent hard over as he powered off on a run but this one stayed deep, trying to snag the line on the jumble of limestone boulders on the bottom. Safely in the boat he turned the scales at two pounds and was the most glorious bronze hue. In the space of 20 minutes I had hooked three good trout and boated two of them. Lough Mask was being very kind today.

Pulling in to the shore, Mike changed back to the wet fly and I gave him one of my bumbles to tie on. A quick cup of tea then we were back out again. Pretty soon Mike had a trout slash at the dropper but it failed to connect. Lifting off, he cast again and this time was rewarded with a firm take to the tail fly, a black dabbler. Played out, he slid the fish into the meshes and we both admired the third trout of the day. We fished hard on various drifts in the bay but the fish had gone quiet so we moved out to try new water.

The rest of the day was fishless but drifted over some fantastic reefs and were expecting a take on every cast. The noticable difference between the mouth of the canal and the other areas we covered was the fly life. It was almost totally absent on the other drifts but we found a few mays, lots of caddis, some lake olives, alders and midges near the canal. Even though we are in the middle of May the mayfly hatch has barely started. The recent cold weather must have played a part in this and we need to hope for rising temperatures before the end of the month.

About 6pm we decided to call it a day after fishing around the islands on our way back to base. The wind had been very good to us all day, falling away sometimes but always picking up again to keep a small wave on the surface.

OK, so three trout landed for a day out on Lough Mask is hardly scintillating fishing but we both enjoyed the day. Just to be out on the lake after lockdown is a great feeling. A large number of boats were out today, many I am sure having traveled from other counties now the restrictions have been lifted. I suppose some boats did very well today while others blanked but in the grand scheme of things I think we can be happy with three good trout for our efforts. The mayfly are starting to hatch but numbers where we were fishing are still low. If the weather is good we should see an increase in activity over the next two weeks.

We pulled into the shore at the end of the day just as the wind dropped away, leaving the face of the lough serene and peaceful. Gear was unloaded and lugged back to the car, rods dismantled and waterproof garments removed. The boat secured, we drove off and headed home, talking about the day as we went. The car was full of our gear, engine, fuel tank, bags, rods, nets and the rest. We marveled at the sheer quantity of accouterments required to catch three small fish but that is our chosen sport and we love it. Days like yesterday when the weather is kind and we catch a few fish in glorious surroundings are the stuff of dreams. It was our first time sharing a boat but I hope we can do so again in the future. Mike is a skillful and persistent angler and it was a pleasure to share the day with him.

I did not fish last week as we had a death in the family. Sadly Helen’s mam, Patricia, passed away at the age of 81 years. She will be sadly missed. A larger than life character, she was a kind and caring woman who battled great difficulties all her life. Rest in peace Pat.

4 thoughts on “Mouth of the canal”