Wulff patterns are widely used here in Ireland during the mayfly hatch. Normally tied on size 10 hooks, a huge range of patterns sporting the signature split hair wings catch trout during the greendrake hatch and the falls of spinners every season. There can’t be many Irish lough anglers who don’t have a few Wulff flies in their box. Outside of mayfly season though they are virtually never used. I kinda buck that trend though!

Lake olives are large upwinged flies which hatch out from April right through the season. The biggest hatches are in the spring with smaller and less well defined hatches occurring throughout the summer and early autumn. The naturals vary in shade so one day on a certain lough you can find quite yellowish coloured duns and the next day they can be quite dark. I believe this is part of the problem that anglers have when dealing with hatches of olives here on the big loughs. Many anglers really struggle despite good numbers of fly on the wing and fish taking them confidently. I vary the colour of my flies until I find the one which will work on any given day. For that reason I tie this Olive Wulff in a wide range of body and hackle colours.

Lake olives are quite large flies and I tie the Olive Wulff on a size 12 hook to imitate the duns as the drift on the surface drying their wings. I like the Kamasan B170 hook for this pattern but feel free to use the hook of your choice. Olive or brown tying silk works best for this fly. I don’t mention wax very often but you need to thoroughly wax the tying silk when making this pattern. Squirrel hair, which is used for the wings and tail, is very slippery stuff so waxed silk is needed to keep everything in place and stop it sliding about.

Start the tying silk at the bend of hook and run it up the shank to the eye then come back about a third of the hook length. You need to leave yourself plenty of space to work on the wings and hackle. Take a bunch of squirrel tail hair from a tail which has been dyed olive and use a hair stacker to even up the tips. Don’t use too much hair, I find that slim wings are better than heavy ones.

With the tips of the hair facing forward over the eye of the hook use the pinch and loop method of tying in the hair and then make a number of turns with the silk to firmly secure the hair on the top of the hook. Divide the bunch of hair in two with figure of eight turns and build up the silk in front of the wings to make them sit upright. Keeping a good tension on the silk at all times during this process is vital. It all seems very difficult the first time you tie a Wulff but with practice it becomes much easier. Remember to think about proportions – the wings should be the same length as the hook shank and so should the tail.

With the wings completed you then remove the waste ends of hair but do this in steps so you get a tapered body. Start to run the tying silk down towards the bend and tie in another slim bunch of olive squirrel hair which has been even up just as you did with the wings in the stacker. Remove the waste hair and catch in a length of fine gold wire then run the silk to a point opposite the barb of the hook. 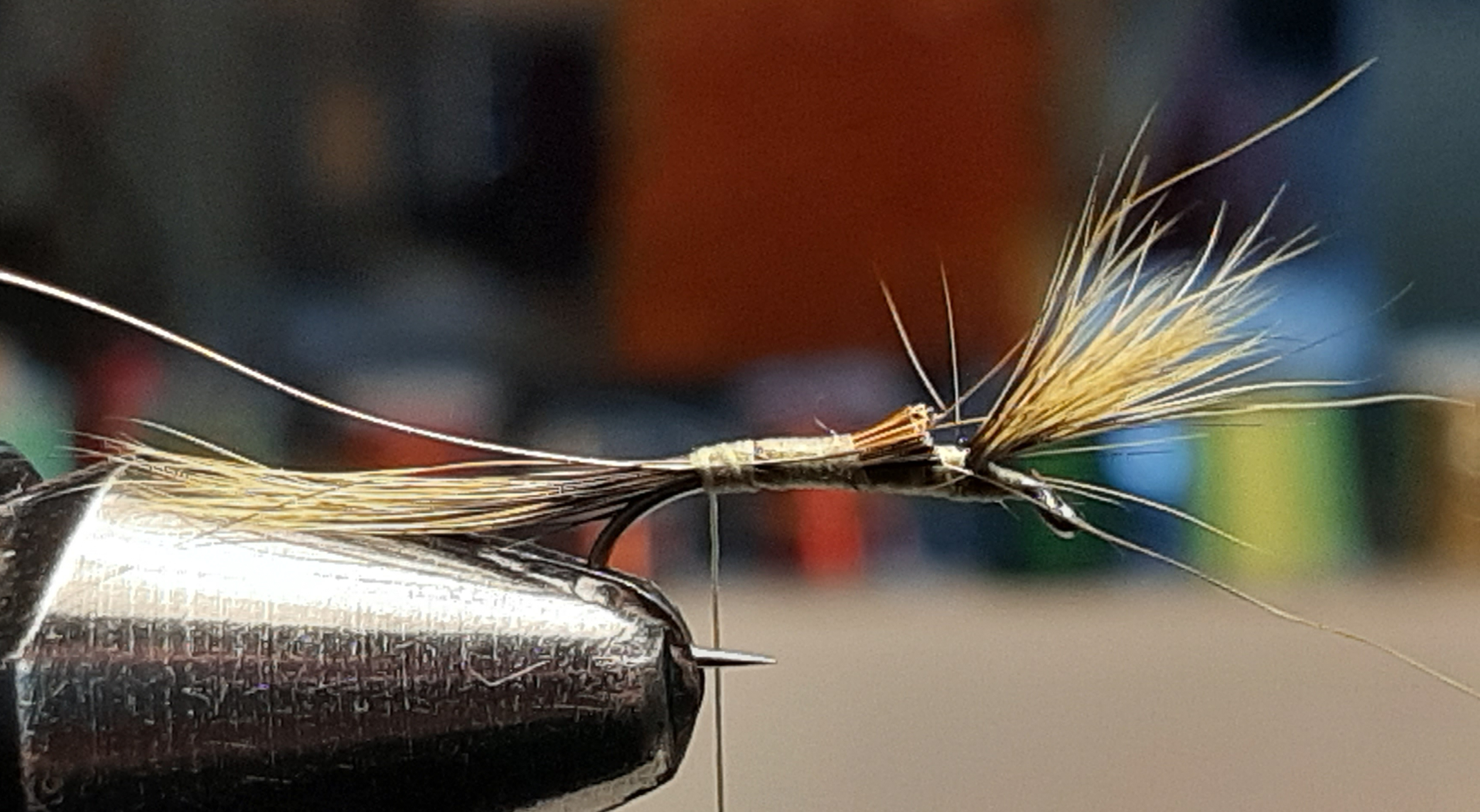 Dub the silk with some olive seal’s fur and wind this back up the hook to form the body. Wind the gold wire up the body in open turns, tie in and remove the waste end.

For the hackle you can use either a plain olive cock or a grizzle cock dyed olive. Prepare the hackle in the normal way and tie it in just behind the wings. Make three or four turns of the hackle behind the wings and the same again in front before tying down and trimming the waste off. The head and whip finish are as normal and add some varnish to seal the head after the tying silk has been cut off. 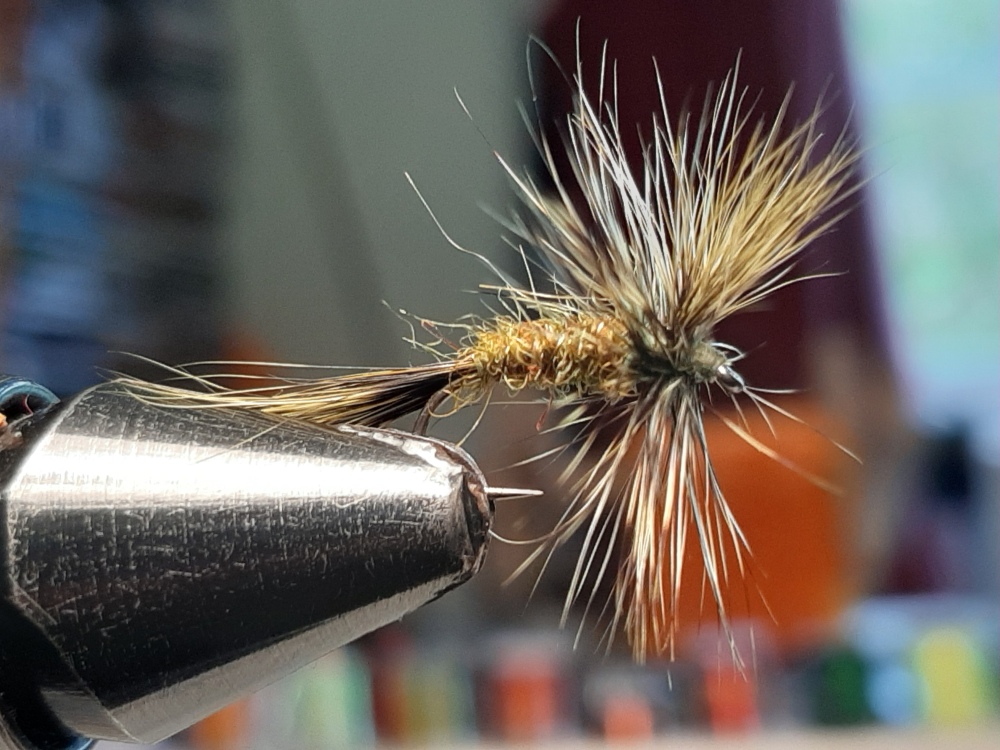 Tie this basic pattern in a range of shades of olive , everything from pale to sooty. It will catch fish during the mayfly hatch too. I can’t decide if the trout take it then as a mayfly or are they picking out olives which often hatch at the same time. Have fun making these Wulff’s, there is great pleasure to be had making something as complex as these flies.

Look after yourselves out there!