I’m healing. Slowly and painfully, but I am recovering. My balance is poor and I stumble like a ten o’clock drunk sometimes, fearful of falling. Mornings are the worst. It is so hard to keep level until the meds kick in and my internal gyroscopes eventually begin to operate fitfully. My days are punctuated by periods of bewilderment at this turn of events and a sense of loss. Life has changed and not for the better. With no reason for the sudden onset of my vertigo the medical profession have told me ‘this will take time to pass’. How much time? Will I ever get back to normality? No answers, just shrugs of white coated shoulders……………..

Our holiday, touring around Europe by train was a welcome distraction but marred by people’s well meaning efforts to help the old guy who could’t walk properly. ‘Over here, sir, let us help you’. ‘Are you travelling alone?’ Here, have this seat’. I felt sick to my core at the helplessness. I’m too young to be a cripple. I am healing, can’t they see that?

the square in Krakow

It’s the dying days of the season here in Ireland with most fisheries closing at the end of this month. My worst season ever is almost over, slithering to an ignominious conclusion. The drought of 2018 was bad. That long, hot summer completely dried up some rivers and devastated the stocks on others. Salmon were scarce across the country and trout rarely ventured to look up from their work hoovering the bottom of the loughs. It was a season to forget for every angler I know.

Conn, another poor season on this water too

We trolled diligently but failed to hook a single fish of note on the snaking Cashel River and we were not alone, we heard of nobody else having any success. The Cashel flows sedately through the flat lands between Ballyvary and the village of Park, home to shoals of fat Roach and Perch, numerous toothy Pike, a few large trout and our quarry the Atlantic Salmon. Only the roach thrived this summer and the solid, silvery salmon failed to appear at all.

A stretch of the Cashel river

The Cashel is about as far from your classic salmon river as it is possible to get. The wide, shallow runs interspersed with holding pools so beloved by generations of fishers on the Dee or Tweed are replaced by a narrow, deep channel which barely changes pace as it wends between the tussocks of bog grass. The channel was straightened and deepened by the OPW many years ago with the aim of reducing flooding. It could be argued this has been a success as the low lying flat lands drained and became fields where they had once been wild bog, full of birds and animals of all descriptions. Now they are sterile fields full of grass to feed cows and sheep. The land still floods sometimes but not as often as it used to, that water now runs off fast and causes flooding further downstream. The bird song stopped when the diggers turned off their diesels and clanked off on flatbeds to their next place of destruction. The salmon fishing has never recovered from this act of government sponsored thuggery and these days a small number of springers nose up the Cashel in high water followed by a trickle of grilse if there are any summer spates. From June onwards the river is pretty much unfishable due to dense weed growth caused by agricultural run off.

the hills of the Windy Gap in the distance, the Cashel meanders through the level lands into Lough Cullin

For all its unlovelyness this small river draws us back each year because in the past it was productive. We managed a few salmon each season and there were always those autumn days when we boated pike after pike. Not this year though. The salmon never did run the river and even the pesky pikes were absent. We tried it a few times on days when the conditions were good  and all our senses told us we should be contacting fish but the rods did not bend nor the reels screech. Shimmering spoons wobbled and weaved enticingly through the murky water but we would have been as well propping up a bar with pints of black porter to sup. We blanked again and again. 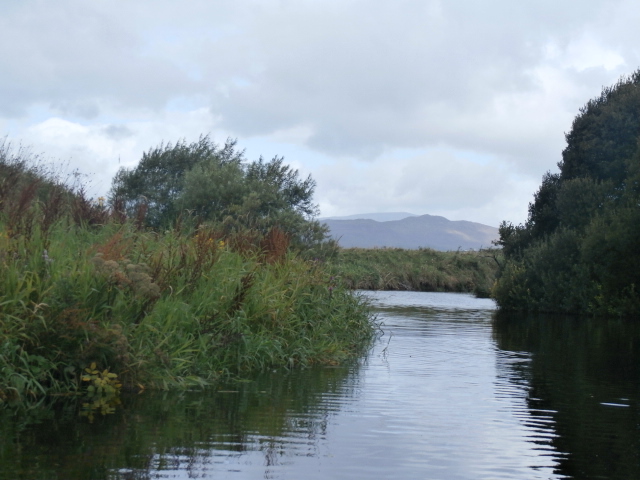 Not catching fish is the norm for us anglers. Hours slip past without anything much happening. We accept this because we anticipate the rare moments when a fish does bite. It’s that hope which is a vital but oft unspoken spur which keeps us fishing. Without hope we would not bother to fish. This season the flame of hope flickered and died on the banks of the Cashel amid the flat, silent fields. It feels like we have just done too much damage and there are not enough unfettered green spaces remaining.

Will we bother to fish the Cashel next season? At this stage we don’t think so. The hope which has been eroding since February doesn’t simply regenerate and the endless disappointments can’t be erased from the memory banks. Angling is all about hope and the belief that a fish will take your fly or bait at some point but that has been stretched to the limits of credulity this year on the Cashel river. Some late runners will swim up the river now the season is closing and the next spate will see them leap the falls at Carrowkeel as they head for the spawning redds. I doubt there are enough of them though to see the fortunes of this quirky fishery turned around.

Yesterday was a better day than the one before with only a couple of stumbles. A dizziness descended for maybe 20 minutes in the morning but it cleared it before anyone but me noticed. I am getting better!

Here is James McMurtry singing about another desolate flat landscape.