Not really about fishing at all, but I thought this tale of modern life was worth the telling……….

eBay is great, isn’t it! Any old tat turns up on it and if you are like me then simply trolling through the various categories is entertaining enough without even making a purchase. There are bargains galore and rip offs in equal quantity. While I have personally never made any large purchases on eBay, I do enjoy perusing it for old lures. Not your collectable stuff now (way too expensive for a poverty-stricken angler like me), just old fashioned work-a-day lures that I have used for all my angling life.

I have this theory which may or may not hold water. Old ABU lures are better at catching fish than the new ones (sorry ABU Garcia). The exact reasoning for my long and dearly held suspicions lacks any scientific basis, so this remains very firmly in the realm of theoretical hypothesis. The modern lures don’t feel right to me somehow. They appear to me to be manufactured from cheap alloys and their action in the water does not seem to me to be so energetic. I am not alone is this view and I know other anglers who share my ill-defined beliefs when it comes to comparing Scandinavian and far eastern metalwork. Of course, a happy hunting ground on the net for original Swedish ABU lures is eBay. That is where this modern day tale starts………

I was at it again you see. In a hotel room after work with time on my hands and a good internet connection. eBay beckoned and I started clicking through the fishing lures on offer. Rare! Vintage! Very Scarce!!! All the usual sales techniques were being fully deployed to ensnare the unwary. Toby’s which on closer inspection turned out to be Shanny’s (a copy made in the Far East for Woolworths), ‘Vintage’ devons at eye-watering prices which you can still buy new online for a few bob,  Rapalas with wonky diving vanes and a host of boxes containing varying amounts of angling rubbish. In amongst this piscatorial flotsam and jetsam there were some gems and I latched on to a box of old lures which were reasonably priced. A few clicks with the mouse and I was done. I would have forgotten about the old box I had bid on but eBay kindly sends you reminders to keep old duffers like me to keep me on the ball. To cut to the chase, I won the auction! 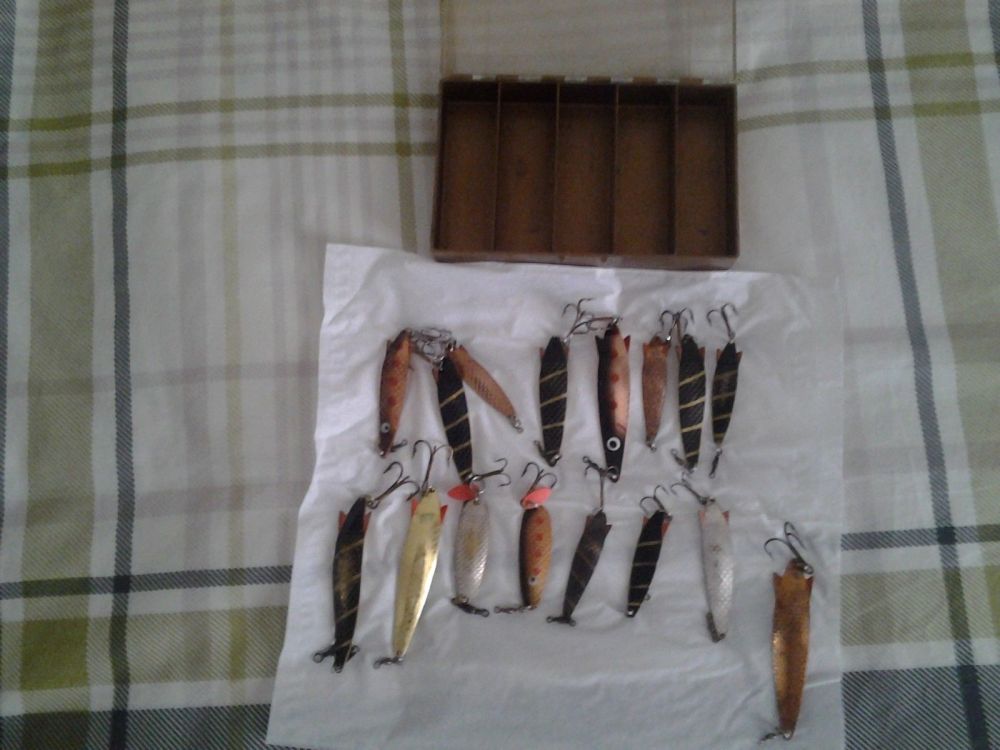 My prize consisted of a grand total of 16 old ABU spoons contained in a neat little bronze coloured plastic box with a clear lid and internal divisions. Most were Toby’s but there were also a couple of old ‘Salar’ spoons too. I must confess that I was pretty chuffed at acquiring this bargain, even if a couple of the spoons were ones I already had in my box. For whatever reason there is a glut of Zebra coloured Toby’s out there and I have enough of that pattern to last me several lifetimes. Then again, that grand old angler, George Gordon swore by an 18 gram Zebra Toby and did great execution with it back in the day on the Mugiemoss beat of the Don. Here is a photo of George with his best ever salmon, a whopping great 35 pounder! 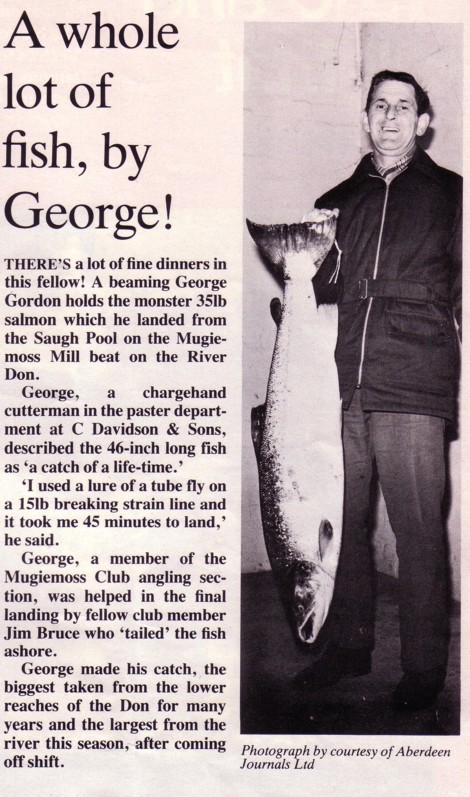 And here is where this everyday tale of modern shopping takes a funny turn. When paying for my newly purchased trove I noticed the name of the seller ‘denisthefish’ and his address – Aberdeen. A couple of emails soon established the truth, ‘denisthefish’ was none other than Sinky Sinclair! Long, long ago I used to work and fish with Denis ‘Sinky’ Sinclair. I left Aberdeen in my twenties, never to return and lost touch with most of my friends and workmates up there. Yet, after all these years here I was, back in touch with the bold Sinky. Denis, now in his seventies, still fishes the lower Don but he tells me the fishing is but a shadow of what it used to be. He only managed to catch two salmon last season on beats where we would have previously classed two fish in a day as a reasonable outing. 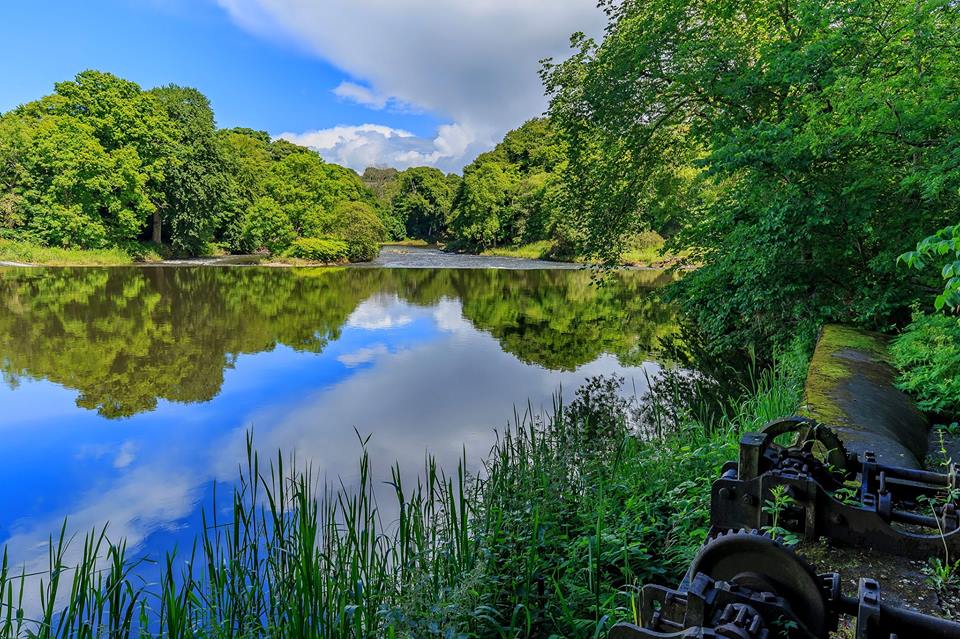 The lower beats of the river Don in Aberdeenshire have waxed and wained as salmon fisheries over the years. The waters of the Don were harnessed to provide power and process water for a large number of mills, leaving the river scarred and altered to meet the needs of the industrialists. The salmon dwindled in numbers to the point where the only way fish could survive was to run through the lower beats during high water. The river became little more than an open sewer for many years. Yet, somehow the fish kept returning to spawn and by the seventies new environmental legislation began to force the mills and utilities to add better waste treatment plants. Amazingly, the river healed itself, spates scoured the filth accumulated over centuries from the bottom. Weed growth returned and with it the invertebrate life to support trout and young salmon. Salmon numbers surged and the seventies saw some spectacular angling on the lower beats. As I worked in the papermills during that time I had access to a couple of beats which produced memorable days fishing. One of those beats was at the back of Donside, where Sinky and I searched the depths of the pools with minnows and spoons. The mills have gone now, replaced with smart new houses. All just a memory now.

The wee bronze coloured box and its contents duly arrived. I was delighted with them but even more pleased to have been in touch with Sinky again. It just shows how interconnected we in the western world are to each other. You can bet that when I tie on one of those spoons and drag it through the waters of Lough Conn this season my thoughts will drift back to those halcyon days when me and Sinky used to fish at the back of the mill. 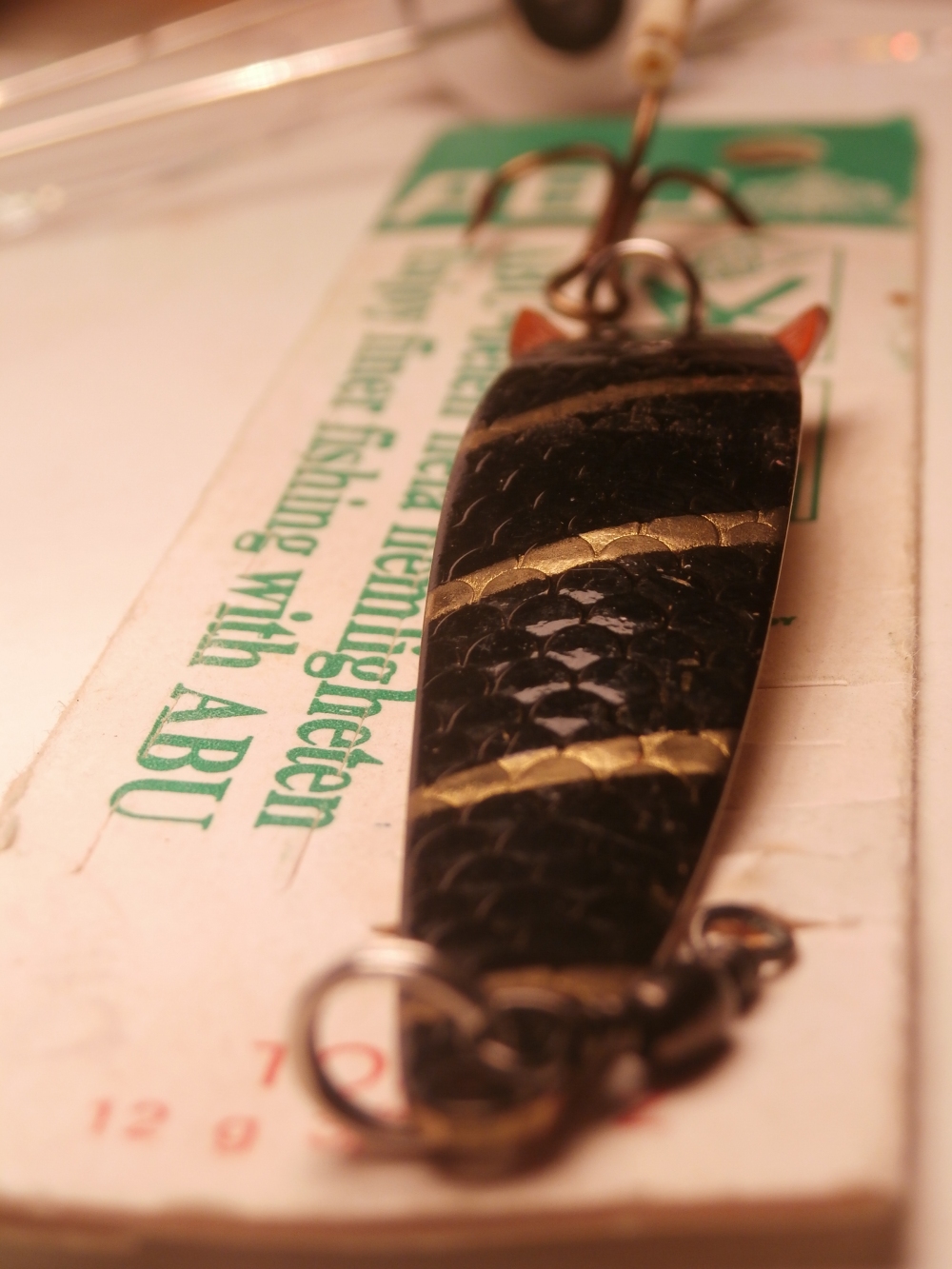 6 thoughts on “Toby, Sinky and the net”