Sunday saw me out with rod and line not once but twice in one day but I am still waiting for a good fish in my net.

Loose plans had been agreed for a short session on the Cashel River later on, leaving me time for an exploratory trip to the River Robe. I knew the stretch immediately below this bridge intimately but upstream of road was virgin territory as far as I was concerned. The map suggested some interesting bends but a large portion of the river was shrouded in trees. What delights were hidden from view?

I normally thoroughly enjoy my drive to the fishing. It has a completely different feel to the everyday commute, beyond what could reasonably be attributed to less stress. Just the act of driving the car in the direction of a river is part of the whole experience. Thoughts and ideas about the fishing are pondered as the car zips along the tarmac. I’m permeated by feelings of well-being and gratitude for my luck to be living in a free and safe country where I can fish whenever I want. For me the journey along these well-worn byways, rods in the back seat, are an integral part of the days’ fishing.

30 minutes after pulling out of the driveway I turned left on to a narrow road which had not seen a shot of tar for many a long day (council cutbacks no doubt). Bumping along, all the time scanning the road in front for pot holes, I wound round some bends and found a convenient parking place. This alone was a small victory; finding somewhere safe to leave the car can be difficult. Soft verges are the norm here-abouts so finding any hard ground roughly car sized and within walking distance of the water has to be a good start to the day. I tackled up and set off for the river a couple of fields distant.

The Mayo/Galway region is not blessed with the infrastructure of mass transportation. I guess my description of the pot-holed bumpy roads kinda gave the game away on that front. There are precisely 2 railways in Mayo, the one from Dublin which reaches out to Westport and a spur line off of that one which swings north and follows the Moy on up to Ballina. Train spotters would lead lonely and deeply disappointing lives this side of the Shannon. There used to be more tracks but these have all long since fallen into disuse, reminders of busier times. I hiked along the skeletal remains of one such track which led to an old bridge over the river. I had hoped there may be some fishable water above the bridge but it was choked with rushes and enclosed by steep banks. I clambered down the other side, squeezing through a small gap between a barbed wire fence and the ancient iron work and finding a stable bank a few feet above the water. 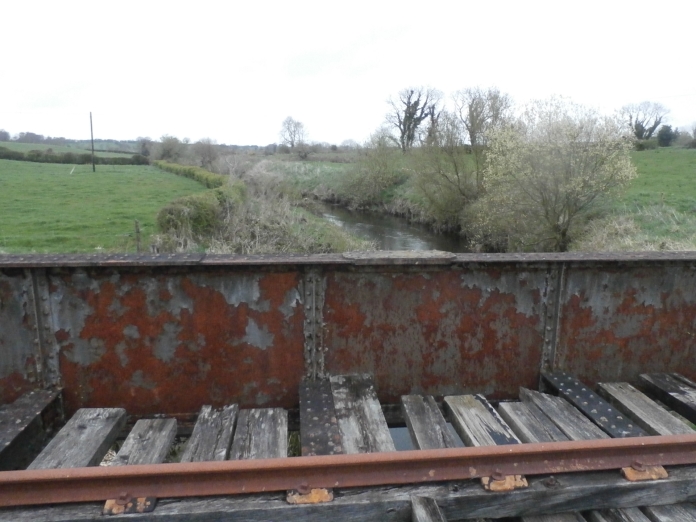 The river has dropped to near summer level over the last week but it is still quite coloured. I confess that I am puzzled by this browny-greyish hue to the water. The Robe is never in clear but there seems to be a change in water quality since last season and not a change for the better. Heavy nymphs were the order of the day and I worked my way through some likely looking water but to no avail. Trying to flick the flies under an overhanging branch to fish a likely looking pocket cost me a leader and pair of nymphs. Cast and flies replaced I skipped the next bit of dead looking water and emerged at a road bridge. Hopping the wall, I crossed a field and regained the river bank at a short, fast run which screamed Trout! Sure enough, a small lad grabbed the hare’s ear and another of similarly modest proportions fell off as I swung it to hand. It only took a few minutes to run through all the fishable water then it was off across another couple of fields, criss-crossed with the inevitable electric fences. 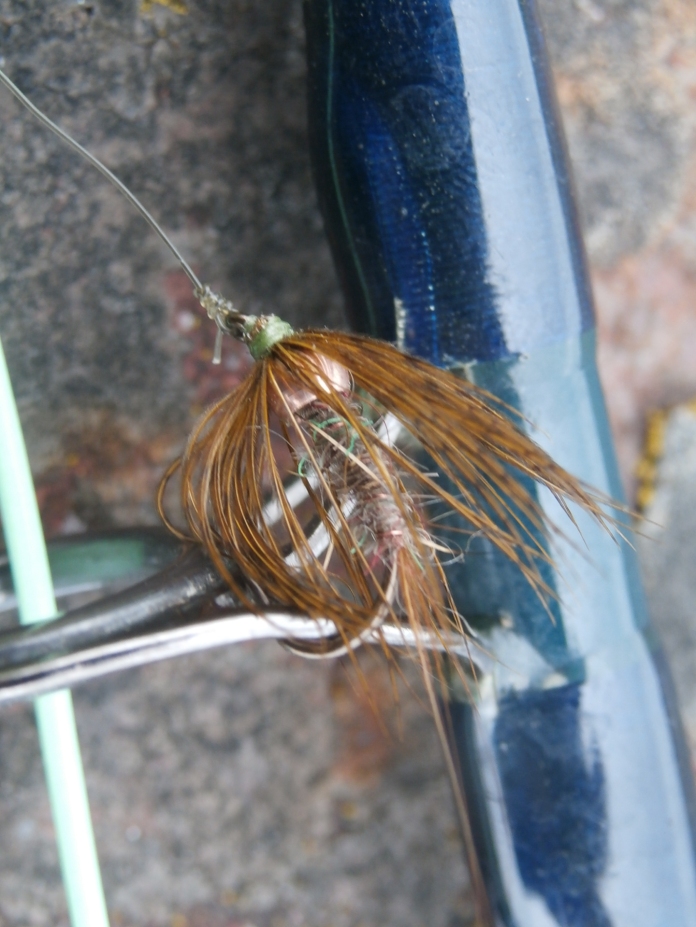 My next obstacle was a small wood. I knew that it was only a few hundred yards across but this was a very old stand of trees and they had not been tended, meaning the ground was littered with fallen boughs, tangles of brambles and hidden dips and troughs. I surveyed my surroundings and thought I could make out the remnants of a disused pathway same yards back from the river. Scrambling up a steep but mercifully short slope I found myself on a path which could have come straight out of a Tolkien book. The purpose or reasoning for this once fine path is lost in time but it was very welcome to this by now tired and sweaty angler. A few fallen willows and ash had to be hurdled but otherwise it was pretty good going. I emerged from this enchanted wood at the corner of a large field with the river flowing more purposely on my right. 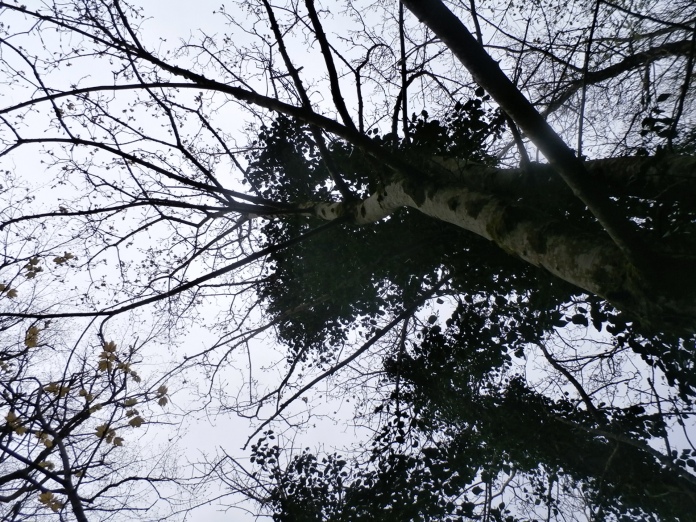 The nymphs swung enticingly near the bottom but only two small trout intercepted them. This was lovely water, a series of short pools with occasional trees and bushes to provide cover but not thick enough to cause me problems. Early April, good water and a hatch of flies – no hang on just a minute, that was the only thing missing (again). No fly life. No LDO. None of those stoneflies which the trout love so much. Not even midges. Nothing to tempt the fish to look up for a meal. 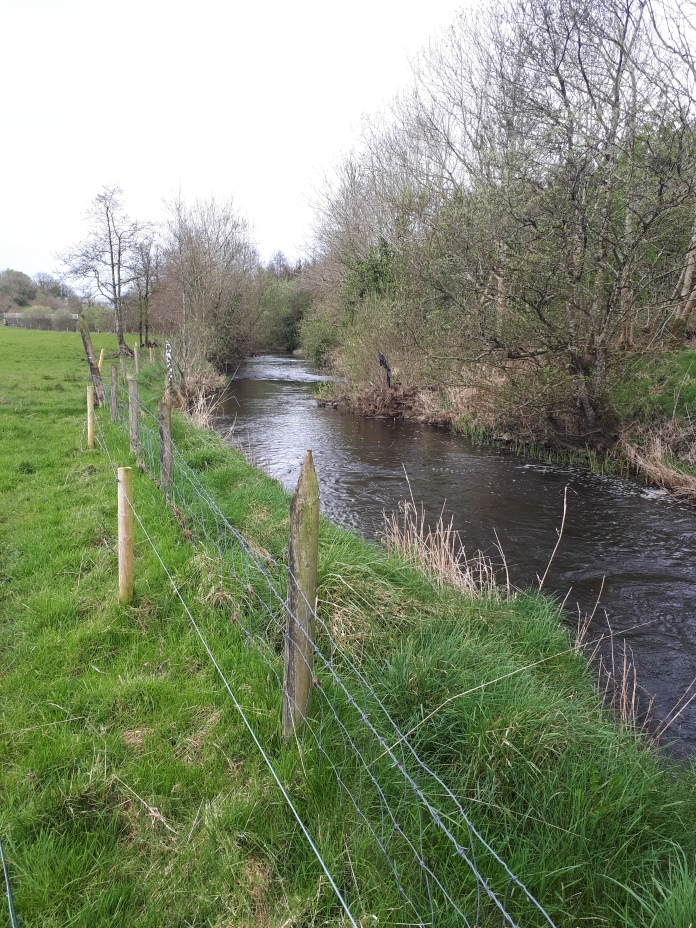 I was due to be home for 4pm and by now I had wandered a distance from the car. A good looking lie under the far bank required my attention before leaving so I dropped the nymphs in to the corner with a resounding ‘plop’. A final six-incher tugged at the tail fly and that was that for the day.

Crossing another fence, I cut across the expanse of rapidly growing grass and made for the road which was the other side of a cattle crush. A brisk march along the road brought me back to the car, red-faced and slightly out of breath. The drive home was used to reflect on another poor day when judged simply on results. No good fish, very little activity of any sort and a worrying lack of flies on the river were my lot for the day. But the walk through the wood and the sight of those pretty little six-inchers made up for any disappointment I might have otherwise felt.

I will scribble some more about the second trip of last Sunday soon…………….