Saturday was a beautiful day in the West of Ireland with light winds and high clouds breaking up the sunshine occasionally. The ferry leaves from the busy little pier in Roonagh and we lugged the tackle down the steps and on to the bulky ship full of anticipation. Twenty minutes later we jumped off and took the very short stroll to the end of the pier. Targets for today would be Pollack and maybe some rays or flats on the sandy bottom. This was very easy fishing, no long walks or scary descents to slippery rock ledges. Just drop the lines over the side and see what was down there.

As we were expecting pollack to be living close in to the weeds we all set up with spinning rods and small lures with tiny feathers on a trace. Gentle jigging of this type of arrangement is usually effective, as are the newer weighted shads. A couple of small Pollack were soon hoisted up from the depths.

Chris’s rod gave a kick and bent into something a bit more substancial which turned out to be a female Ballan Wrasse. Not long after Kirsten did the same and over the day we landed 4 or 5 of these lovely fish,

By 1pm the tide was slack and the fishing slowed to a halt. Time to take a wander around for a pint and a bite to eat. We sat outside admiring the view back to the mainland and generally putting the world to rights.

A fellow angler had kindly given us some spare bait so I set up a bottom rod when we got back tot he pier around 2.30pm. The squid bait was lobbed out to the sand and left to attract whatever was lurking on or near the bottom. I like squid very much, it is tough (so it doesn’t fly off the hook when casting) and has a powerful scent which I think is good for attracting fish. Some light taps came to nothing and I was just thinking about reeling in to check if the baits were still there when a much more definite bite developed. I held off striking until the fish had taken the bait properly, then lifted the rod. The fish was obviously not big and soon the shape of a small ray appeared below the surface.

He was quickly unhooked and released. New baits were soon on the bottom again and soon after a positive knock on the rod indicated more action. This time it was another of our old friends the Lesser Spotted Dogfish. I find it hard to dislike these wee pests, on some days they are the only fish willing to bite. 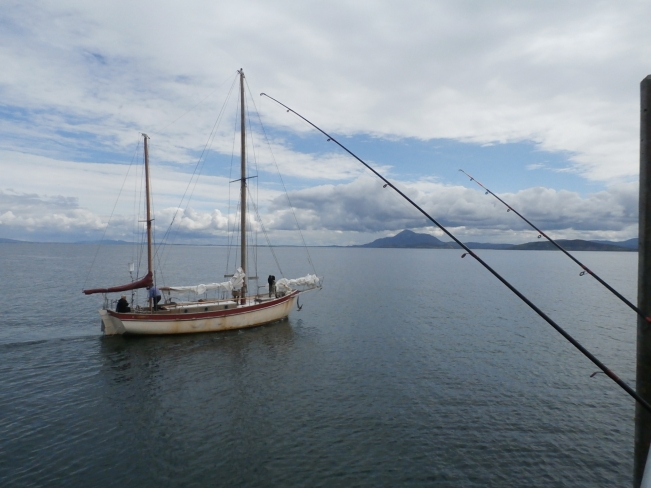 A steady stream of small Pollack and Wrasse kept us busy during the afternoon. While it was far from hectic sufficient fish grabbed the lures and baits to keep us happy and the views around us of the bustling harbour and the distant mainland were a constant distraction. all too soon it was time to pack up and trot back along the pier to the ferry.

There are numerous rock marks around the island for those who want to explore further, so why not make the journey west and try out Clare Island? You may not catch any record fish but you will have a day to remember.

Angler living and fishing in the West of Ireland. Aberdonian by birth, rabid Burnley fc supporter. I annoy the hell out of everyone by playing blues on a 3 string guitar (badly). Have been known to partake of the odd pint of porter. View all posts by claretbumbler