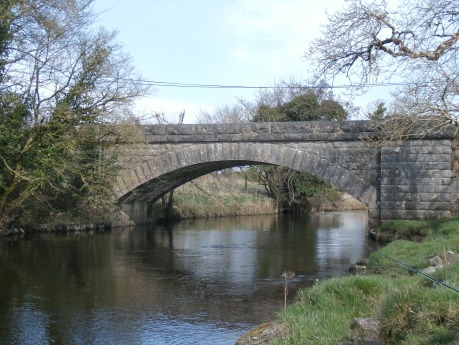 The bridge, good water below here

19th March. The bright and warm weather is unusual for this time of year and I decide to go fishing, hoping the good weather will have raised water temperatures and brought the trout on the feed. So with Bob Seger blasting out on the CD in the car I motor down to the River Robe again.

I park up near a bridge and take a peek over the parapet. The water is at pretty much at a perfect height and colour and even at the first glance I see Stoneflys hatching. There are lots of them in the air already and it is only 10.30am, so it could be a heavy hatch today. I set up a team of wets, tying on the same three I used the last time I was out, then I head down to the first pool. 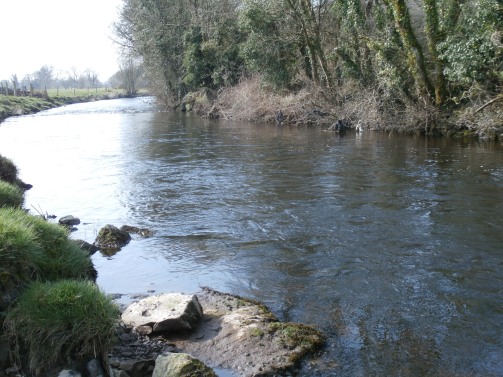 The first pool below the bridge

Half way down the pool the line tightens and a 12 oz trout comes easily to hand. It had taken the Plover and Hare’s ear on the middle dropper. A good start. 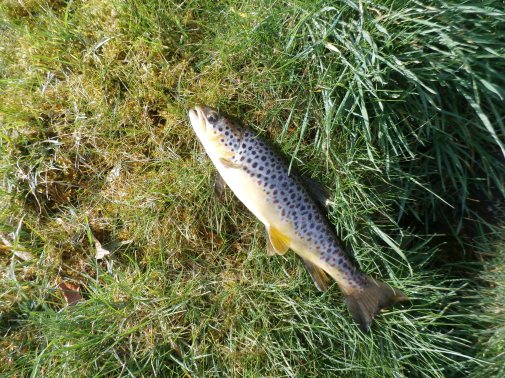 The first of the day

I work my way downstream, fishing carefully and searching out all the likely spots. Having fished this stretch many times I know these pools well and am full of confidence that more trout will come along. This confidence begins to evaporate though as no further offers are forthcoming. More of a concern is the total lack of surface activity despite the now heavy hatch of stoneflys and a steady stream of Large Dark Olives. One or two Iron Blue Duns are also hatching so it is unusual for the trout not to feed on or near the surface. By now the sun is very strong and maybe this is keeping the trout near the bottom.

I change the top dropper for another beaded nymph and try to pay more attention to any shaded lies under the far bank. This requires a lot of concentration to avoid hanging the flys up on bushes and branches on the other bank. I am absorbed in this task, watching where each cast lands and making small adjustments to angles, mends and speed. I’m happy the flies are fishing properly and I slowly make my way down river either crouched down to keep of the skyline or wading close to my own bank when required. It’s hot and bright and I am in a world of my own here. 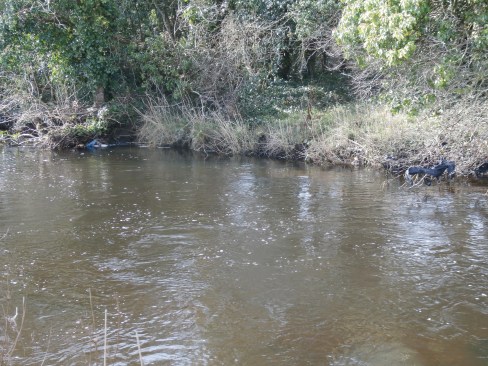 I cast as close to the far bank as I dare (the actual spot is above) and as soon as my flies touch the surface a large brown head appears and then promptly disappears as my line tightens. It is obviously a good fish and he tugs and runs with spirit but I get him to the net without much hassle. 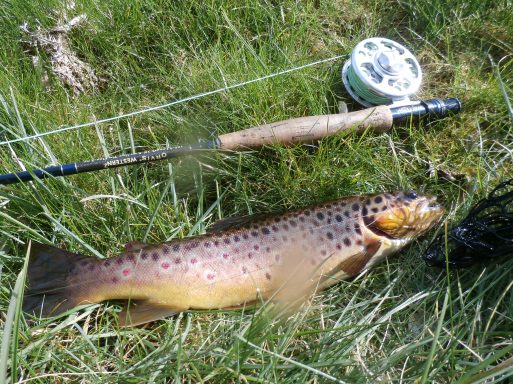 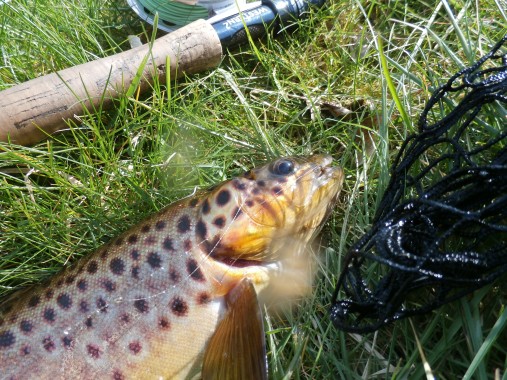 The Plover and Heare’s Ear has done the business again. I was lucky on this occasion as my cast must have landed just as he was looking up. I estimate his weight at nearly a pound and a half and after a quick couple of pics he is popped back into the water.

I continue to work my way down the river. A kingfisher darts past, a flash of azure and orange. Another couple of smallish brownies are caught and released, then one of nearly a pound comes to the net. 5 so far and it is not even noon yet. 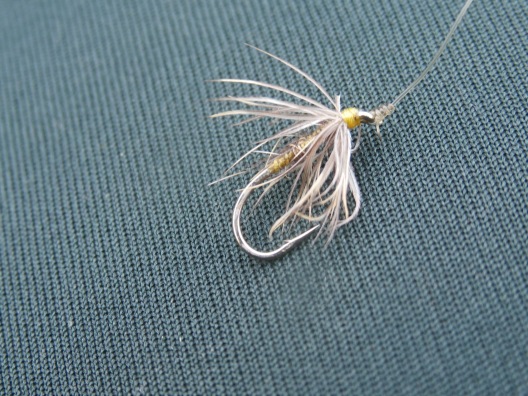 Poult Bloa. This one is heavily dressed for fast water 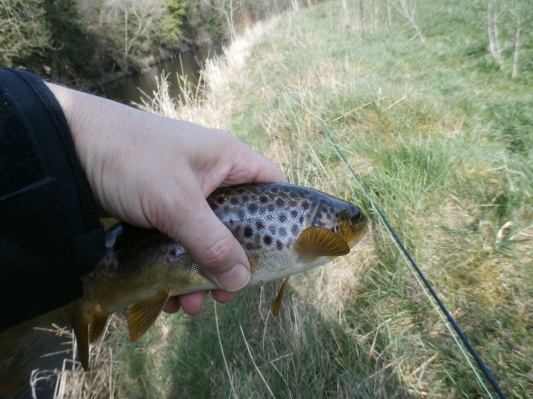 I have only seen 2 fish rise so far, hence the reason I am sticking with the wet fly. 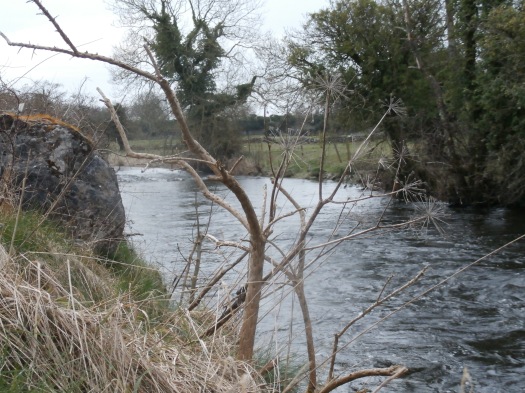 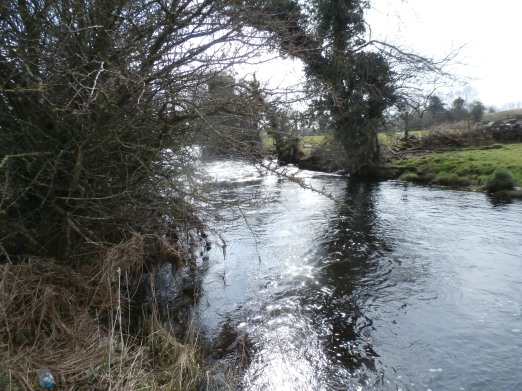 I lose two fish in quick succession, both of them hooked at reasonably long range (for a small river). To mitigate this I find a gap in the thick gorse and bramble bushes and try again but this proves to be a mistake. The line catches on a bramble bush and I spend ages retrieving line and flies.

I pick up a small trout and lose another of similar size and I push on down to a good pool I know. 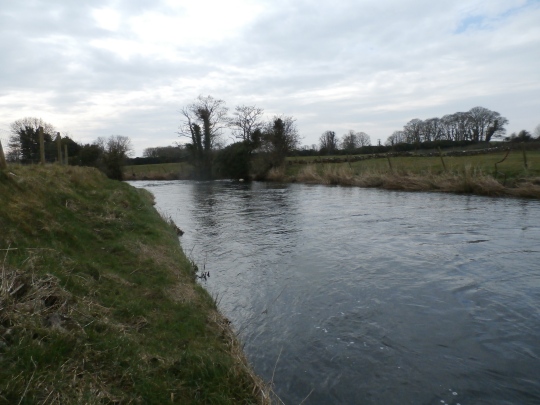 Another small lad is landed quickly after only 3 casts in the neck of the pool and I rise another soon afterwards. I cast again and the fish has another go at the fly but fails to make contact. Lift, cast, mend and lengthen the line so I can try to induce a take with a slow pull as the cast reaches the trout’s lie. Bang, it works like a dream and the reel loses 5 yards of line in one rush. But there is something wrong – I see the trout as he comes to the surface and he is no more than 8 inches long. Then is dawns on me, I have hooked two at the same time! 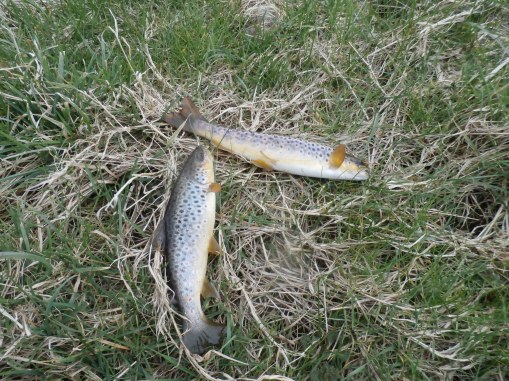 A good job they were not bigger!

They are like 2 peas in a pod and both are safely returned. It has been years since that has happened to me. The rest of the pool is fished out with further action and I trudge on again to a tricky little pool below. There are very few flies hatching now and I have already decided to call it a day after I fish this one 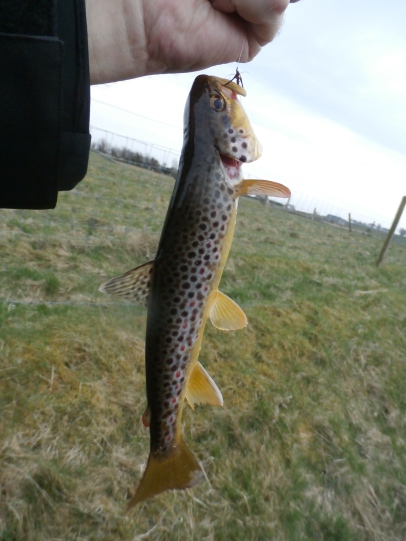 Half way down the pool I catch a lovely 12 incher on a Poult Bloa which I had just tied on. Every fisher knows that warm glow of self satisfaction when a newly wetted fly does the business. It must be like a football manager making a substitution and the new striker goes and bangs in a goal right away.

I check everything is in order and re-cast. This is an awkward pool, there are multiple flows and a big back eddy at my side. Keeping the flies moving and controlling the line is difficult. To get under the bushes on the far bank I have to side cast too, so this rapidly degenerates into some kind of technical examination of my skills. To be honest I had all but forgotten about the trout until an almighty wallop brought me back to reality. Fish on! 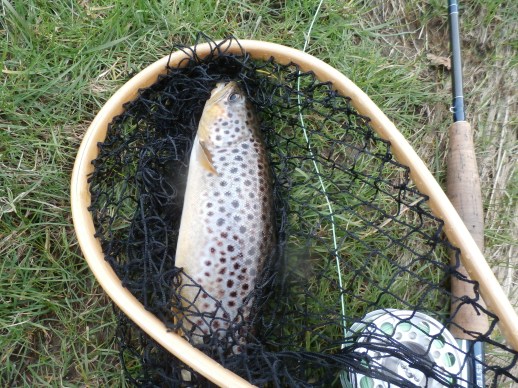 Safely in the net

This turns out to be a cracking brownie of around a pound. Back he goes and I wind in and start the long walk back to the car. As I re-trace my steps I ponder the day. 11 trout, all on wets. No surface activity. A good ratio of hooked to landed. I pack the gear into the car and take one last look at the river. For a river trout fisher days like today are just about as good as it gets.

Warren Zevon seems like a suitable choice of music for the journey home and I join in heartily as I head first west to Ballinrobe then north to Castlebar. I don’t think the smile left my face the whole way!