I mentioned the Raymond in a recent blog but my dressing of this old fly are a bit different to the ones you can buy in the shops. It has developed over the years and is a pretty successful fly for wild brownies in the big western lakes. There is a common acceptance that the original pattern was tied to imitate some kind of sedge fly and as such it was used from mid-season onward. My tying is much more impressionistic and is really just a pulling fly with bright colours to attract the trout. This is a fly you can get great satisfaction from tying, it looks great and it is one which always attracts comments from fellow anglers when they see it.

Hook sizes are 8’s or 10’s, heavy wet fly hooks. I use olive tying silk but any colour will do.

Tag is a couple of turns of silver tinsel and the tail is a golden pheasant topping. 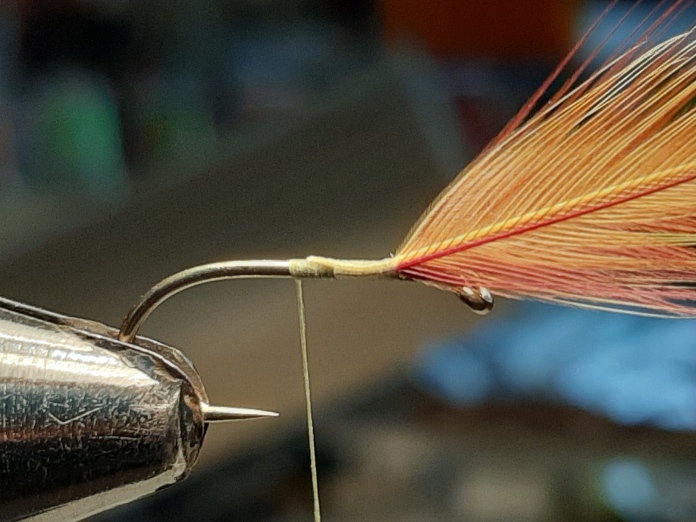 The rib is fine oval silver tinsel (I use Veniard no. 14) and the body is made from pale olive fur dubbed on to the tying silk. I sometimes add a couple of turns of orange fur at the tail end of the body.

There are two body hackles, a crimson and a golden olive wound together. i sometimes use a claret hackle instead of red to give me  more subdued fly. The throat hackle is a pinch of fibres taken from a golden pheasant topping which is dyed red and tied in as a beard below the hook. In front of that wind a couple of turns of a bright green cock hackle. On smaller sizes it is easier to add the green as a second beard hackle instead of winding it (there is a lot going on at the head of this fly!)

The wings are a bit fiddly but worth the effort. Married strip of swan dyed yellow and red form the under wing and over that I tie in bronze mallard. 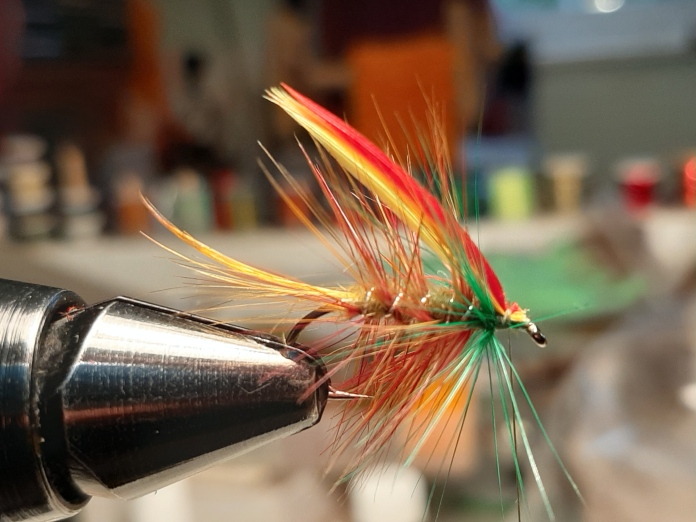 The head hackle is a grizzled cock hackle dyed bright blue. I give this many turns for a bushy effect.

This is a typical Irish style wet fly with many hackles to add the illusion of life. I can see no reason why it would not work on Scottish lochs too so maybe some of you Jocks might give it a try and let me know how you get on with it. I never seem to catch very many trout on this fly, but the ones which do take it usually seem to be bigger fish. Don’t ask me why that is!