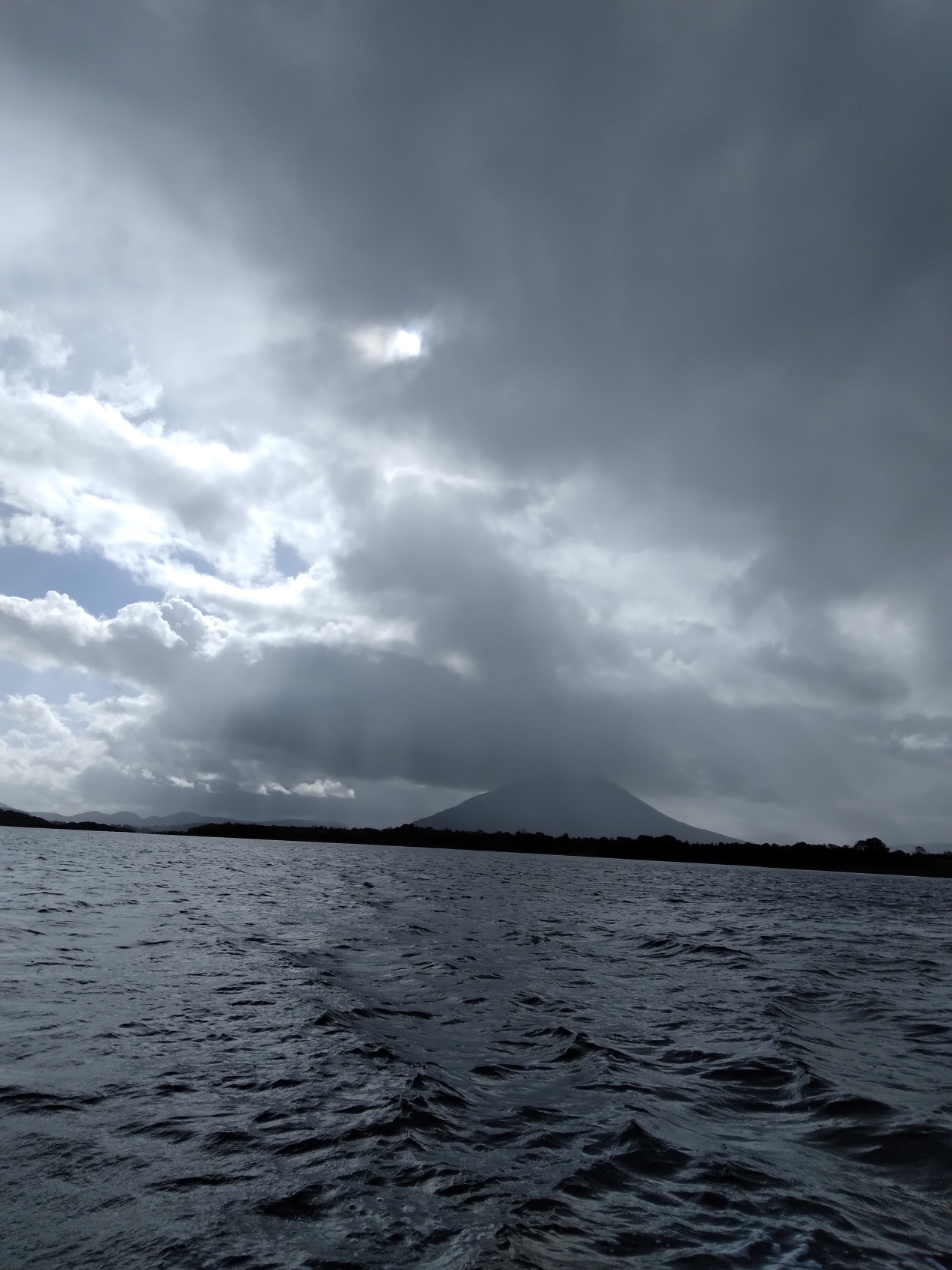 The Eurithmics, fronted by fellow Aberdonian Annie Lennox, released hit after hit back in the ’80’s. ‘Here comes the rain again’ popped into my head as the sky darkened and huge, cold drops fell on us with ever increasing intensity as we putted along the shoreline. The downpour was so intense I had to bail water out of the boat. Huddled against the storm, I turned so the weather was at our backs as I squinted throught the semi-darkness to get my bearings. We must be mad fishing in this!

The past two Sundays have seen me out on lough Conn. I was not fishing but Frank was keen to reconnoiter the lough for pike so we braved the autumn weather. Last Sunday we tried the bottom end of the lough by dint of borrowing a boat based in Brown’s Bay (thanks Bob). Yesterday we used my boat, fishing all the way from Pike Bay to Gortnore. With the end of the trout and salmon season we had the whole lake to ourselves. Some might unkindly suggest that nobody else was foolish enough to be out on these days!

The same method was employed on both days, Frank set up two long trolling rods, one on each side, and trailed various lures 30 yards behind the slowly motoring boat. Both days were similar with variable winds, heavy showers and some bright spells. The noticeable recent drop in temperatures has had a dramatic effect on weeds and they are dying back rapidly. This was one reason for trying the lough, we thought it might just be possible to fish some places which have been out of bounds all summer due to the luxuriant weed growth. Conn is getting weedier with every passing year and whole bays are now unfishable after the mayfly.

Let me say right from the off that we blanked last Sunday. Not so much as a nibble came our way despite long hours trying different spots. Spoons and plugs flickered enticingly in the water but the pike were seriously unimpressed. Massbrooke, Colman Shallows, Terry point, Bilberry Island, Glass Island, Chain Island, Fir Tree Point and a host of others were tried but to no avail. The morning was spent motoring around, sometimes dry but mostly drenched, in an abortive effort to locate the pike. We could see the dark grey clouds hurrying in from the west before they unloaded on us. No sooner had we dried off when the next belt of rain arrived. It was a tough auld day to be sure. On the plus side, the high winds which had been promised never materialised and apart from squally conditions during downpours the wind was not an issue.

Yesterday we loaded up the boat after baling copious amounts of water from her then headed out for the northern end of Conn. I suggested Castlehill for a start as I know there are some good pike in there. My logic was based on the reeds where my boat is berthed. These reeds had been 5 feet tall only three weeks ago, now there had died back and were barely poking above the surface of the water. Also recent rain had pushed the water level in the lake up by a couple of feet. A combination of both these factors would allow us to troll the centre section of Castlehill with out too many hang ups in the weeds. Frank had clipped on a weedless Toby on one rod and a new pink and silver Mepp on the other. The first shower descended on us just as we rounded the point and entered the bay.

It took me a couple of runs to figure out where was fishable and where to avoid but I found some relatively weed free water and trolled up and down in the rain. The rod with the Mepp bucked and was pulled hard over so I killed the engine and wound in the other rod as Frank bent into what was obviously a good fish. I know from experience how hard these Castlehill pike fight and this lad was no exception, he really tested Franks knots all the way to the net. I slipped him into the meshes and hoisted him inboard, a fine, thick-set fish of around 16 or 17 pounds. The hooks took some delicate work with the long handled pliers to remove but he was soon back in the water. Cleaning up, we discussed the fish and Frank told me it was his best ever pike. I wish I had known, I would have taken a photo of it for him. The rain which had eased off a little earlier returned with a vengeance but we were soon fishing again. After the failures the previous Sunday it was good just to get a fish in the boat!

One more circuit of Castlehill then we set off for pastures new, trolling all the way. I hugged the shoreline and we slowly made our way around the two pins off the middle of Mayo via Chain island and Gallaghers. Up along the Errew shore in what can only be described as a biblical deluge, we set a course for the islands in a wind which had turned to the north. Lunch beckoned so we pulled in to the shore and brewed up, the sodden twigs for the Kelly Kettle creating more smoke than flames. It was a relief just to be able to stretch our legs though, a full day spent trolling makes for stiff joints!

Refreshed, we loaded up and turned for Roe island, one of the top spots in the northern part of the lough for trout. Would there be any pike there? I carefully steered the boat so the baits would cover the shallows, adjusting engine speed to cope with turns and changes in our attitude to the wind. The baits remained unmolested so it was off to Cloonaghmore next, going as close to the shore as I dared given the inevitable banks of weed below the surface of this shallow part of the lake. Again, all this normally productive water was lifeless so with Gortnore only a hundred yards distant I swung us around and began retracing our steps. All the way back to Castlehill the baits were behind us in the water but not a single bite did we get.

By 4pm we were back in Castlehill. Frank had been trying different baits all day but now he was using two of the new Mepps, the pink one on one rod and a red one on the other. A perch grabbed the pink spoon, our only one for the day. I suspect the size 4 was just a bit too big for the small perch in the lough and a size 2 would possibly have caught some more. Within a few minutes the red Mepp lured a small jack which turned out to be the last fish of the day. A fish of around 4 pounds, it was thankfully lip hooked and soon returned unharmed.

So what did we learn from the last two Sundays? There are big stocks of pike in the lake but they can be very localised. The object of trolling the whole lake was to try and locate the pike at this time of year and based on our findings it looks pretty conclusive that Castlehill is where the green fellas are hanging out right now. Only a tiny fraction of the bay can be fished but in a few weeks time the weeds will have died and much more open water will be fishable. Frank likes to use small baits for pike and he catches a lot of them every year. I on the other hand prefer much bigger baits and I might leave my boat on the lough for a few weeks yet and try my big spoons in Castlehill before the end of the year. I think there are twenty and maybe even thirty pounders in there.

It is that time of year again and on Saturday the call went out for club members to help out with the boats on the Glenisland side of Beltra. A new slipway with rollers was built this summer and this was going to be our first time using the new facility. It worked a treat and in only 90 minutes the team had bailed all ten boats, dragged them out of the water and either turned them over in the field or stowed four of them in the boathouse. Many hands make light work and all that.