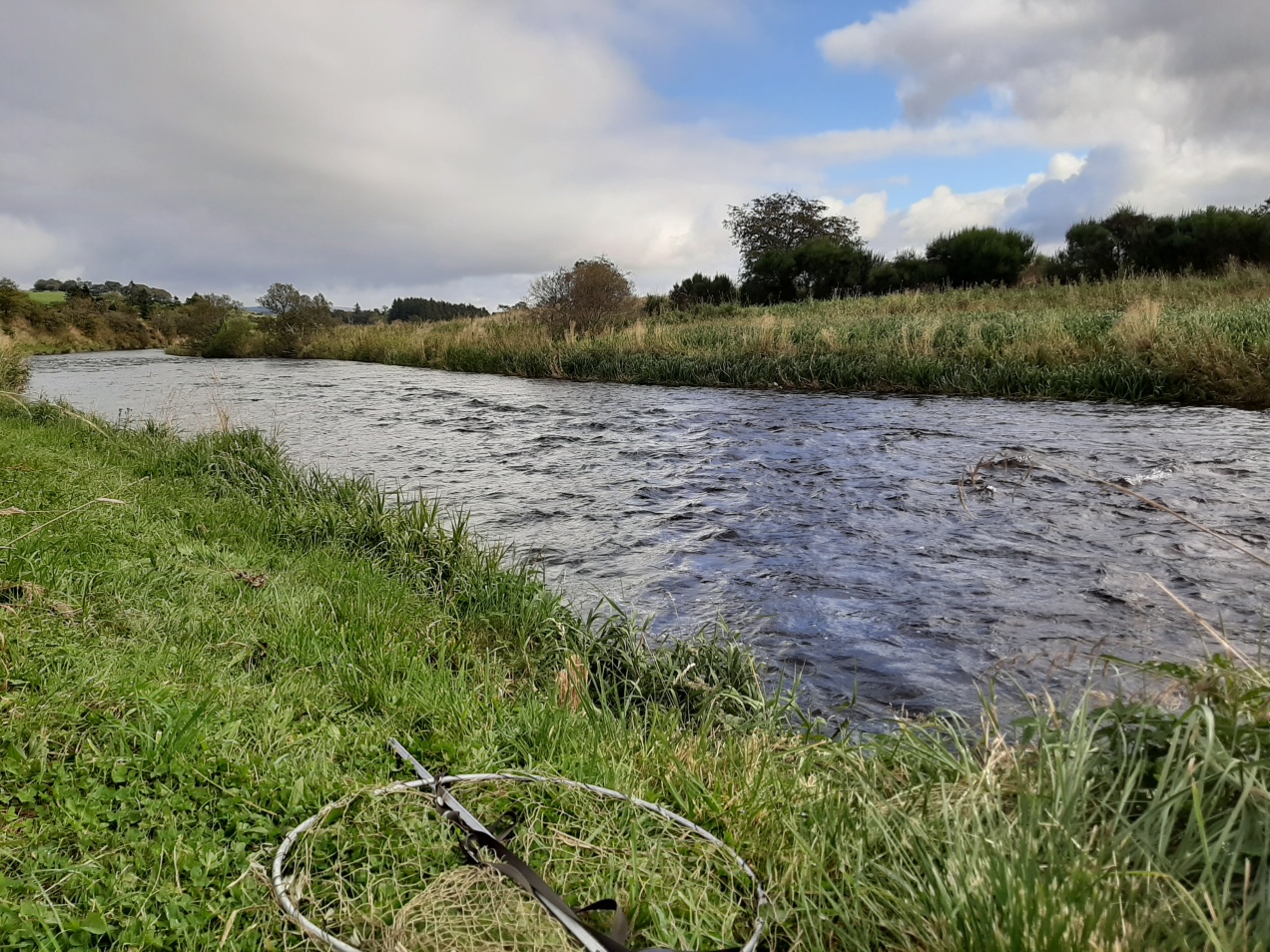 I drove off the ferry at Cairnryan into stygian darkness filled with rain, the long drive North through the night ahead of me. I was back in my homeland again and the rain perplexed me. All the way to Glasgow it lashed down from the heavens, flooding the road in places and making me think of swollen rivers which would be out of ply for days. The Stincher was huge and the Ayr full to the banks as I crossed them in the early hours of Saturday morning. What would the Aberdeenshire Don be like? I had booked a rod on the lovely Littlewood beat for the coming Monday and I needed some rain, just not as much as the South West was suffering that Saturday night.

The downpour eased off somewhere around Cumbernauld and there was dense fog lying around Stirling before it all cleared by the time I was nearing Dundee. The North East appeared to have missed the rain again and now I was fretting there had not been any precipitation to lift the Don a few inches. The old VW chugged through the night under a clear skies on the final leg of the journey. I shut the engine off at exactly 6am and I slurped a quick cup of coffee in Aberdeen before some well-deserved sleep and dreams of rivers either in raging spate or as dry as a bone. I woke a couple of hours later to another downpour outside.

All of this fretting about rain comes naturally to us salmon fishers. The timing and quantity of precipitation can make or destroy a day on the river. I had been studying the long range weather forecast for a week before I booked Littlewood, banking on a wet Saturday followed by dry conditions on Sunday.   The Don was running only 4 inches above summer level the previous week, not enough to fill me with confidence that salmon would be on the move. I wanted a rise of a foot or so on Saturday/Sunday and for the river to start falling again on Monday. In that respect Littlewood was a gamble. It does not have any well-known holding pools, deep sanctuaries where salmon hold up in times of low water. It is a streamy beat where running fish can be picked up in shallow water or from odd corners where they stop briefly on their way up river. Like a piscatorial Goldilocks I wanted the river not too high nor too low, just somewhere in the middle and slowly falling.

I spend the day with family and catch up on all the news in Scotland. A good day, topped off by a hard fought draw at ‘Villa for the Clarets. I’m happy enough with 10th spot in the Premiership after a tough schedule of games since the start of the season. Everton visit Turf Moor next – another hard game for us.

A dry day. Tackle wise I would equip myself with a 13 foot Spey rod and no. 8 lines. A range of tubes and flies with a few spools of nylon were all I planned to take with me. Littlewood extends to 4.5 miles, a lot of water to cover so I wanted to travel light. With time on my hands I checked over the gear, paying particular attention to the reels and leaders. The reels needed a clean and some light oiling which was only the work of a few minutes. Old leaders were cut up and replaced with new ones in readiness for the next day. I made heavy leaders tipped with 18 pound breaking strain tippets. This may sound over the top but some big salmon run the river Don at the end of the season and fish in the high teens or low twenties are not unheard of. Better safe than sorry.

In the afternoon I went on to the Fishpal site to check water levels. This is a hugely helpful service which I would encourage all anglers to use if they are fishing salmon rivers in the UK. It looked like the top of the river did not receive any rain at all as the levels were steady. The same was not true of the rest of the watershed though. Parkhill, on the lower river was at two-and-a-half feet above summer level and falling while, more interestingly for me, Bridge of Alford, a mile or two below Littlewood, was registering one foot and 3 inches and falling. With no rain that should equate to roughly 12 inches of water on Monday, as near perfect as you could ask for on Littlewood. With no fishing on a Sunday in Scotland any salmon in the system can move unhindered on their journey upstream. Many of the fish will be coloured but there should be some fresh ones mixed in with the old stagers. I was in with a chance!

This beat has a historical connection, the much maligned politician Neville Chamberlain used to fish it frequently. It is situated on the left bank of the Don upsteam of Alford. Here the river is about 30 yards wide and comprises a series of runs and glides more than pools. It is great fly water throughout the whole 4.5 miles length of the beat but it does demand a high level of experience to get the best from it. Some sections can be covered using overhead casting but there are lots of bankside trees meaning spey casting is definitely a better option. Fishing water like this demands the ability to read the water and control your fly more than great technical casting ability or depth control. By that I mean there is no need for fast sinking lines or shooting heads as the width of the river and depth of the water are easily manageable with conventional tackle. Mending the line and knowing how/when to hang a fly over a potential lie are keys to success in my opinion.

I had packed three boxes of flies and ferreting around in various jackets and the back of the car I turned up another three boxes! Just how many flies a salmon angler actually requires is something of a moot point. One box is in all honest sufficient but being a fly tyer it is impossible to restrict myself in that way. I rooted out some patterns which would definitely not be required on Monday then roughly organised the more likely ones into one box. The others were chucked into the back of the car, ready if called upon but I felt it unlikely I would require much else than the one box now in my jacket pocket. My usual patterns were in the box, Cascades, some shrimps, Hairy Mary and Willie Gunns.

Up early. Coffee. Fill a flask and make up some sandwiches. No rain.

I battle my way against the flow of Monday morning commuters as they stream in from the towns and villages around the city of Aberdeen. When I grew up here in pre-oil days the likes of Westhill and Kingwells were small and quiet, now they are home to thousands of workers, many of whom come into the city each day. The traffic thins after Elrick and I head west to the pretty town of Alford. Hopes are high today and confidence is a necessary attitude for the salmon angler. Without belief there is little chance of sport. Confidence is something which grows and is honed by experience. The tiny lessons which are picked up every time we fish add to the lexicon of detail stored in our brains. Things which are impossible to convey in words can mean so much to us, things like the tension on the line when the fly is swimming properly, the look of a lie at the right height of water. Understanding these and many more details are what make some anglers more successful than others. Sure, luck has a huge role to play but experience breeds confidence and confidence leads to fish on the bank. This morning I am feeling confident.

My first view of the river is at the same time encouraging and perplexing. There is some colour and the height looks to be more like 2 feet above summer level. I drive to a parking place near the top of the beat and tackle up. A size 8 Hairy Mary goes on the end of the line then I am off down to the river bank. 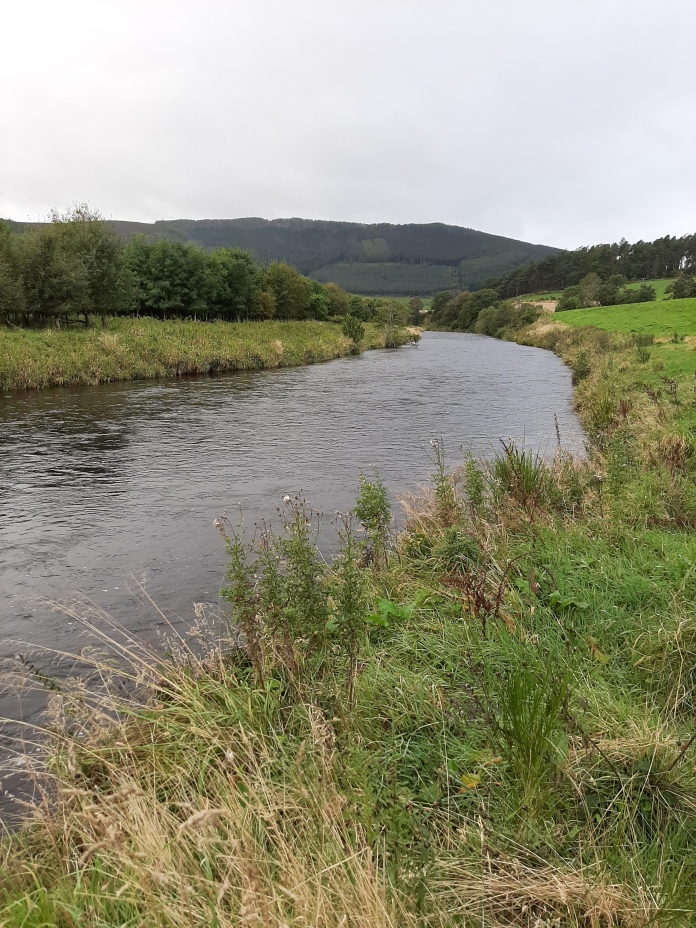 I fish through a couple of pools, getting the feel of the rod and my surroundings. The banks are generally rough and I am finding it tough on my arthritic ankles almost from the off. I concentrate on my spey casting which is going OK. 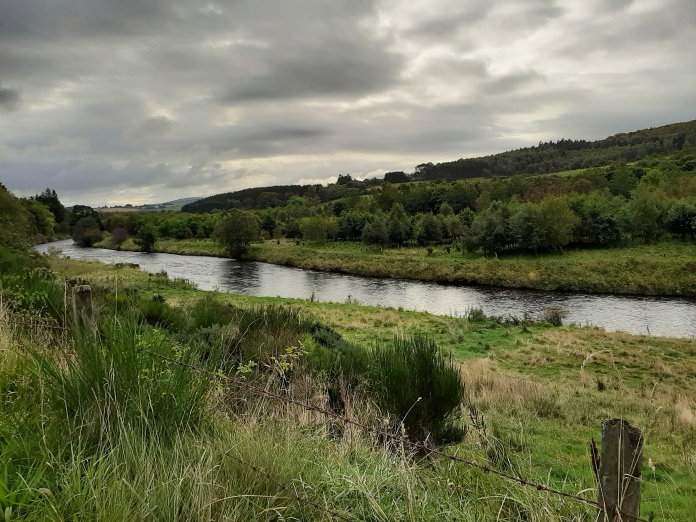 There are some trees which reach all the way to the waters edge, barring downstream progress so I walk back up to the road and skirt the trees. Crossing a field I reach a lovely pool which has given me fish from the opposite side in the past. 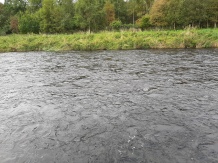 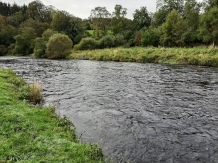 I fish it down then change flies and go down it one more time. Near the tail the line tightens but my momentary joy is short lived as a small trout proves to be no match for the salmon gear. 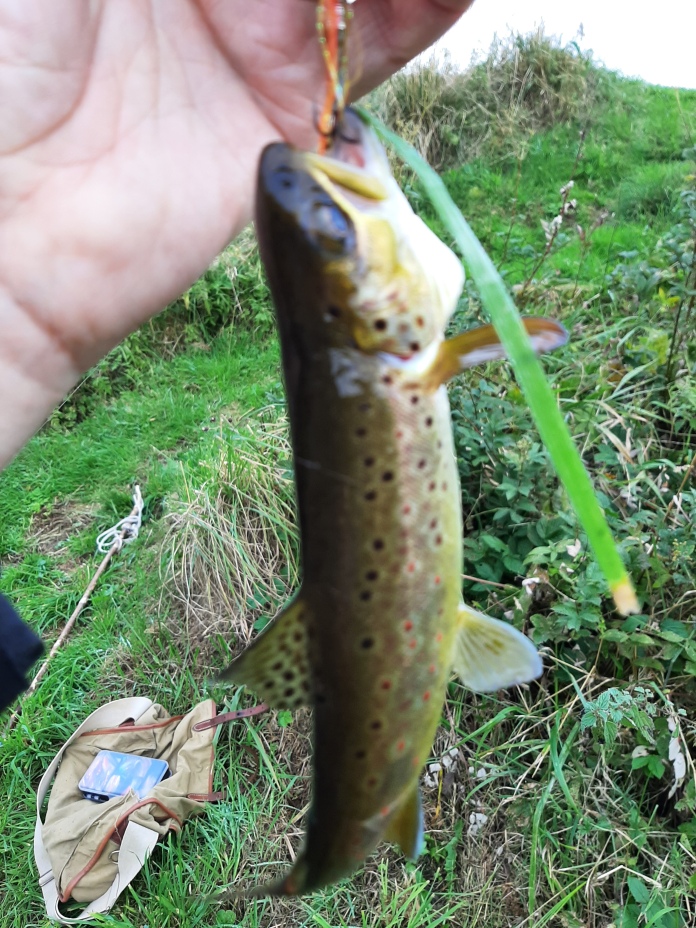 I stick with the small tube as I fish through the next couple of pools but there are no offers here. 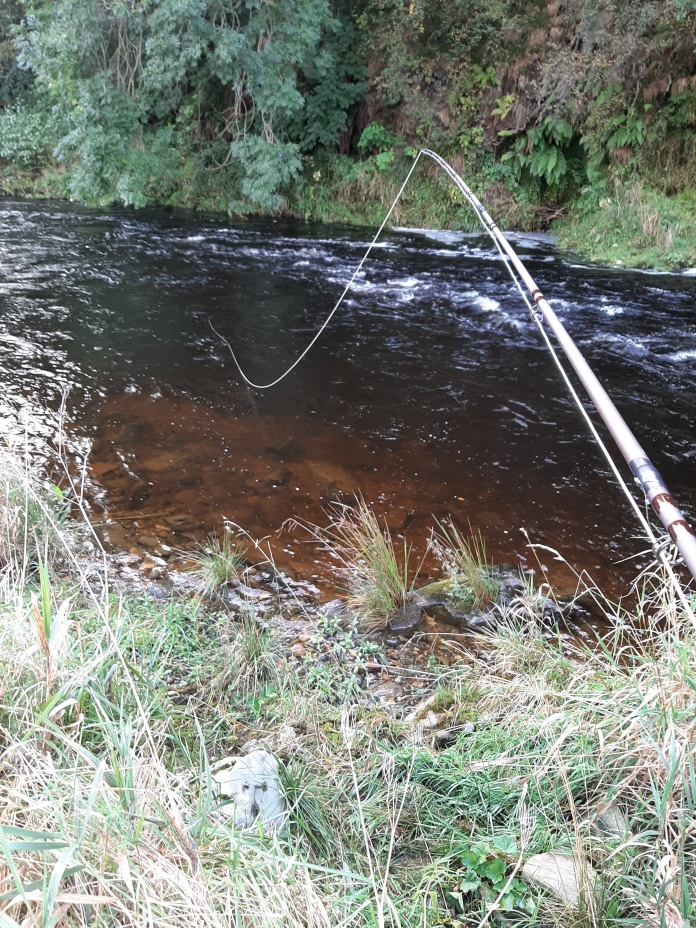 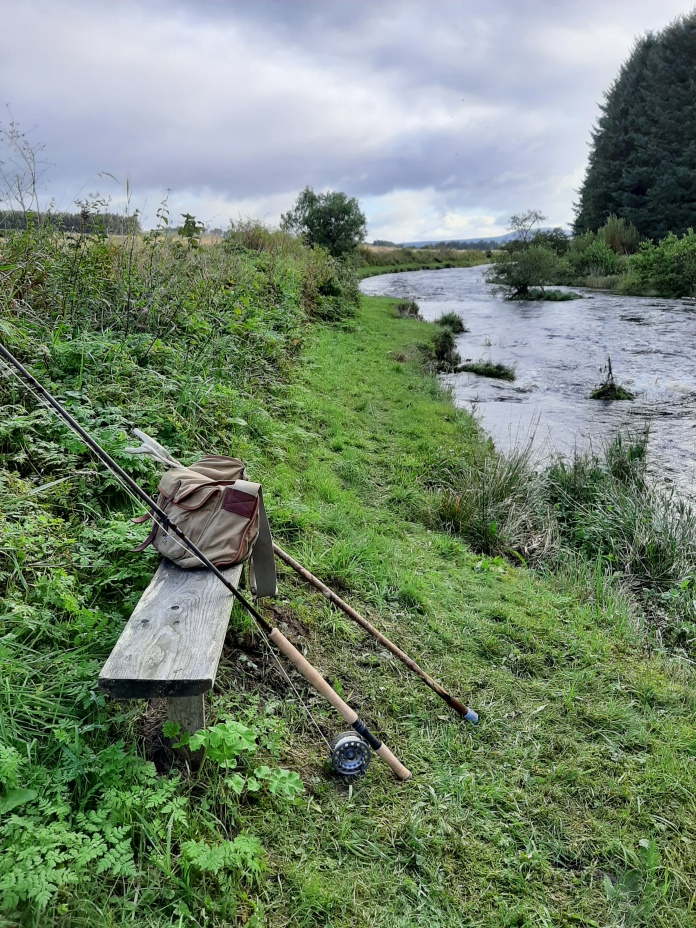 tail of the pool. The Don in Aberdeenshire

I switch flies and put on 22mm brass tube to get me down a bit and while I’m at it I change to a sink tip line. I sense the river is actually rising but as I am working my way downstream it is hard to be sure. 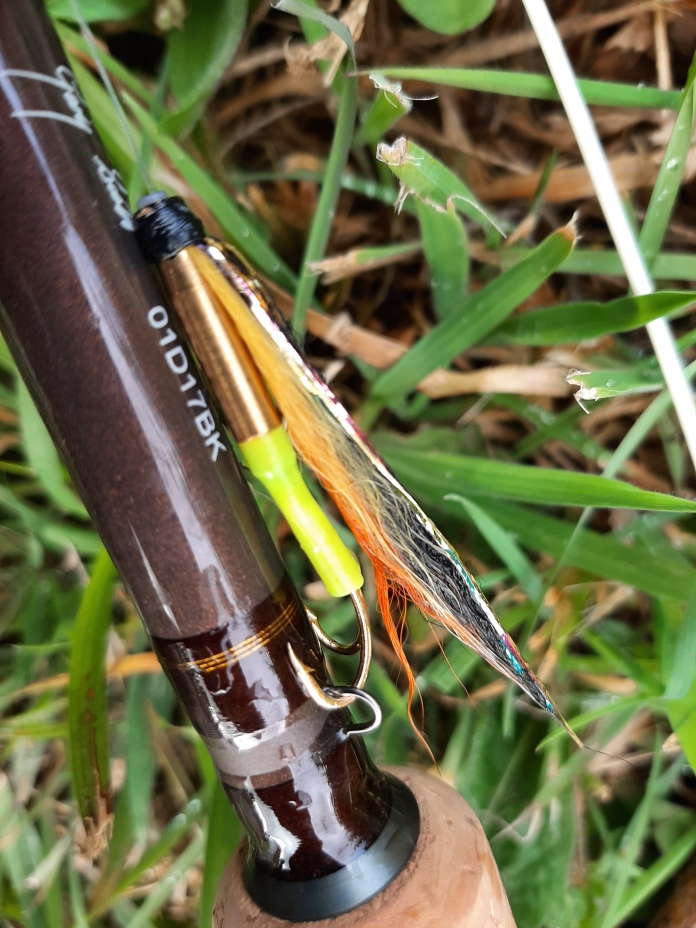 There is a lie in a small pocket to the side of a fast run which looks inviting and I swing the heavy tube through it a couple of times. Bang! Fish on and just as quickly he is gone. I pull in the line to check in case the fly had fouled on the leader or I had somehow broken a hook but no, everything looked just right. A simple case of bad luck this time.

I continued to work my way down the river, covering every inch of likely water. There are some lovely pools on Littlewood and I swam a number of different flies through them all on Monday, to no avail. 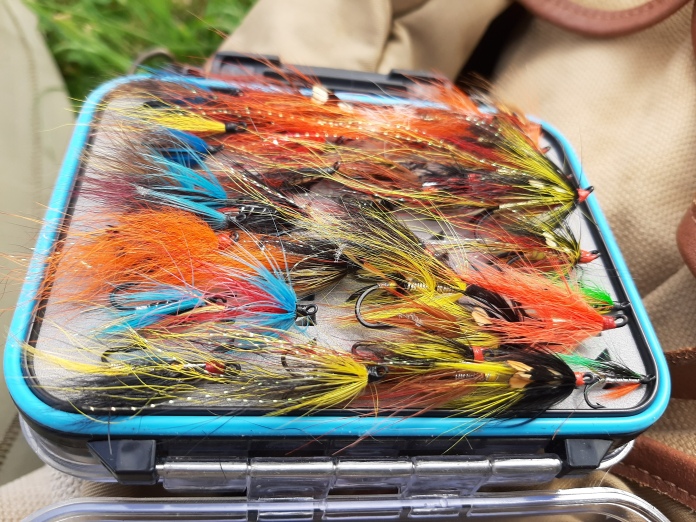 In the end I had to concede defeat and as the rain started to fall I packed up and left the river in peace. All my fretting about the rain was not entirely wrong, the slowly rising Don did not live up to expectations in terms of fish on the bank. That said, I had a great day out in the fresh air and with a small slice of luck I might have hooked the one fish that came to the fly.

For those of you who don’t mind rough banks I can thoroughly recommend Littlewood. It is very scenic and on its day it can be very productive. Just Monday wasn’t one of those days! 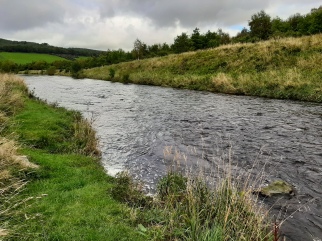 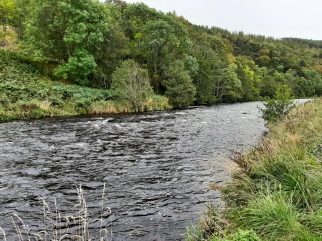 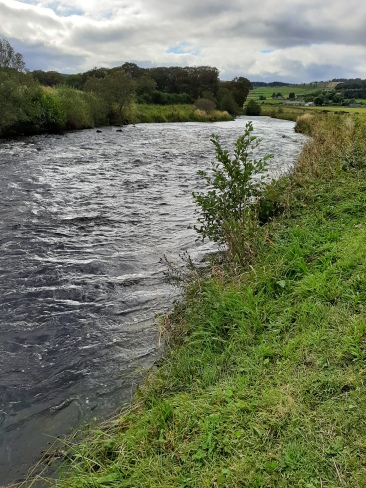 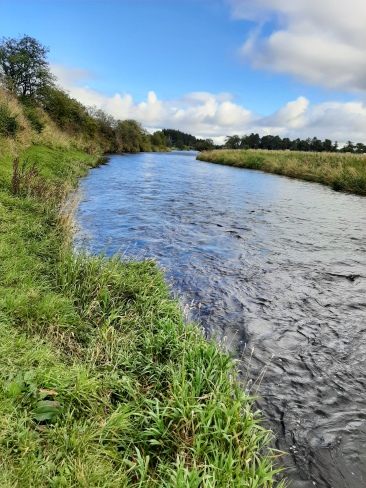 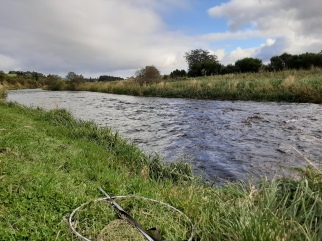 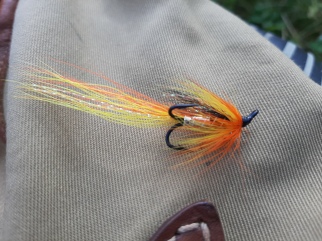