Skip to content
Posted on January 23, 2021January 23, 2021 by Claretbumbler
As an Interim Manager I lead an odd sort of life. I am either buried in work, often far from home, or I am unemployed and dossing about in Castlebar. The contract I am working on right now falls somewhere in between those states as I am working in Westport, just long the road. I get home every evening and even better, the hours I work mean I finish up at 1pm every Friday. So yesterday afternoon I left the old car in to Mick to get a small job done on it and came home to a warm house and an afternoon off. Bliss! Coffee in hand and Rory Gallagher on the turntable, I settled down at the vice to knock up a few flies. I know I am going over very well worn territory here with this post but spiders are a major part of my river fly fishing armoury and yesterday I was busy at the vice topping up the early season boxes. While they catch fish at any time it is the first couple of months of the season that I rely on them most. Some are copies of naturals like the Iron Blue or the large dark olive while others are more general patterns. Here is what I was tying. I started out with the good old Partridge and Orange. A size 14 hook, orange Pearsall gossamer silk for the body and a fine gold rib. I like a thorax of a couple of turns of peacock herl and a hackle of brown partridge back feather. Very simple but very, very deadly. I have tried them on bigger and small hooks but nothing is as effective as a 14. I see many anglers waxing lyrical about the partridge and yellow but I have caught very few trout on that pattern. Orange is king in my book. 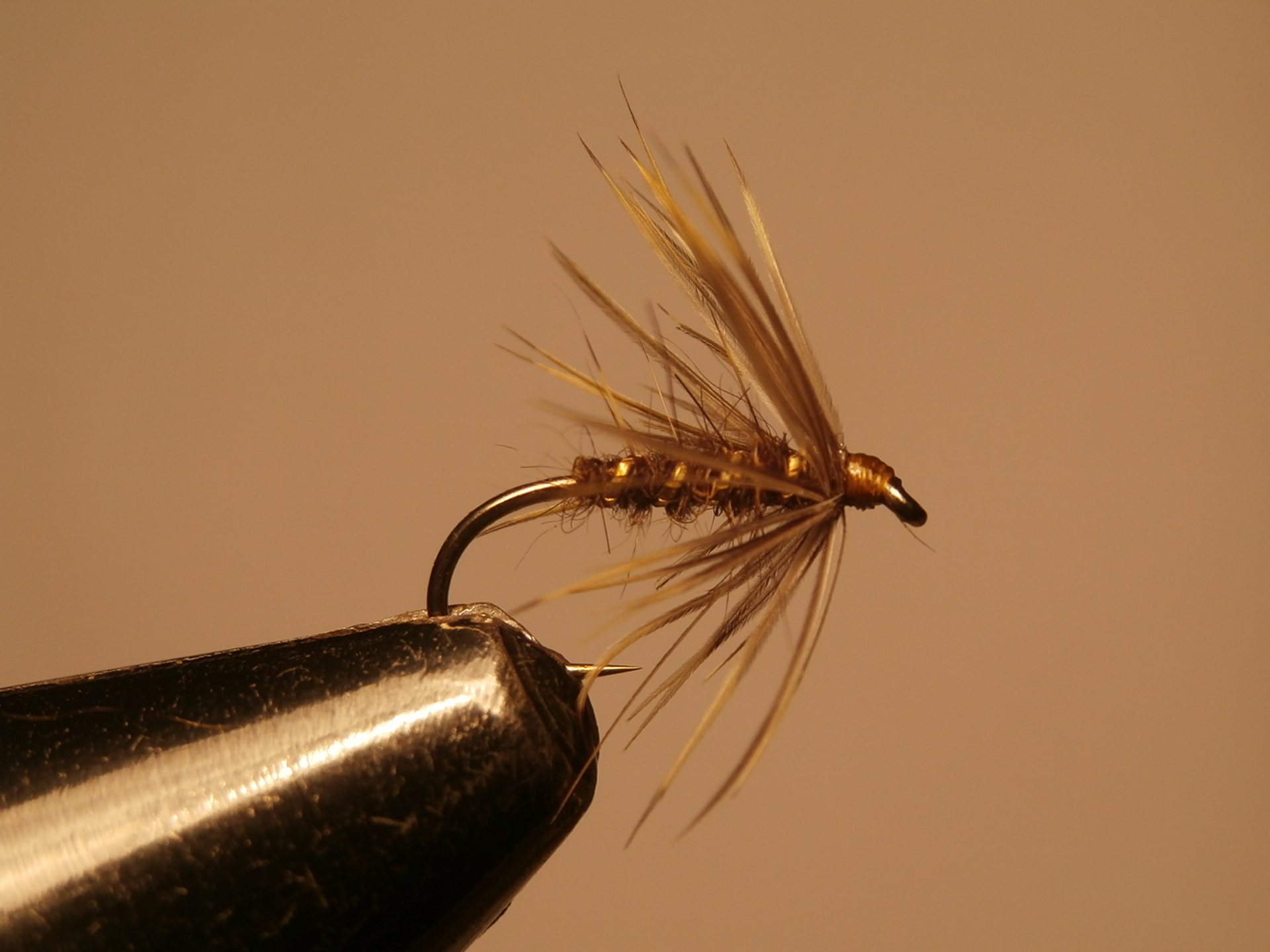 Then I moved on to Plover and Hares Lug. Yellow silk on 12 or 14 hook, hare’s ear body with either a narrow flat gold tinsel rib or fine oval gold and the hackle made from a golden plover feather. I am almost out of golden plover feathers and they are very hard to find these days. Black spiders now. Fl. orange tying silk and a flat holo black tinsel body with a silver wire rib for protection. A turn of a the small blueish feather from the upper side of a Jackdaw’s wing finishes this one off. The orange silk head gives a nice target for the fish. My olive partridge spider was next on the list. As size 14 again and this time olive tying silk body ribbed with fine gold wire. I make a few variations of this pattern by changing the hackle, it can be a natural brown partridge feather or the same feather dyed different shades of olive. For some reason I seem to normally fish this pattern in the middle of the cast. Whirling blue duns. Maybe not used that often these days but I like when olives are hatching out. Tails and hackle are ginger hen and the body is made for moles fur. I use yellow tying silk on a 14 or 16 hook. I tie then in both spider and winged versions, using starling for the wings. Pheasant tails. Where do you start with this fly, there are hundreds of variations. I like to use crimson tying silk and the body is made from the ubiquitous cock pheasant tail herls, but dyed yellow. the tail which is made from brown partridge fibres. The hackle is the same feather. One for May evenings…… Iron Blue Dun. Darkest Iron blue hackle and tails, crimson silk dubbed with moles fur on a size 16 or 18 hook. All too often I see Iron Blue Duns tied with hackles which are far too pale. When you see the natural on the water you will realise they are nearly black. My Ginger Partridge is a handy pattern for searching streamy water. A yellow sik body with a fine gold wire rib on a size 14 hook. There are two hackles, one turn each of a brown partridge back feather with a ginger hen in front. The blue dun I tie is very simple. Yellow silk on a size 16 hook. Heron herl, either natural or dyed olive for the body with a fine gold wire rib to give the herls some protection. A pale blue dun hen hackle at the neck. Of course you can add blae wings. Red spider. This is one for summer evenings. Usually a size 14 but strangely I have had success with a size 12 too. Red gossamer silk body with a fine gold wire rib and a red game hen hackle. You can add a lime green butt if you like but to be honest I can say that has proved any more effective. Partridge and hare. Yellow silk, fine flat gold tinsel to rib a body of dubbed hare’s ear fur. A brown partridge hackle to finish. Not a million miles away from a March Brown pattern but we are not blessed with MB’s here in the west of Ireland. A general nymph like spider that does well early on. 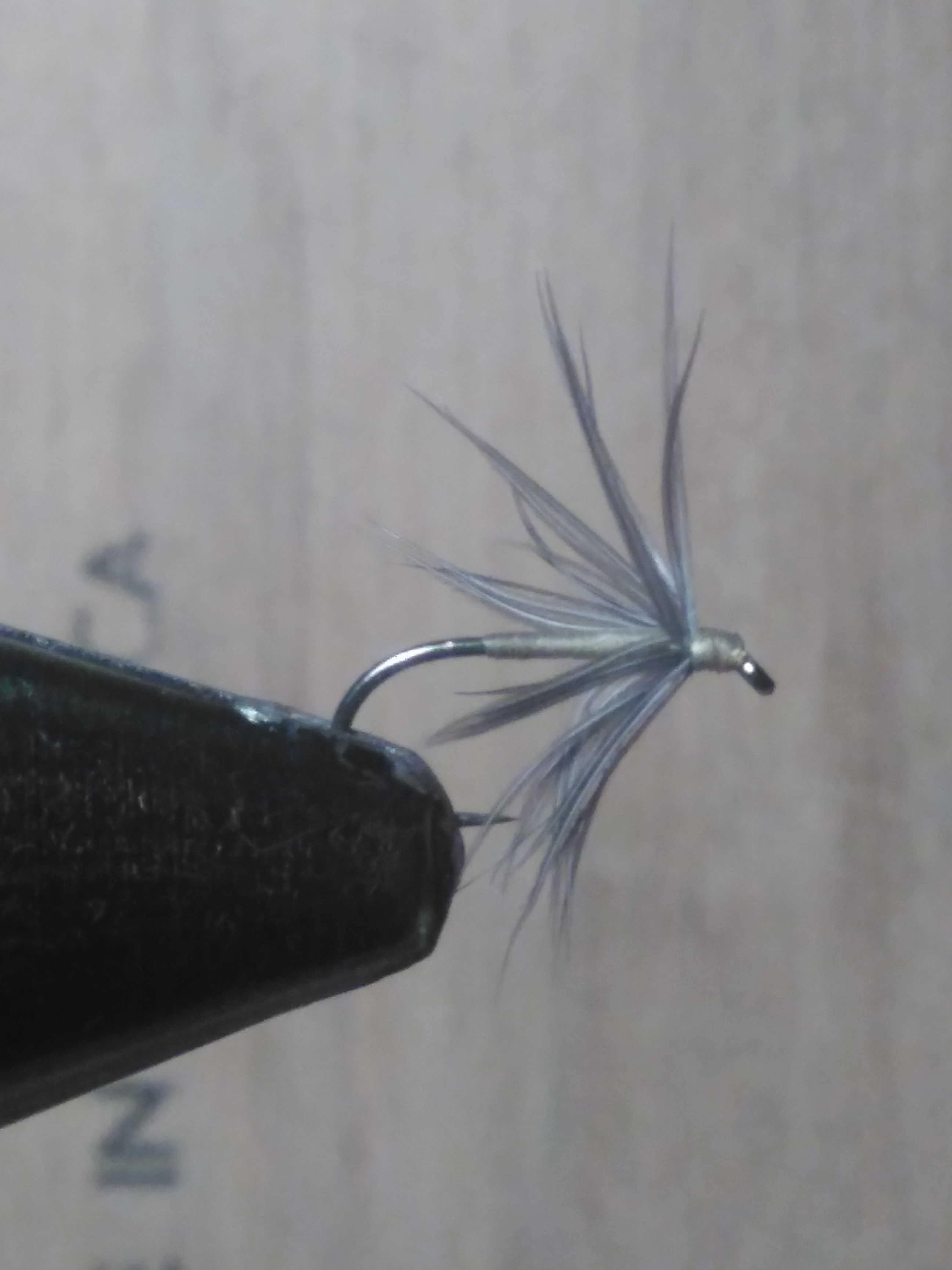 Grey dun. Two versions here, the light and dark. Hackle is the same for both, from the knuckle of a coot’s wing. Body is pale straw coloured tying silk for the light version and black silk for the dark one.