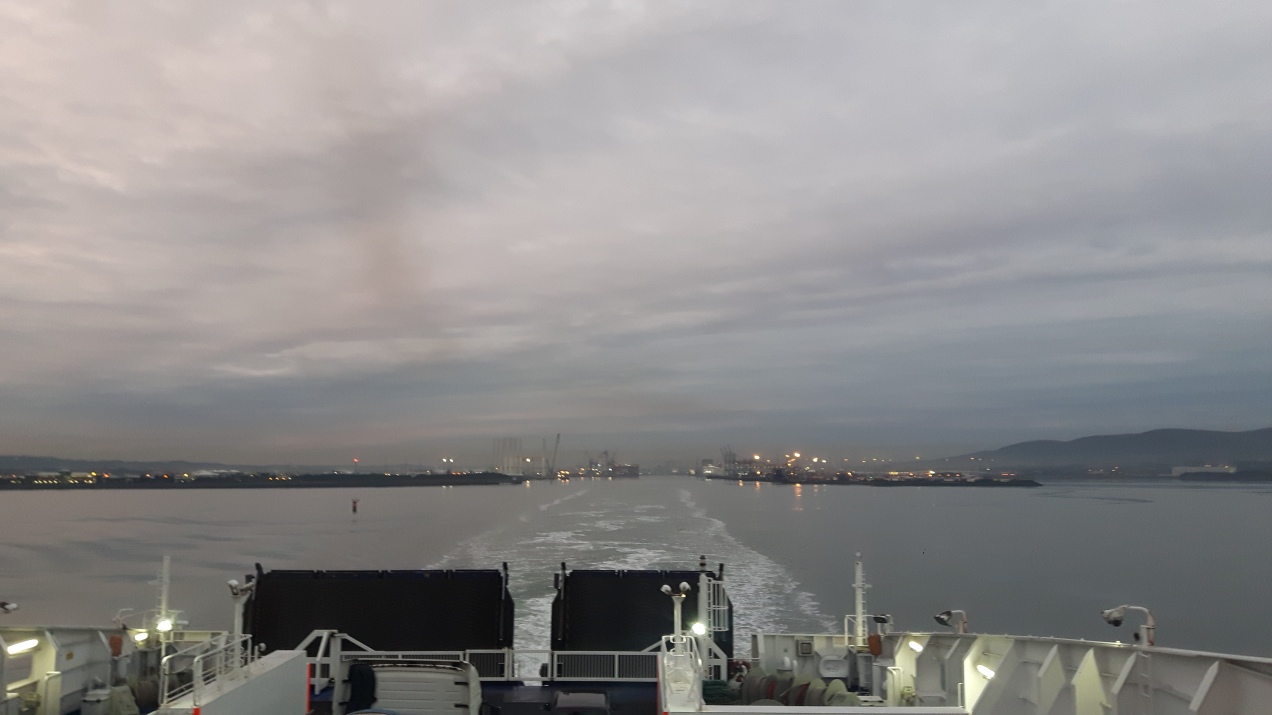 Getting back to Scotland twice in one year must be a record for me! 2018 was packed full of trips both for work and for pleasure but it was back in March the last time I popped across the North Channel to visit my family. I had hoped to make it over in October and squeeze in a day’s salmon fishing but work got in the way (I was in Holland instead) so I finally booked the ferry for a weekend in November instead.

These rare trips home always bring up a swirling mixture of emotions. I left the land of my birth 21 years ago at a point in my life where I was questioning the very fundamentals of my existence. All my working life had been spent in one industry and I walked away from a career which had stumbled and felt somehow alien to me. In my youth I had climbed the mountains, tramped across miles upon miles of Scotland’s wonderful land and fished so many of her bountiful rivers and lochs. Now I boarded a big blue boat and left it all behind to start over in a country I knew, but didn’t know (if you get me). The emigrants sense of loss, the self questioning ‘what if’ are always just under the surface. Looking back is always a risky business for those of us who got on our bike and peddled off to a new country. It requires an introspection and evaluation of one’s motives which can be uncomfortable. Every time I board another big boat to make the short trip from Ulster that backward looking questioning seeps into my consciousness once again. Edging noisily from the quayside in Belfast or Larne the throbbing diesels bring me back to a similar scene played out in November 1997 in Stranraer. Should I have staying in Scotland or was I right to make the move to Eire? Half a lifetime has passed and although I am 99% sure I was right to leave Scotland that pesky 1% still can still itch like a hair shirt sometimes.

These dark and unsettling thoughts are of course tempered by the knowledge I am on my way to see my kith and kin. It takes only 12 hours to get from Mayo to Aberdeen, quicker sometimes if the traffic gods are smiling down on me. You would think that I should be able to fit in more trips to the North East but remember that is 12 hours to get there and another 12 to get back. That is essentially two days driving. Two or three days in Scotland and you are looking at virtually a week away from work. It is a heavy commitment when free time is so short. 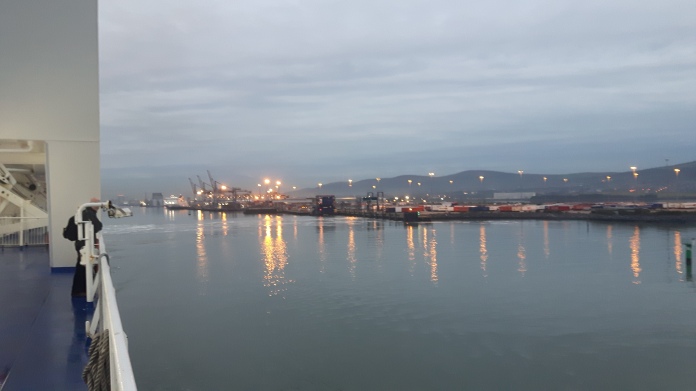 the lights of Belfast receding

The road journey across the Ireland never ceases to delight me, no matter how often I make the trip. There is a good road all the way to Sligo these days with little traffic and only a few speed cameras so I can judge the time this leg will take fairly accurately. An hour and five minutes sees me turning right on to the N15 just after I cross the Garvogue river. The tarmac twists like a writhing snake as it climbs up to the edge of the hill overlooking Glencar. If time allowed it would be lovely to stop and take in the spectacular views but that particular luxury is rarely if ever afforded. Instead the 40 kilometres to the border require some concentration as the bends and road works through Leitrim are probably the most hazardous part of the whole journey. Late one night many years ago I lost the first power steering, then the hydraulic suspension and finally the brakes on an elderly Citroen on this part of the trip back from the ferry. I limped home in the blackness using the gears and hand brake to slow the car. Thankfully most journeys are usually less perilous.

The road between Sligo and the border is being improved with some of the worst bends being bypassed or straightened. This will help a lot as it has been common to find yourself stuck behind slow moving traffic on this stretch with few places to overtake. 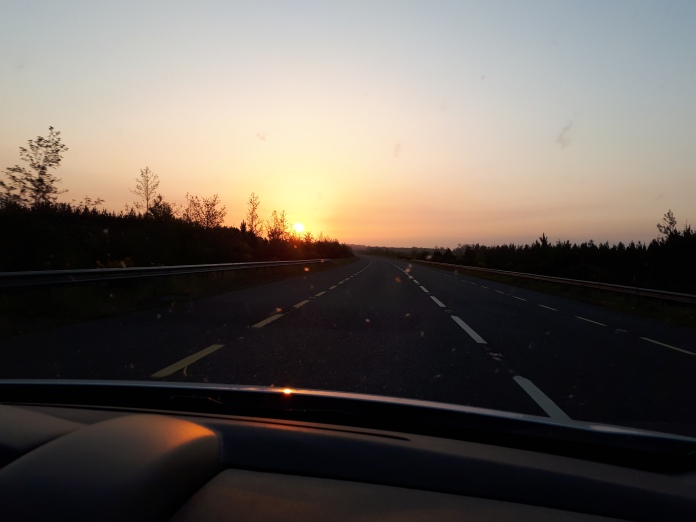 I reach the border where Cavan looks across the river to Fermanagh at the village of Blacklion. I thought I would never again see a hard border there, feel the trepidation of rolling down the window for the armed Guard to ask the pointless questions such as ‘where are ye going’? Brexit will inevitably see the paraphernalia of a hard border return to an area which really does not need any more problems. The watch towers, the guns, the suspicion and, sooner or later, the violence. Westminster will get its blue passports and Ireland will get crimson blood on the streets. 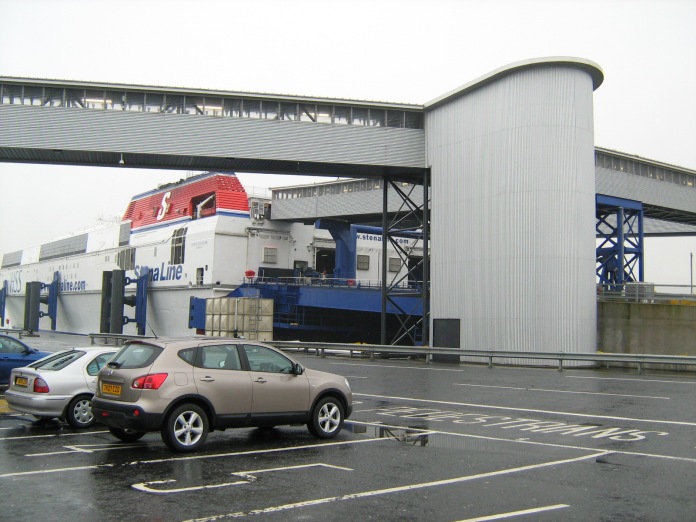 Waiting in the queue for the Stenna ferry, Belfast harbour

A few miles further on (yes, miles now, we left kilometers back at the border) I pass through the tidy little town of Enniskillen. From here on the roads are good and you can feel the change all around you as the neat fields and well-tended villages of the Clogher valley slip by. There are the flags of course, proclamations of Ulster Scots identity so nobody is an any doubt that this is their land.

40 miles from Belfast the A5 becomes the M1 at Dungannon and the pace of travel changes again. Depending on the time of day it can either be a straight run to Belfast or rush hour snarl up in tailbacks nearer to the city. When I working in Belfast I could judge the fine points of the tailbacks to a minute degree and duck through the many rat runs to get to work on time. Nowadays I try to avoid catching a ferry which departs near rush hour. Indeed, I find the night sailings much handier and a lot less hassle.

Belfast is an enigma to me. Full of salt-of-the-earth types rubbing shoulders with armed lunatics. It used to terrify me when I passed through during the troubles. The thought of taking a wrong turning and ending up in the wrong place at the wrong time used to flood my brain. I know people who still regard Belfast as the most dangerous place on the face of the planet. Later on I worked in Belfast city centre for a couple of years, affording me the opportunity to set aside my fears and get to look more closely at this complex wee city. Gradually I grew to like the city but can’t say I ever fell in love with it. It reminds me of Glasgow in many ways. 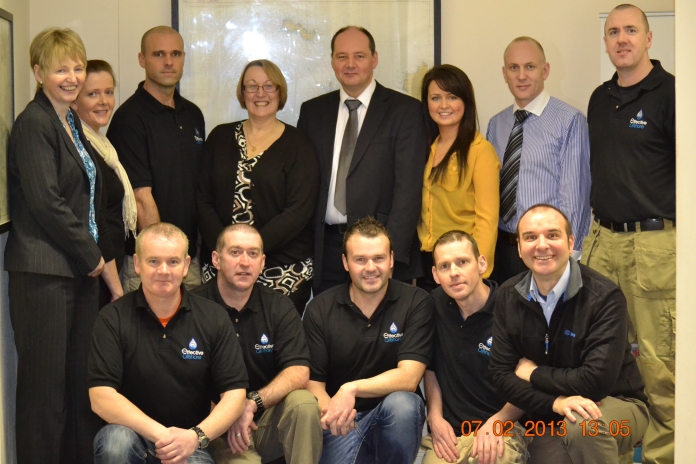 The EOL guys from the time I was working in Belfast

The ferry is a welcome break from the driving and those couple of hours on the water gives me the chance to grab a quick bite to eat and, if it is a night sailing, some welcome shut-eye. With nearly 5 hours driving once I land in Scotland even an hour’s sleep has value to me. I pack a sleeping bag so that I can find a quiet corner to close my eyes for the duration of the crossing. I have often been awakened from my slumber by the juddering of the ships engines as it makes the final maneuvers before docking at Cairnryan. A mad few minutes ensues while I am scrambling out of the bag, rolling it up, pulling on my boots and a quick nip to the toilet to freshen up before scampering down to the car deck. Still rubbing the sleep from my eyes as I turn the key in the ignition and switch on the lights. Then the slightly surreal feeling of driving off the ferry and on to Scotland. 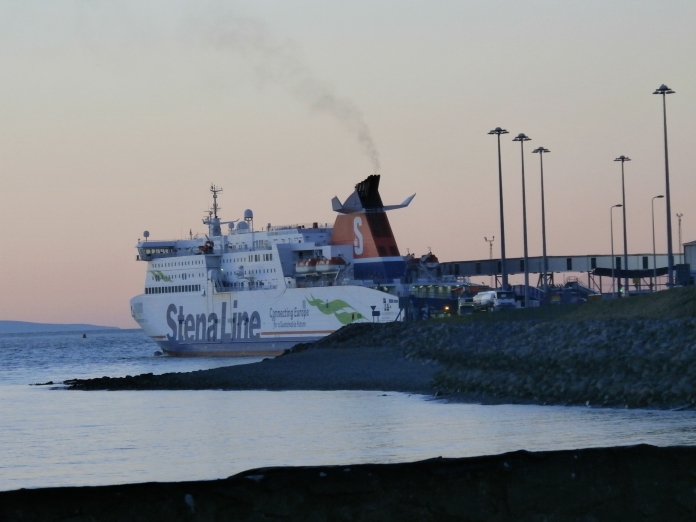 Cairnryan and the Stena terminal there

I lived in Ayrshire for about 4 years and got to know the Clyde coast during that time. Angling, work and socialising brought me to many of the local towns and I’ll admit to having a soft spot for this part of my motherland. Ayr was a lovely town to live in with some great eating and drinking spots to frequent. I tick off the villages and towns as I make slow progress up the tortuous A77. Ballantrae, Girvin, Maybole then finally Ayr and the blessed relief of dual carriageway. A couple of roundabouts between Ayr and Prestwick then slip into top gear and settle back for the cruise across Fenwick Moor and on up to Glasgow.

I love Glasgow, I always did. Oh I know it’s dirty and violent and is possessed by various other unpleasant traits but I can’t help loving it for the insanity of the city. It has been knocked about by everyone from Hitler’s bombers to the urban planners yet it still retains a character all of its own. 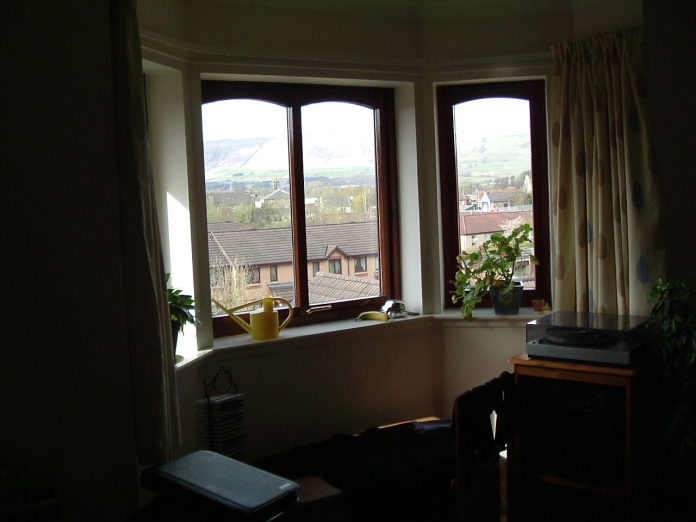 The motorways slice through the very heart of Glasgow, none of your ‘orbital’ shite here. Six lanes of reeking internal combustion engines, bumper to bumper, crawling and honking their way through the very guts of the city every day. If I happen to be passing through Glasgow during opening hours I peel off the M8 and spend a pleasant hour or so in the Glasgow Angling Centre, buying stuff I don’t need and marvelling at the complexity of my sport. As a kid I owned one rod and reel and got so much fun out of that simple outfit. Now I own dozens of rods and yet don’t get the same excitement that I did in the past. A lesson for me? 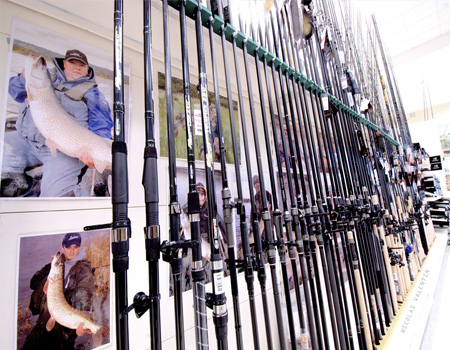 Leaving the M8 I pick up the M80 and swing north once again. This section of the road has been improved over the years so the dreadful tailbacks appear to have reduced somewhat. Past Cumbernauld, under the arches and over the brow of the low hill and the sight of the Ochil’s marching away to the east. When I lived in Fife these hills were my playground, happy hours were spent walking the paths and admiring the views over Central Scotland. Ancient Stirling, the very cockpit of Scotland with its castle and tower comes and goes quickly as I cross the Forth’s tortuous loops. Only a couple of hours now and I will be in Aberdeen.

The mighty Tay is crossed on the edge of Perth at the extremity of the tidal reaches. I’ll be getting tired by now, the window cracked open to let the cold air in to clear my head and keep my concentration levels up. Ticking off the bypassed towns after Dundee, edging ever closer to the granite city. This time around I will do the Scottish part of the journey in the dark, missing the sights around me but enjoying the freedom of uncluttered roads. Arriving in the early hours there will be hugs and a quick chat before the soft bed envelopes me and I catch upon my sleep. Come the morning my family will be there and the catch up can begin in earnest.