Only catching my breath now after a somewhat manic weekend last weekend. A well-earned night away in Galway was followed with a day’s sea angling out of Westport and then a dash to Aberdeen. I will spare you the grizzly details of the night in Galway but here is a quick report on Westport sea angling. 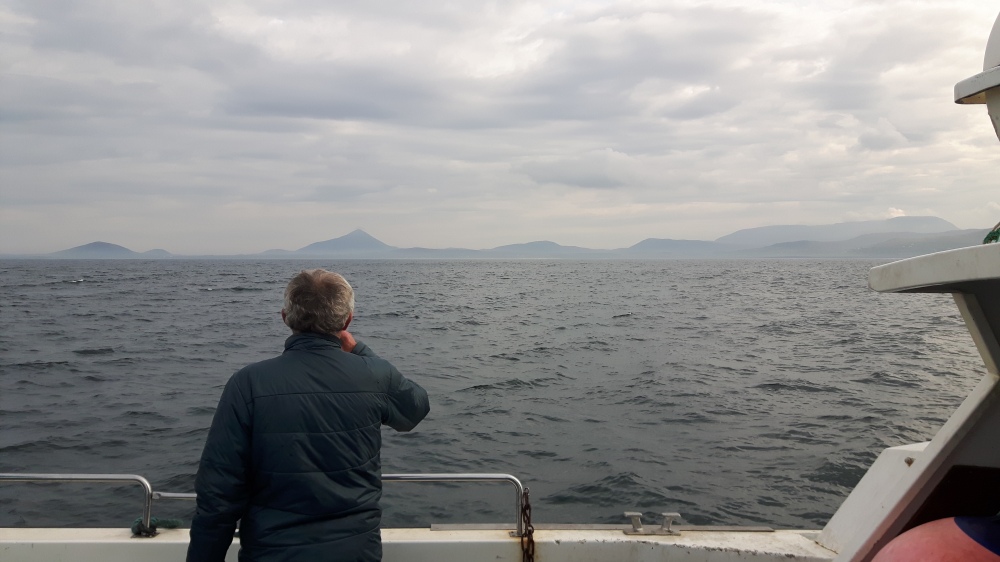 This trip was hastily arranged by Pat McHale and bore the hallmarks of a social occasion rather than a serious angling trip. Some of Castlebar’s finest threw their names into the ring and in the end 7 of us convened in The Helm on the quay in Westport on Sunday morning. Breakfast was greedily consumed and the banter was in full flow before the last sausage had been swallowed. Charlie, our skipper for the day appeared at the door and proceeded to round us up like a good sheepdog working a flock of errant ewes. Chastised, we headed for the pier and the ‘White Sea Horse’ which was berthed half way along.

There are only 2 charter boats working out of Westport now and these cater as much for non-anglers who just fancy giving a go feathering for mackerel when on holiday in the town as the serious sea anglers. You can hire tackle etc. on these boats which was just as well as some of our gang turned up sans rod, sans reel, sans just about everything and got the gear from Charlie. I, of course, turned up armed to the teeth and capable of taking on anything from herring to halibut. It turned out I need not have bothered with so much ironmongery.

It was the day of the boat lift in Westport 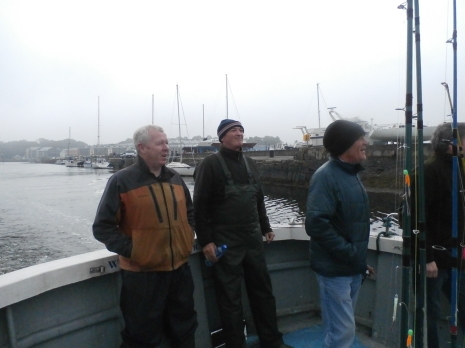 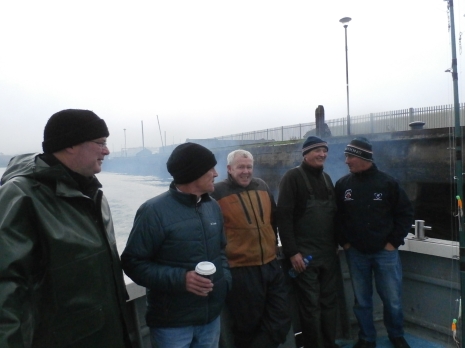 A fine body of men

One of the joys of Clew Bay is the spectacular scenery and as the mist rose we were treated to some glorious views of Mayo in its finest. The reek was clear but mist wreathed Clare Island and the whole north coast of the bay. Soon after clearing Bertra we were joined by a pod of dolphins who played in our wake or a while. I tried to capture a few pics without success but Kev caught them on video:

Out past the South of Clare Island we dropped lines and tried for Mackerel but instead encountered smallish Pollock hard on the bottom. Shifting to a new mark the same scenario was repeated, then again and so on until eventually we started to hit better sized Pollok and the odd Cod. I mixed things up a bit by boating a pretty little Cuckoo Wrasse.

The interesting thing was that colour of the feathers we used seemed to matter. Black or white feathers were the most successful early on in the day but by lunchtime these were shunned and greens, blues and luminous hokis took most of the fish. Charlie reckoned the water was a bit coloured and that was why the blacks and whites were successful. 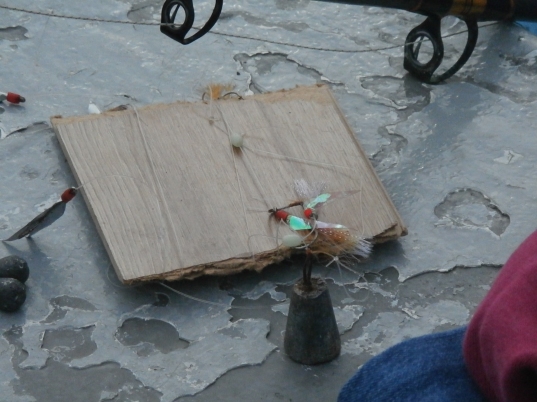 The box filling up nicely

The crew were sounding decidedly mutinous as the day wore on, the idea of a few pints in the hotel on Clare Island gathered momentum but Charlie staved the insurrection off by cunningly providing a huge pot of stew for all hands. By now we were in the midst of a large shoal of good sized Pollock and every drop was greeted with a gratifying thump and one or sometimes two nice Pollock coming up to the boat. Most were safely released but I kept a few for the freezer. The other lads had been steadily filling a box at the other end of the boat.

I passed on the stew, I was having too much fun with the coppery Pollock right then. None of them could be described as leviathans, just your normal Clew Bay fish of two or three pounds. But I love Pollock, that powerful first dive when they feel the hook still thrills me even after a lifetime of catching these game wee fish. The fact that they also make excellent eating is a great bonus too. Here in Ireland there seems to be a resistance to eating Pollock, something which baffles me. Their firm white flesh is excellent when eaten fresh from the sea and is only slightly inferior from the freezer. Plain grilled, pan fried in olive oil, baked with white wine and tarragon or even with coconut oil, lime juice and ginger, I enjoy this fish cooked in all manner of ways.

A few Saithe put in an appearance and I kept a couple of them for making fish cakes. These are another vastly under-rated fish and while the grey flesh looks particularly unappetising when raw it cooks well and makes the best fish cakes ever.

I thought that feeding the hoard would stem any thoughts of additional beer, but no, the cry went up again – Clare Island! Charlie eventually relented and we wound in and headed East. While the lads stomped off in the direction of the hotel I set about filleting the catch. My preferred tool for this type of work is an old carbon steel knife which my father gave to me many a long year ago. I’d say it dates from the late ‘60’s and it still takes a good edge with a few brisk swipes of a stone. The gory work progressed at a steady pace and most of the catch was reduced to a pile of block fillets by the time the revellers returned to the boat and the journey home to Westport.

The eastern sky was dark by the time we tied up at dead low water in Westport and the air was turning cold again. I was setting off for Scotland in the early hours so I left the lads to enjoy a final dram to round off the day. It had been a good day with plenty of sport but surprisingly we did not encounter a single mackerel. I had badly wanted a few both for eating and as bait for the next few weeks but it was not to be and the commercial boys have cleaned the bay out of macks once again. Looking into the future it is hard to see how the species can survive such heavy pressure, surely there is a limit to how many fish can be taken?

At home I washed the rods and reels out by rinsing them in the shower, failure to do this will cost you dear. A sized reel is no fun so simply running warm water over everything after a day in the boat is a small price to pay. I make sure the rollers on the rod receive the same treatment as they can stick and wear your expensive braid in no time at all.

Chores completed I put my feet up for a while before retiring to bed. The alarm went of at 2.15am, time to head across the North Channel and back to my homeland.