Friday night’s revelries led to a very tired Colin this morning which was not good as Ben and I had an arrangement to launch another boat on Lough Conn. Scrambling out of bed and into some fishing clothes, I noted the blue sky and stiff breeze moving the trees in the garden, scattering the last of the cherry blossom. The forecast of a cold and windy day looked about right. I looked out the 11 foot fly rod and prayed my wrist would stand up to a day casting with the brute.

We set off around the planned time and chatted about the fishing as we drove up to Pike Bay.  It’s a handy spot, nice and sheltered with good access to the whole lough and the added bonus of a couple of good lies near at hand. Launching went smoothly and we were soon out on the water in a wind which was much more Easterly that the forecast Northerly.

We adjusted plans accordingly and fished the lies in and around Pike Bay itself, but nothing fishy showed any interest in our flies. So we switched to trolling and dragged spoons and Rapalas all the way down to Massbrook. Once again, no stir from the fish.

With a more favourable wind behind us we drifted the lies on the Massbrook shore. No hatch of flies today which was a disappointment for the third week in April. Lake Olives are usually appearing in reasonable numbers by now but today must have been too cold for them. We trolled for a while again, retracing our passage back up to Pike Bay and then beyond into Castlehill. Enthusiasm was waning fast in the face of an apparently empty lake so we pulled into the shore for nourishment and a stretch of the legs and to take some photos.

Water clarity was good on the East side 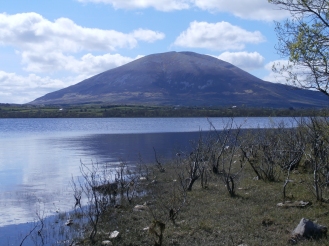 As is my want, I prowled the edge of the water, flipping rocks to see what lived there. In amongst the usual louse and shrimps I came across  the imposing shape of a Dragonfly Larvae. Brian Clarke referred to these beasts as ‘the Ghengis Khan of the lake’ as they eat anything smaller than themselves.

Tea break over, we decided that enough was enough, so one last drift at the pole outside of Pike Bay would provide a final chance for today. The wind took us just to the inside of the pin which marks a shallow some 50 yards from the shore.

Ben’s deft oar strokes kept us just clear of the marker and my cast, like hundreds before landed 15 yards in front of the boat. Half way back to me a solid tug and a flash under the surface woke me up somewhat abruptly. A Springer!

He wasn’t big but he certainly was lively. An initial short, boring run culminated in a spectacular jump before he charged off towards open water. Next, he came up to the top and danced across the surface in a kind of rolling tailwalk. The next 10 minutes saw him circle the boat 4 or 5 times and kept me guessing right up to the end. Ben netted him on the second pass as the fish tired. A new fish, not sea-liced but a bar of silver never-the-less. Around the 7 pound mark he had taken the Green Peter fished on the bob. Time only for one quick photo before he was slipped back into the water.

We squeezed in one more drift before packing up but the lone springer was the only action we saw all day. No matter, at least we met a fish and breathed some good, fresh air. That boat will get good use over the next few weeks!